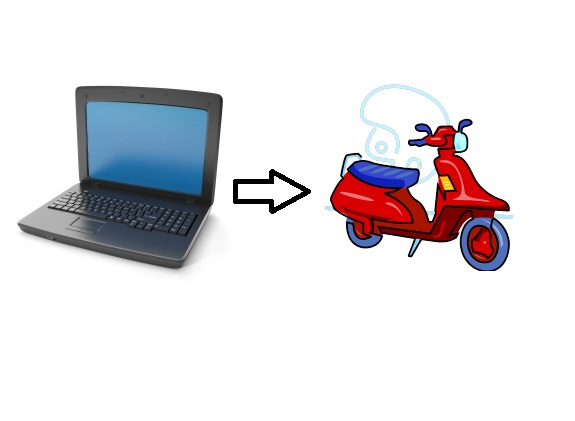 Do you have $10 right now? How would you like to have $10,000 instead? Let me be the first to tell you that it’s entirely possible! Of course, you’re not going to just walk up to a store and say, “Here’s $10, I’d like $10,000 please.” That’s just completely ridiculous. Tranforming your pocket cash into a wad of hundreds is going to take patience and persistence. But I am 100% certain that it can be done through a magical thing called bartering.

Kid Barters an Old Phone For a Porsche

I read a story a while ago about a 17 year old kid that got a free cell phone from his buddy (his friend upgraded and had no use for the old one), and through various trades, was able to land himself a Porsche! You might think this is completely impossible, but let’s walk through his trades. First, he traded the phone for an iPod Touch (someone really had a need for the phone, and could easily do without the iPod). Then, he was able to trade that iPod for a dirt bike, which allowed him to later aquire a Macbook Pro, and then an old 1987 Toyota 4Runner. He traded the 4Runner for a Bronco, and then made his final trade for the Porsche!

I Could Never Do That!

I know what some of you may already be thinking. You would never have the skills to make these trades and later find yourself sitting in a luxury car, but I disagree. It doesn’t take a professional salesmen to make these deals. All you have to do is find someone with a need and have the item to fulfill it.

I’d say one of the best trades that 17 year old made was the Macbook for the 4Runner, but the actual transaction was quite simple. The owner of the 4Runner desperately needed a laptop for school, and they had an extra vehicle lying around that he never drove. It was a great deal for both parties! Barter Boy got himself a vehicle, which was most likely worth more than the laptop, and the student got his laptop without having to shell out $1,000 at the store. It was a win-win, and as long as you find these situations, I believe that you can turn $10 into $10,000.

How to Get Started

By now, I’m sure that you’ve heard of Craigslist. It’s nothing but a glorified classified section taken to the web, but with thousands of viewers each day (for your area alone), it’s an incredible tool for your bartering game. In fact, there’s an actual barter section within each city for you to post your product. First things first though, you have to find that item to barter!

What Do You Have to Barter?

To start this bartering process, you’ll have to figure out what’s in your house that other people might want to have. Actually, to put it more clearly, I’d look for something that another individual has a desperate need for or that they have a severe want for. Perhaps you have some firewood (people are in definite need of heating their house this winter), a spare tire that’s been sitting in the garage, or maybe you have an old cell phone laying around as well! Post your item(s) on Craigslist and wait for the calls to come in. Let them offer you anything they’ve got, but just remember, it has to be something that a large group of people are going to want/need.

Working Your Way Up

Obviously, in order to work your way up to the $10,000 mark, your second item is going to have to be of a higher value than the first. It doesn’t have to be by much, it just has to be a start. For example, maybe you could trade some quick handy work for an old snow blower. You could trade that firewood for a video game console. Maybe you could trade that cell phone for a space heater. Each of these items – the snow blower, the video game console, and the space heater, would be of definitely interest to quite a few people in any area.

From there, you simply have to trade up again. With that video game console, you could acquire an entire skid of drywall (which is great for those that are trying to finish up some house projects and don’t want to pay $10 per sheet at the store – after all, drywall is drywall, used or new). With the space heater, you could maybe get your hands on a moped (which is great for those that don’t want to pay a ton of money on gas). I think by now you get the drill.

Trade your way up and up and you’ll soon find yourself in a position to barter for a vehicle. That’s when things could really start to take off. After all, the higher and higher value items you acquire, the less the price difference really matters. It becomes more a matter of want and need. When you are trading someone your $4,000 item that they really want/need, they’d probably be willing to trade you something that’s worth $5,000 that they never use.