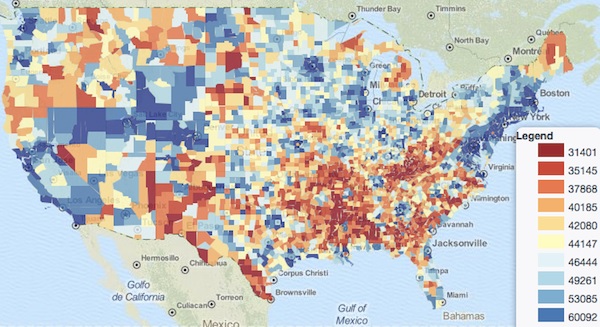 Want to know where you can live cheaply, but still make an impressive income? If you have thought about this before, then you are way ahead of where I was just a few years ago. When I graduated with my finance degree back in 2008, my home town region of West Michigan didn’t seem to be hiring anyone. So, I accepted an invite from my buddy and drove down to Boca Raton, Florida to try to land a job and start my career there (and to be honest, maybe catch a little bit of that beach life as well). I had absolutely no idea that some areas were known for their low salary and high expenses, but I was about to learn this the hard way.

I can tell you right now that one of the top cities to grow wealthy is NOT Boca Raton, FL. After a few months of searching, I was able to secure a job with a starting salary of $33,280. My one bedroom, one bathroom apartment (which was 15 minutes outside of the city) cost about $1,000 a month, which meant that after taxes nearly half of my take home pay was going toward my rent….this is most certainly NOT how one becomes wealthy.

If I was a bit smarter, I might have thought a little harder about where I was moving in order to grow my career and ultimately, my net worth. After graduating from college, instead of heading to the beach and earning next to nothing, I probably should have thought to myself, “What is one of the top cities to grow wealthy?” In other words, where could I find a job that was going to pay me a ridiculous amount of money and cost me next to nothing to live in the area?

In order to find the best cities to grow wealthy in, we must first find the areas that pay out the highest median incomes. Study the map below for a moment. The dark blue spots pay out the most money, the lighter colors pay out an average amount, and the dark red areas pay out the least. Some of the areas that pay out the most money are Chicago, San Jose, Seattle, New York, and Boston since they are shown in dark blue. However, these still might not be the best areas to find work since they might be incredibly expensive (as you may already know).

This leads us to look at a heat map of the overall cost of living. The dark blue areas are the most expensive, followed by light blue, then dark green, then light green, and finally the yellow regions are the least expensive areas to live. Sure enough, San Jose, Seattle, New York, Boston, and Chicago are all incredibly expensive areas to live. So, while the job description might be enticing because of the huge salary, your living expenses are pretty much going to eat up your whole paycheck anyway. So if you’re looking to put some money in the bank, these are not the areas to live and work. 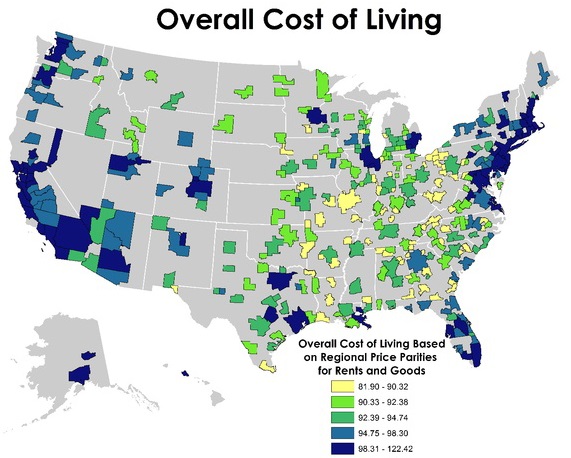 So where are the top cities to grow wealthy in the United States? After overlaying the two maps and researching other “great places to live” online, I have compiled the top 10 list below.

Where’s the absolute best place to make a large income and keep your living expenses down at the same time? Round Rock, Texas, where the cost of living is 99.3% of the United States’ average and the median income is incredibly high at $70,896. Common occupations in this area are computer specialists, general management, and electric equipment mechanics.

Next on the list of the top cities to grow wealthy is Temple, Texas (I guess Texas is the place to be if you want to make bank). The cost of living here is 84.2% and the median income is $50,437. The wages are obviously lower, but with such a low cost of living compared to the United States’ average, the overall earnings land Temple, TX in 2nd place. The most common occupations include sales drivers, truck drivers, and production supervisors. 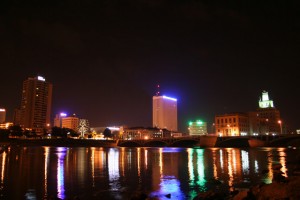 If you’ve always wanted to move to Iowa, here is yet another reason. Placing third on the list of “the best cities to grow wealthy” is Cedar Rapids, Iowa, where the cost of living is only 89.2% compared to the U.S. average. And, the median income is a fairly solid $51,429 per year. Common jobs in Cedar Rapids are computer specialists, production supervisors, and general management.

Fourth on the list is Norman, Oklahoma where the cost of living is 88.2% and the median salary is $49,210. The most common jobs in this city are general management positions, post secondary teachers, and sales people.

Charlotte, North Carolina is one of the few cities near the eastern seaboard where it’s is actually advantageous to live. The cost of living is 94.3% and the median yearly income is $50,950. If you’re interested in working here, some of the most common jobs available are general management, truck driver, and business operations specialist.

Apparently there is more in Nebraska than cows and corn stalks. The most common occupations in Lincoln are actually general management, material scheduling and dispatching, and post-secondary teaching. The cost of living is 90.5% of the overall U.S. average, and the median salary is $48,070. Not too shabby!

It probably wouldn’t surprise you that living wasn’t all that cheap in Colorado Springs, CO, but the earnings potential is high enough to get this city into the top 10 cities to grow wealthy. The cost of living is 100.9% and the median salary is $52,622. So what type of jobs are available in Colorado Springs? The top jobs are currently general management, building cleaning and pest control, and engineering. 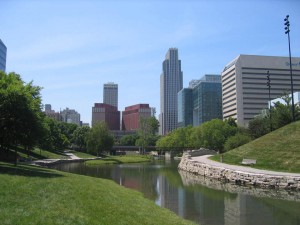 First of all, I would live in Omaha just to buddy up with Warren Buffett. That’s right, it’s his home town! The cost of living in Omaha is quite inexpensive at 88.1% and the median income is $45,159. The common occupations in Omaha are general management, building cleaning and pest control, and cooking.

Oshkosk came in at number 9, mainly because of their low cost of living (89.8%). The median household income one can expect here is $45,587 per year. And, if you decide to work in Oshkosh, chances are that you’ll be heavily involved in production, as the most common job there is production work and supervisors of production. This is followed by metal and plastic workers, and then laborers and material handlers.

Coming in at 10th for the best cities to grow wealthy is Durham, NC. Durham is only slightly cheaper than the average city in the U.S. at 97.6%, but it boasts a pretty solid median salary of $49,332. The most common occupations in this city are general management, post-secondary teachers, and life and physical scientists.

Have you ever considered living somewhere because of the low cost and the high potential salary?

Median Incomes and cost of living data were provided by City-Data.com and BestPlaces.net, respectively.