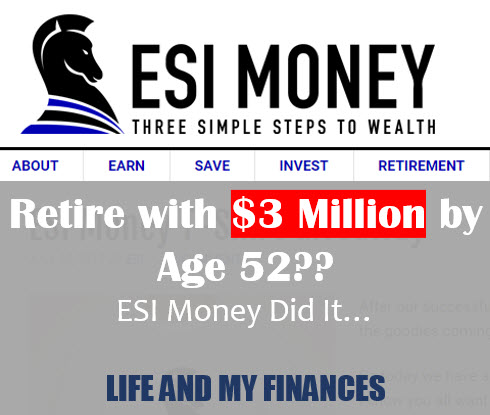 When someone does something absolutely extraordinary, I can’t help but stop and ask them, “How the heck did you do that??? (and where do I sign up?)” (Like Michelle Schroeder-Gardner who earned nearly a million bucks just by blogging last year! Holy crepe suzette!!).

…And then enters ESI Money, a man that retired at the age of 52 with over $3 million…. Yeah…I’d like to talk to this guy too!

So naturally I asked if I could interview him, and again (to my surprise), he said “Absolutely!”. So here we go. Let’s figure out how to be multi-millionaires together.

Enter ESI Money (he likes to keep his identity private with this chunk of change, and I don’t blame him!!) – he’s a normal looking guy with a wife and two kids starting college this fall. He went to college for his Bachelor’s, and then ducked right back in to get his MBA. From the start, ESI Money proved his worth in Corporate America and earned a pretty decent salary during each of his 28 working years because of it. BUT, unlike many, he was able to hold onto it (and grow it) into a HUGE sum!

Alright ESI – here’s some questions for ya! I want to know how you did it!

1) When did you first start investing? And how much did you put away a year during each stage of life? In other words…did you always max out your 401k and call it good? Or was it a bit more erratic (or maybe sophisticated) than that?

“I started investing soon after my wife and I were married in the early 90’s.

She had some retirement funds and I moved them to Vanguard.

I also opened a Vanguard brokerage account for us and we invested through both it and my company’s 401k.

We always maxed out 401k contributions while at the same time paying off debt (our mortgage). This is one of the benefits of a higher income — you don’t have to decide whether to save or pay off debt — you can do both.

Back in the day our mortgage was at something like 8% so paying it off early was a no-brainer “investment”.

Throughout the 20 years I’ve tracked our finances on Quicken, we saved an average of 36% of our gross income.

BTW, we paid off our mortgage in a few years and haven’t had debt for 20+ years now.”

Related: Should You Pay Off Your Mortgage Early? Or Invest?

2) You earned a great salary throughout life because of your education. Would you recommend that others follow the same path today? Is it as accessible (sometimes I think that there’s so many kids going to graduate school these days, it’s tougher to get ahead)?

“If I had to do it over again these days, I would get an MBA again. It was one of my best financial decisions. It also allowed me to progress through the ranks which made my jobs much more interesting and challenging.

Here’s what I’d recommend for students these days related to education:

These tips work with or without an advanced degree, so I’d leave it up to the student to decide on which path works better for him.”

3) When did you first contemplate early retirement? Was it always a goal of yours?

“I first thought of early retirement soon after I got my first job — because it was so stressful! 🙂

But I seriously began to think of it in the early 2000’s. At that time “early” meant 60 or under, so that was my general goal.

One of my early mistakes was not writing down a specific goal, so I simply floundered for a few years. I saved a ton of money and made progress towards retirement, but I wasn’t as intentional as I should have been.

I thought I needed $4 million to provide the retirement lifestyle I wanted, but this was simply a rough guess. Once I bought my rental properties and actually created a mock retirement budget I realized I had just about enough income to retire whenever I wanted.

After a couple of rough jobs I decided I had had enough and decided to take the leap.”

4) This is a biggie — health insurance. I think my wife would freak out if I ever lost my company benefits. What did you discover when you looked into buying insurance for yourself? Do we all make it out to be a bigger deal than it really is?

“We researched the options and went with a health sharing ministry. So far, it’s been very affordable and covered me when I had a recent bout with skin cancer.

Time will tell whether it’s a good decision or not but we’re not freaked out about it in any way.”

5) Your site has been growing at a rapid rate and is now starting to earn some nice money as well! Do you ever think you’ll earn more money with your website than you did in your career job?

“No, I don’t think I’ll ever earn as much on my site as I did in my career. That’s a pretty high hurdle to jump over! 🙂

My initial goal was to earn about $20k per year to diversify my retirement income sources.

I’m just about at that point now without really trying that hard (I’ve spent most of my time on writing content and driving traffic — the revenue can come later), so I’ve changed my goal to $50k per year.

We’ll see how that goes but I always like a new challenge.”

Related: How to Start a WordPress Blog on iPage for Just $24 (and that’s for the entire 1st year!)

6) For most people, making the transition from earning money to spending it (ie. entering retirement and spending your investment money) is paralyzing…which keeps them at work. How did you overcome this? Is your retirement fund going down?

“I understand the fear. You go from doing something you’ve done your whole adult life (working) to something completely unknown. Even when I had substantial assets I felt a lot of uncertainty, so I get it.

But you just need to take the leap…

If you’ve done your homework, have a very accurate estimate of retirement spending, and are sure that you can cover your expenses, then just do it.

One key is having a few margins of safety just in case. These help give you some peace of mind.

You may be freaked out for the first week or so afterwards, but once you settle in, it’s great.

And, we actually live off the income generated by our investments and thus don’t draw down the investments themselves.”

7) Say you’re standing in a room with a 20 year old and a 50 year old, and they’re both asking you what they should do to retire well. Would you give them the same piece of advice? Or totally different? What would it be?

“The keys to growing your net worth (and thus retiring well) are to earn, save, and invest (ESI — thus the name of my site).

The more you do of each of those, the better off you’ll be.

The 50-year old would obviously need to do a lot of earning, saving, and investing if he waited until that age to get serious about it. But even so, if it’s done right, he could retire in 10 years or less.

The 20-year old has a HUGE advantage — time. If he starts the process at his age, he can easily retire by 40 and even earlier if he wants to push it.

The advice I’d also give them both is that you need something to retire to.

Want to Retire with $3 Million?

Of course we all want to retire with $3 million! Who wouldn’t?

So what is it that ESI Money did that the rest of us can emulate?

BOOM! For the most part, it’s pretty basic, and that should give you a TON of encouragement! Anyone can save up this kind of money. You just have to be intentional, have a goal, and put aside a bunch of money for your later years.

Will you retire with $3 million? What was your biggest take-away from this interview?