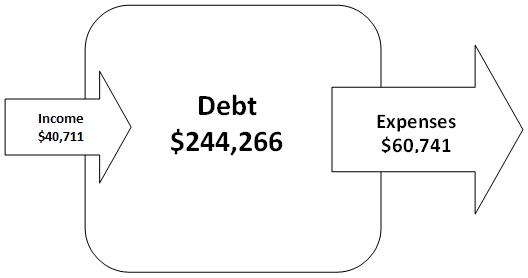 It hasn’t been much of a secret that the U.S. economy has been struggling for the past couple of years. We have all felt it. Some of us have lost jobs, businesses, and quite a chunk of our retirement savings. But, since the citizens of the U.S. are struggling, guess who else feels the pain? You got it, the U.S. government.

In order for them to continue to operate, they need an income just like the rest of us! And, since many of us have a lower income compared to past years, the government makes less in taxes.

If you have put together a budget for your household (if you haven’t done this, you really should!), you first try to total up how much money you make each month. Next, you make an estimate of what your expenses are. If you’re lucky (or if you are already wise financially), your expenses total up to less than your income, which would allow you to save and invest. If you want to live on this earth without ticking a bunch of people off (because you owe them money), then this is probably the plan you’re going to want to stick with.

As I go through my own budget, I sometimes wonder how my income-to-expense ratio would compare to that of the government’s. I mean, I know the government deals with billions of dollars instead of a few hundred bucks here and there, but their expenses should still be less than their income, just like mine.

Thanks to this great find from my wife, I don’t have to wonder any longer (and neither do you, because I am generously sharing the information)!

Government Spending Scaled Down to the Average Household

Thanks to ChamberPost.com, I know have a great understanding of how the government is handling their money.

The government currently has a set income which is dependant on our tax dollars. If we scale that income down to the average household income, we can say that they currently make $40,711 a year. Using this same ratio, that means that their expenses are $60,741 a year! So, according to these number, they are spending 50% over their budget each year! Granted, these are the numbers before the 60 billion dollar budget cut, but even if it passes, the expenses will still be equivalent to more than $59,000 per year, which still puts them $19,000 over budget!

And, as you’ve most likely already picked up on by the chart above, their current debt is equivalent to $244,266 when scaled down into the average household income!

This is actually a pretty scary picture. Unless the government decreases the expenses to be less than their income, that debt circle will just keep getting larger and larger. It looks like we’re in some serious trouble.

What are your thoughts when you look at this chart?