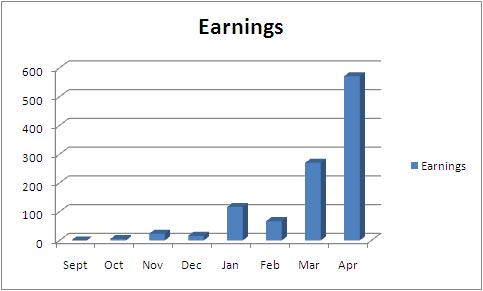 If you are reading this, you are witnessing the very first earnings report that is posted on LifeAndMyFinances.com! Many bloggers hide their earnings (I’m not sure why, because many of them are anonymous anyway…), but I figure, if I am blessed enough to earn some income by doing something that I love, I don’t mind sharing it with all of you, my loyal readers.

Plus, it’s your right to know what’s going on with the site since you are a part of it every single day. And, if my site performs well, that means that the giveaways get nicer! 🙂 I had a pretty good April, so as you can tell, there’s a $100 gift card promotion going on right now. I’ll always be good to my readers like that. Without you, this site is worthless (plus, it wouldn’t be any fun either!).

Income Report Since the Beginning

Since I have not officially shared an income report yet, I thought I’d show you the income of this site since the beginning (the very end of August, 2010).

As you can tell, it definitely takes a while to get things rolling. In September, 2010, I was super excited because I earned $5.10 through Google Adsense. As far as I’ve been told, I was actually pretty lucky to receive that much at such an early date.

Between September and December, my total income was less than $50, but then I was offered a writing gig. Beginning in late December, I began writing for another site with a set rate per article. That is the reason for the spike in January (and throughout the rest of the months).

This past month was a pretty exciting month. I never dreamed that I could earn such a large income so quickly through this medium of online work. Since quite a large amount of this income was due to one-time deals, I think it will be tough to repeat the performance in May. But, now that I know this is possible, I’ll have higher aspirations for the future!

I actually enjoy staff writing quite a lot. It allows me to get my site name in front of a whole new audience (who I can hopefully help through their financial issues), and ultimately improves the value of my site.

Since I do enjoy staff writing, and since it produces a solid income, I have agreed to staff write for a couple of other sites. I haven’t made any posts yet, but this portion of my income report should rise in the month of May.

These are posts that others pay me to put up on my site. In April, the pay for these posts have been good, but they have also been very beneficial to my readers. One of them was MicroMaximus, which is a service to automate the Reward Checking Account to guarantee the high yield payouts (our yield is currently 4%, which is awesome!). I had 5 sponsored posts in April, and based on the comments, it really seemed like you enjoyed them.

Some of these links are showing up on my homepage, but some are placed in old articles that most of you probably never read (not sure why they wanted them there, but it was a win-win that way, so I didn’t ask).

Thanks again for being a reader! I really couldn’t continue with this website if it weren’t for you. So, thank you!