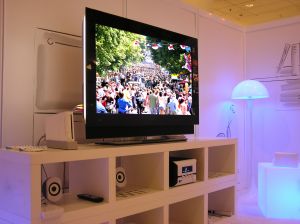 Do you ever get the feeling that TV is ruling your life? If I were asked this question a couple of years ago, I would have most definitely said “no”. After all, I wasn’t watching TV at every waking moment! I was going to school and had a job at the same time, so there really wasn’t that much time for television. But, now that I look back on those years, I would say that TV did impact my everyday life, and it wasn’t for the positive.

You might think that I’m going over the deep end when I suggest that TV is ruling your life, but I have seen it time and time again, and unless you make yourself aware of the situation, it seems completely normal.

When Mrs. LAMF and I lived in Florida, we were considering a new apartment complex because our current place was raising their rates. While we were in the office, I overheard a conversation between the property manager and some new tenants. “This unit would be perfect for you two, and it’s available next week!” explained the manager. “Well…. I’m not sure that would work…. we have a dish.”

REALLY??? Apparently a dish won’t work unless it’s pointing Southwest or something. But, because they obviously had a love for their dish network, they decided to forgo the awesome apartment and took a different one that most likely paled in comparison.

Recently, my wife and I have been ditching our house project to hang out with our long-lost friends (we can only work non-stop for so long, ok? 🙂 ). We invited them over to our house to take a look at our progress, but that particular night didn’t work out for them because “their show” was on.

A few nights later, they did find some time to stop by, but they could only stay for a minute because they simply had to catch this other show!

This time my finger is pointed at myself. I am a huge sucker when it comes to sports on TV, especially if it’s the Detroit Tigers or a popular PGA golf tournament (like the U.S. Open or something). Well, most of us know what October means – MLB playoffs, and the Tigers were doing well.

I have to admit that I dropped the house project for 5 or 6 days just so I could go to my parents’ house (we don’t have television) to see the games.

What’s Wrong With Us?

Why does TV rule our lives so much? Even though it was a short while ago, I barely remember what happened in those baseball games! If I would have skipped them and taken my wife out for a date, life would have been so much more fulfilling and memorable!

My Personal Benefits of Life Without TV

So do you think that TV rules your life? Have you ever thought about unplugging that cord and doing something productive!