The NEW Winner of the Apple iPad is….

As many of you know, I initially drew esoneht as the winner of the New iPad, but there was a little problem – she wouldn’t respond to my emails!! Unfortunately for her, I was forced to draw a new name. Just as I did before, I opened up the spreadsheet of entries and then picked a random number using Random.org. This time, the random number was a bit higher; 1,578.

This second chance winner was also a subscriber to the site. She came on board on February 19, 2012 and I’m guessing she’s pretty glad that she signed up! After sending her an email explaining that she won the grand prize, she actually responded quite quickly (to my relief 😉 ).

Let’s all congratulate Amanda S. on her recent win! She is super excited and I think she still may be in shock! 🙂 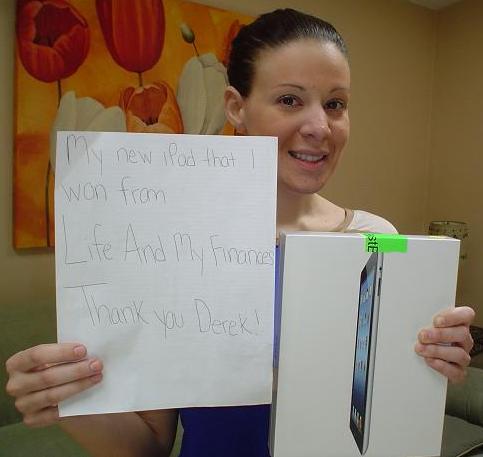 While I do enjoy giving away iPads, I was wondering if it might be a better idea to give away a bunch of less-expensive prizes so that everyone has a greater chance to win. What do you think? What prize would you like to see given away that’s $100 or less? A Kindle? Books? An assortment of gift cards? A free website subscription for a year?

Do you think a less-expensive prize is a better idea? What would you like to win that’s less than $100?