Cheap, Healthy Food for under a Buck 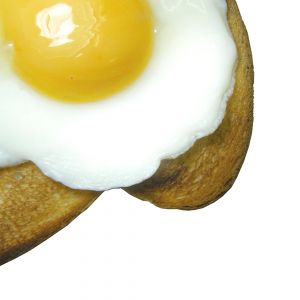 As newlyweds, my husband and I often spent the last few days of the month eating PBJ or made up meals like “Canned kidney beans topped on a baked potato with a side of whatever steamed frozen vegetables are in the freezer” just so we wouldn’t go over our grocery budget. I was a mentor/RA all four years of college so I could live and eat for free. It paid off (literally) since I only came out with $30,000 of student loans instead of $55,000+ but with that financial win came a loss for not knowing what good deals were at the grocery store. We’d eat like kings at the beginning of the month and like broke college kids by that fourth week. The best tip I learned from a fellow dietitian was to buy plain and add my own flavorings. With that said, here are a few of the cheapest healthy foods per serving that help keep our budget slim and delicious.

Two packets of instant oatmeal (makes 1 cup cooked) costs $0.80 total. One ½ cup scoop of plain oats (makes 1 cup cooked) from the 42-ounce canister costs $0.09 total. Two instant packets cost about 9 times more than the equivalent amount of plain oats! For a few cents more, you can top your plain oats with fresh, frozen, or dried fruit, nuts, spices, or stir in a couple dark chocolate chips (as a dietitian, I approve this topping).

There are endless options when it comes to beans so you don’t have to worry about getting sick of them. Half a cup provides the same amount of protein as an ounce of meat or an egg. Purchasing dried is the cheapest way to go- a bag of dried black beans can be found as cheap as $1.50 per pound. Cooking dried beans is a time commitment but I make a big batch and freeze portions so I can just nuke them in the microwave for a future meal. Canned beans are about $1 per 16 ounce can. You can even find deals on the cans that say “no salt added” if you keep your eye out. Remember that beans swell when cooked, so you’re really getting more than you think from a pound of dried beans. For most beans: 1 pound dried beans = 2 cups dried = 4 – 5 cups cooked beans ($0.04 per gram of protein)

One egg has as much protein as an ounce of meat and costs less than $0.20 per egg ($0.02 per gram of protein). While Bubba from Forest Gump can rattle off a million shrimp dishes, you can do the same with eggs. Scrambled, sunny side up, birds nest (cut a hole in bread and cook the egg in it), French toast, quiche, omelet, hardboiled, egg salad, your own version of the McMuffin…

Once a week the hubs and I do breakfast for dinner. A couple eggs ($0.40), homemade hash browns using a cheese grater ($0.50), some homemade salsa for the eggs (pennies), and ketchup for the hashies (a few more pennies) allows us to scrape by only spending $2 to feed two mouths. It does add a few more cents when we cook veggies in with the eggs, but not much. Potatoes get a bad reputation these days, but they are a good source of potassium and fiber as long as they aren’t in the form of fries or chips.

One 3-ounce can of Starkist Light chunk tuna costs $0.82 at my local grocery store. Even though the price per pound comes out to $4.37, you get 18 grams of tuna packed into $0.82, which means only $0.05 per gram of protein. That’s comparable to eggs and beans.

If you want to learn about more foods that give you the healthiest bang for your buck, check out the extensive list the Environmental Working Group put together.

What other foods have you found that offer the best nutrition for the cost?