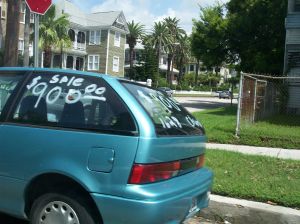 Have you ever found a great deal on a car by accident? Have you then thought about purchasing the car just to sell it and make a quick buck? If I had to venture a guess, I would bet that there are quite a few of you out there that have considered flipping cars, but there’s probably only a handful of you that have actually pulled the trigger and tried to earn a quick buck with a car flip.

When you first hear the word, “flipping”, what immediately comes to mind? That’s right, houses. We all know a friend of a friend that finds piece of junk houses, fixes them up, and then sells them for an overall profit. Flipping houses can work, but it takes hard work and it requires a ton of capital. So, rather than plunking $50,000+ on a house, why not take this concept to a smaller scale and flip some cars for a few bucks?

You Must Know Your Cars

About a month ago, I mentioned that I was looking for a more fuel-efficient vehicle. And, what’s one of the most dependable fuel efficient cars out there? The Honda Civic. So, for about a solid month, I watched the ads on Craigslist for this exact car. Since I’m not looking to spend my life savings on this car, I’ve really been looking for something that’s $4,000 or under, which lead me to browse all Honda Civics between the years 2001 and 2005. After looking at Civics every day for an entire month, you get pretty good at knowing what’s a good value when you see one.

When you find that car that you think is a deal, it’s time to ask yourself the scenario of the sale. Typically, if people don’t have much of a reason to sell other than “they just don’t use it that often anymore”, your “deal” is not a deal. When people don’t have a pressing reason to sell their vehicle, they typically do their homework and start out by pricing their car at a medium-high price, and then come down until somebody bites on their price.

So what’s the best scenario when you’re sniffing out a deal? To be honest, most of the deals you find could be due to sad situations. The car might have been willed to them by their father that recently passed away, someone may need the money to pay their mortgage or electric bills, or maybe a non-citizen is being evicted from the country. If the seller needs to sell the car quickly and can’t wait around for the perfect buyer who will pay their price, you could definitely have a deal on your hands.

After my month of searching for that perfect Honda Civic, I saw one that fit all of my criteria. It had no rust, was regularly serviced, had no dents, and was running perfectly as is. It needed absolutely nothing, and they had it listed for $3,000. Typically, a car like this would be listed for at least $4,000, so I was ready to jump on this deal before someone else did. When I called the number and asked why they were selling the car, they explained that they were leaving the country in 2 weeks and they weren’t coming back. Now this was a pressing reason that could lead to a deal!

Before you purchase a vehicle, it’s always a good idea to take it to a mechanic and have it checked out. If you aren’t able to take the car to a mechanic (or if you simply don’t want to), here’s a few things that you can do to be sure you’re not buying a lemon:

If you are convinced that you’ve found a solid car for an unbeatable price, it’s time to make the purchase and get it ready for resale. Here’s how you turn that deal into a money-maker:

Do you think you’ll ever try to flip a car? Why or why not?