Don’t Get Caught in the Debt Spiral 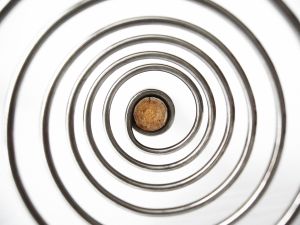 Debt is a part of our culture today isn’t it? Everywhere you go, there are offers for store credit cards and $0 down, 0% interest for 12 months! If we want something, but don’t have the money, we could still head to the store and buy it without a problem! After all, we’re good for the money. We’ll pay it later and we won’t even be charged interest on our purchase if we pay the bills fast enough. But, these simple actions can eventually lead us into the debt spiral, with little hope of escaping its clenches! Don’t let yourself become a victim!

How Does The Debt Spiral Start?

You might be surprised, but the debt spiral doesn’t often happen by being completely irresponsible. It could even happen to the best of us! But, typically it starts with a new car purchase. Very few of us have the money to buy a car outright, and it seems like everyone has a car payment, so we head to the dealership and find something that looks cool and has manageable payments compared to our earnings.

Between the car payment and rent (or your mortgage payment), there’s already $1,000 or more of your income that you can’t spend on anything else! This is just the very beginning of the debt spiral.

The Debt Spiral Gets Out of Control

When you have a car payment and a house payment, you are already limiting your cash flow each month to much less than what it could be. When you add on other necessary items like food, clothing, gas, and utilities, you might only have an extra $300 a month that’s not already earmarked when the month began!

Now, let’s say we have $900 saved away for emergencies (which takes quite a bit of work considering we only have 300 extra dollars a month – and that doesn’t even include having fun), but then something happens. Your roof springs a couple of leaks and needs total replacement. Your projected bill: $6,000.

Suddenly, you’re $5,100 in the hole and you feel like it’s almost impossible to get out! If you decide to cancel out any fun until your debts are paid off, it would still take you about a year and a half to pay for that roof! Do you think that maybe you’d have another emergency within that year and a half? I would almost guarantee it. Then the debt spiral begins to get out of control. Instead of paying your way out of debt, you’re only able to pay the interest and keep your head above water. If you have just one more emergency, you’ll most definitely drown.

How Can You Avoid the Debt Spiral?

It’s obviously very easy to get caught up in the debt spiral, so how can you avoid it? Let’s have a look.

1) Be Content With What You Have – In other words, don’t salivate over your friend’s new car or their $500,000 mansion. Understand that by having a roof over your head and a car to drive, you’re already more wealthy than 80% of the world’s population. Be satisfied and be happy.

2) Get Rid of Your Debts as Fast As You Can – Many people play what I call, “The Debt Game”. They avoid paying off debts because they think they can earn more money elsewhere. This might be true, but there’s never any guarantee. Also, they often forget to factor in those unknown expenses. If you can’t pay your bills, the bank has every right to take your possessions that you did not fully pay for. On the other hand, if you aggressively pay off your debt, you free up more cash and no one can take away your property.

3) Have Long Term Goals – Without long term goals, it’s very easy to spend money today simply because you have the cash in your account. If, however, you have long-term goals of retirement or travel, you’ll be less likely to spend your money foolishly on things that suddenly don’t matter.

4) Associate Yourself With Like-Minded People – If you hang around people that make a living on debt, it could be very easy to slip into debt yourself. After all, you’re still not as bad as your friends…. you only have a little debt compared to them. Associate with no-debt people and it will be very easy to avoid the gratifying things of today.

5) Give – When you open your heart to giving, you slowly begin to realize the poverty that surrounds you. Instead of planning how you’re going to get that new boat you’ve always wanted, you’ll most likely be more interested in helping the food pantries stock their shelves. When you stop thinking about yourself all the time, it becomes incredibly easy to avoid debt.

Do you know people that are headed for the debt spiral? Why do you think they get caught up in it?