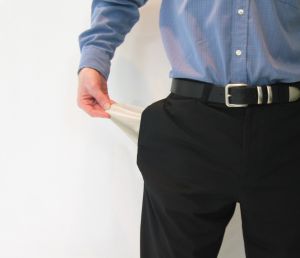 Back when I had a 9-5 office job, I would sit on an exercise ball at my desk. Over the course of a few years, my incessant bouncing must have taken its toll and the ball developed a small hole. While I didn’t realize it right away, the ball was literally deflating under my own rear end. It wasn’t until I came to work one day and the ball was noticeably flat on the bottom that I realized there was even something to fix.

Budgets can take on a similar phenomenon if you’re not careful. An ATM fee here, a latte there—all of these expenses creep in and, if left unchecked, can wreak havoc on your best laid financial plans.

Much like it was important for me to fix my exercise ball’s leak, it’s crucial for you to fix any spending leaks you might have. If you find yourself running out of money at the end of the month or can’t seem to remember the charges you made when it’s time to pay your credit card bill, you might have a spending leak that needs to be plugged as soon as possible.

Budget leaks are sneaky but if you’re willing to do a bit of work, they can be identified and plugged. Because budget leaks are often irregular and easily overlooked, you need to take that much more initiative when it comes to finding them.

One of the easiest ways to do so is to track your spending for a set period of time. Write down everything you spend; every penny—and I mean everything! Once you have your data (for at least a week but ideally a month), you should check the total amount you spent in various budget categories against what you originally planned to spend. If there’s a huge discrepancy, you’ve just identified one (or more) of your budget leaks!

Simply finding a budget leak means virtually nothing if you don’t plug it. You can do this by carefully examining why you overspent in the first place. After identifying the reason behind the ballooned spending, you next need to identify (and later implement) a realistic course of action that will help you plug the leak permanently.

Whether it’s changing your budget categories, rearranging the amounts you assign to each category or changing your habits in lieu of higher prices, you should plan to make these changes over the long term.

After you implement your new plan and changes, ensure you’re staying the course by continuing to track your spending and reconcile your budget categories at least monthly. If you see that you’re still having trouble meeting those numbers, you may want to consider more drastic changes to your routines and habits.

If you’re close but still need a bit of a push to get to where you’d like to be, consider adopting a cash-only spending policy as research has shown it’s much easier to not spend when you’re parting with cold, hard cash rather than handing over a debit or credit card.

How have you plugged any budget leaks?

This post was written by Jen, a staff writer from The Happy Homeowner