How to Trick Yourself into Saving 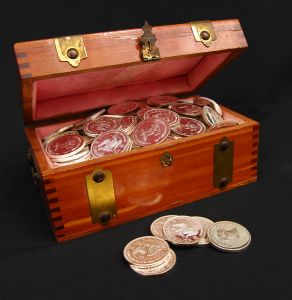 Sometimes it just seems hard to keep on saving. There are so many things you need or may want and you feel you really deserve to have them. Saving money involves so much more than just learning how to open a bank account or hunt for coupons or best deals. The ability to save money relies more heavily on psychological factors than it does on financial literacy or logical factors.

We successfully saved for years until we reached the point where we could really start investing and growing our wealth. It wasn’t always easy along the way and there were many temptations. To get through it, we used every trick we could think of to stay the course.

Here are some of the things we did to trick ourselves into saving.

We created a feeling of scarcity.

We knew that we were living paycheck to paycheck back then. To make sure we had enough in the checkbook to cover all the bills, I would subtract the amount of each bill out of the register balance before paying the bill and then wait until just a few days prior to the bill’s due date to pay it. This made for interesting times at month end to balance the checkbook, but it kept the money in the account and out of our minds until we had to pay the bill.

Today’s ability to pay bills automatically via bank withdrawals or auto bill pay on your credit card is nice, but you still need to know what your bottom line will be (your spendable income, your discretionary income after all bills for the period are paid). Use tools such as mint.com’s budget functionality to help track it.

Extra care was taken for those periodic bills that only came once a year or once a quarter. To make sure we had enough from those, we actually moved a bit of money each payday from checking to savings and made the savings account completely off limits until the bills we needed to pay were due. Although it was very depressing to move money to savings throughout the year and then have to pay it out on end of year bills (think life insurance, real estate taxes and Christmas gift buying), at least we had the money put aside and didn’t go into debt for it!

We made the money invisible or inaccessible.

Instead of keeping the money in a checking or savings account, we made it a bit harder to see and reach by purchasing certificate of deposits or buying savings bonds with it.

I used the savings bond trick for my youngest son as well. I was trying to match their job income and get them to open an IRA to start saving for their retirement – while they were still in college. My youngest got carried away, cashing out the IRA, paying the fees, penalties and taxes, in order to get at that money. From then on, I bought series I bonds in his name, never told him about them and kept them in our safety deposit box. He is now almost 35 and I finally gave them to him to manage this year! Hopefully he has held onto them.

We put our change  in a jar every night.

Every night after work, we would come home and empty almost all of our change in a jar. It adds up over time and is really hard to spend. All you do then is to roll it and take it to the bank and put it in your account.

We rewarded breaking bad habits or paying off a loan by saving the money we would have spent.

I smoked for many years. When I finally was able to give it up, I kept putting aside the cigarette money for several years and saved it. I got a nice psychological boost knowing that I was building wealth while improving my health!

We keep our cars for relatively long periods (10 + years). In our early years we took out loans to buy our cars. Once we paid off that loan, we continued to save the money we would have sent to the loan company. Eventually we were able to start paying cash for cars due to this habit.

We put off buying things.

We still do this trick. We’ve been contemplating putting in new doors and windows for several years now. Sometimes procrastination can be a good thing. Instead of running out and lining up a purchase and installer, we are looking at angles to use less expensive labor and install over time.

Last week our freezer’s ice maker stopped making ice (in the heat of summer of course). I love that automatic ice maker and use a lot of ice. Since the refrigerator/freezer that houses the ice maker is over 15 years old, hubby suggested looking at getting a new one. I countered with procrastination, suggesting instead that we get a bag of ice and some ice cube trays (believe it or not, you CAN still buy those) and eat down the food in the freezer. Then we can thaw the freezer and see if there is a way to fix that old ice maker. After all, the other parts of the unit are still in great shape and working fine.

Do you trick yourself into saving? How do you psyc yourself out to build wealth?