7 Reasons to Pay Your Student Loans Off Fast 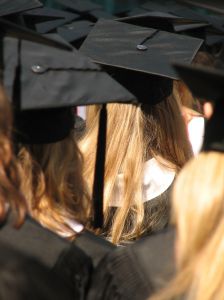 Do you have student loan debt? Since many of you have an incredibly low interest rate of 3.4%, I often get the question as to whether or not you should pay it back quickly, or just make the minimum payments until it’s gone in 10 years (the typical term of the loan). Most of the time, adults will advise you to just keep the loan and invest your extra money. After all, you could earn more than 3.4% in the market with your eyes closed. Don’t believe them boys and girls. While this could be true in some instances, many times it is a myth. Here are seven great reasons to pay your student loans off fast:

2) Investing Elsewhere Could Lose You Money

There are so many people that think they can earn so much money in the market, but I have news for you, the market isn’t all that good these days. Do the math: the Dow Jones is near it’s all-time high and our nation is continually facing government shut-downs because we have more debt as a nation than we will ever pay off. What are the odds that you will earn thousands of dollars in the long term by investing in the market? I say they are incredibly slim. Avoiding $3,620 of student loan interest payments suddenly sounds pretty good doesn’t it?

3) It’s Easier to Maintain Your Lifestyle than Lower it

Most students don’t want to stretch out those loan payments for the full 10 years, but they just aren’t certain that they want to start paying them off aggressively right now. Let me tell you, the best time is now. If you decide that you want to buy a nice car and a house before you start putting extra money toward your loans, you have pretty much guaranteed that you’ll be paying that $196 for the full term. If, however, you decide to start paying on them right away, it won’t feel that bad because you were used to living as a broke college student before anyway. If you just keep living the way you did those first four years, you could have that loan paid off in 12 months, not 120.

4) It’s Better For Your Future Relationship

If your future spouse has absolutely no loans whatsoever and you have $20,000, that difference will definitely come up in a future argument. No doubt about it. If you both start your new life together with no debt, life will be so much more blissful.

If you ever have a chance to talk with a panel of millionaires and ask them what one of the most important steps is to becoming wealthy, they will tell you to get yourself out of debt, hands down. The main reason is not necessarily to save money in interest (although that is part of it). It’s to free up your cash for future investments. If, instead of making $196 payments each month, you put that toward an investment that yields 10% compound interest, you’ll have $1.1 million dollars in 40 years. Simple as that. It’s definitely better to free up your money for those future investments – you never know when the next Bill Gates could be knocking on your door.

It is a well known fact that those that are aggressively paying down their loans are much more likely to pay their bills on time than those that are making the minimum payments. It just makes sense doesn’t it? When paying down your debt is a major focus, you’re going to remember to pay the bills before that due date arrives. And, by making this payment on time, your credit score will likely increase.

I remember when my high school Spanish teacher walked into the room with a big smile on her face. She announced to the class, “I just made the last payment on my student loans!” I remember my first reaction being, “You’re still making student loan payments? You’re like, 40 years old!” Thankfully, I was smart enough to internalize that thought instead of blurting it out, but it just goes to show you that emotion plays a huge role in debt repayment as well. We feel great when we no longer owe anyone that monthly payment that has been hounding us for so long. Pay off that loan and you won’t regret it.

Do you have student loans? Are you paying them off quickly?