When Being Cheap Can Cost You Big Time 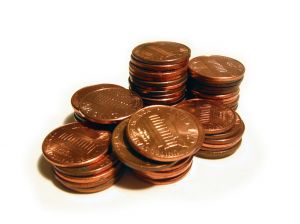 No, I did not skimp on Valentine’s Day and get thrown in the doghouse (I think I planned quite well for Valentine’s Day actually). This post is about my cheapness in another area: my house.

I bought my house proudly in August, 2011. Since it was a foreclosure there were a few issues that needed to be dealt with. The roof was sub-par, the floors needed to be redone, the wallpaper had to go, and there were absolutely no appliances in sight. I was tallying the expenses in my head and I knew that some of these fixes would just have to wait. Either that, or be band-aided for now and properly taken care of at a later date. 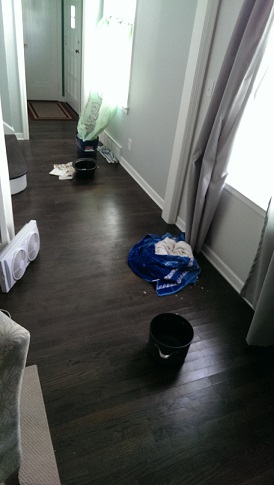 Since I knew the roof was important, this was one of my first phone calls. I got a local roofing company to come over and give me an estimate. I was expecting something high, but when they told me it would cost $4,800 to re-roof my house, I knew I just couldn’t afford it. Instead, I had them patch the bad areas so I could hopefully limp along with the existing roof for another 4 years or so.

Now, two and a half years later, this cheapskate moment is costing me big time. With this cold snowy winter, I have built up quite a lot of snow and ice on my house. Unfortunately for me, this has caused an ice dam along the edge of my roof, which is now forcing water underneath my aged shingling and into my house. Currently, I have about 4 buckets catching water and I am paying a guy $150 for about an hour’s worth of work to get the ice off my roof this morning. My ceiling is basically destroyed and my hardwood floor is warped. Now, not only do I REALLY need to fix the roof, but I have other expenses as well that all could have been avoided had I just sucked it up and made the appropriate repairs when they needed to be done.

Don’t Let Cheapness Get the Best of You

I have to admit that I pride myself on saving a buck here and there, but sometimes it is just plain idiocy. Don’t let idiocy get the best of you like I did. If your car is making an awful sound from the engine, take it to a mechanic and get it fixed properly. If your house needs repair, make them sooner rather than later. Yes, these fixes might blow your budget this month, but if you postpone them, that huge cost later might just leave you broke!