My Crappy Budgeting In January

This year I have set the goal for myself to pay off my house loan. Obviously, this started with a little bit of planning and budgeting for the year to come. In January, I planned to spend only $1,995, but somehow my actual spending was $3,707. YIKES! That’s terrible! This just goes to show you that I don’t always accomplish my goals. There are plenty of times that I have fallen flat on my face – an this was one of those times.

My Spending in January 2014 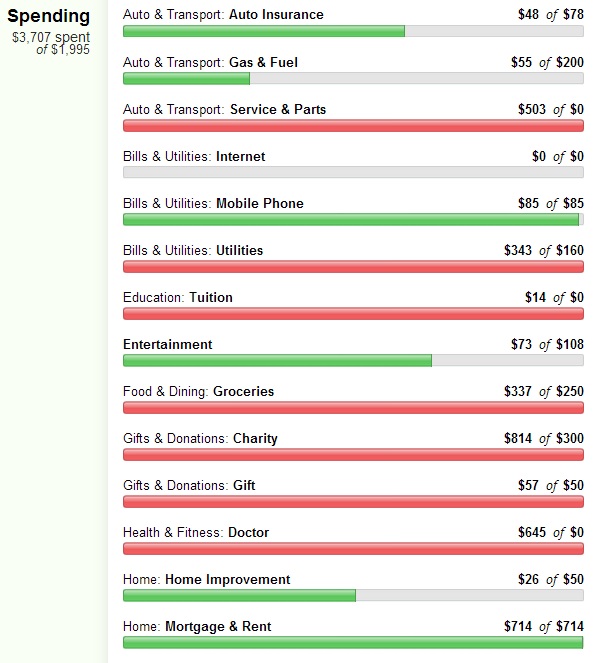 Let’s start with the bank-breakers:

I didn’t plan on anything going wrong with my car this month (of course, no one ever does), but there were actually two things. I needed to get my hood latch fixed, my timing belt replaced, and get a new water pump. This totaled over 500 bucks. Not too great when you’re planning on zero.

I has been extremely cold here so my gas bill was $160. Then, my water bill was sky-high because my toilet has been leaking. This probably cost me an extra $80 this month. I really need to get that thing fixed.

So you might think that I’m really generous, but this was actually not the case this month. Yes, some money went to church and charity, but the majority of this expense was due to an erroneous direct deposit to my account from the American Cancer Society. It’s a long story, but in short, I decided to call them up and let them know, and then paid their money back this month.

$337? Really? This was a shocker for me. It turns out that I am going out to eat more than I previously thought. I really need to crack down on my grocery spending (meaning, food spending in general) in February. It’s a short month, so I figure that I can spend less than $150. We’ll see how I do.

I forgot about a doctor bill that was still on it’s way from November. Sure enough, it showed up in January and required immediate payment. Blah… at least it’s over with.

Ok, now for the good stuff. What did I do well this month?

Booya! I only spent $55 on gas this past month! I was able to cash in some reward points mid-month, so I’ve been using my $100 gas card instead of my credit card. Plus, I am car pooling with a group of friends for my Grand Rapids classes, so that is saving me a ton of gas money too!

Everything else was pretty much in order this past month – I plan to do way better in the month of February! I can’t wait to tell you how awesome it was.

How to Become a Millionaire by 25 – by The College Investor

Why Americans Are Buried in Debt – by See Debt Run

5 Ways to Make Money Online – by Sweating the Big Stuff