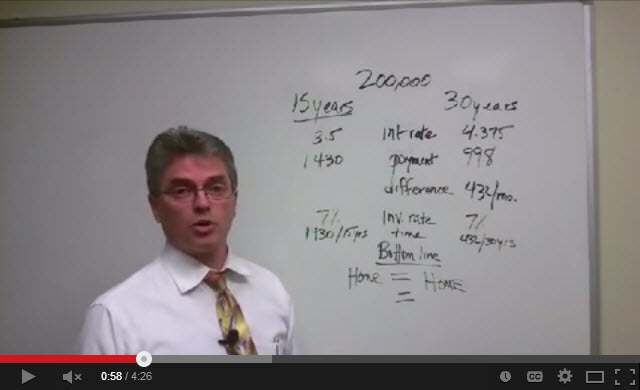 Have you ever been faced with the dilemma between buying a house with a 30-year mortgage or a 15-year mortgage? For many people, the 30 year mortgage is just a given and they don’t think twice about it. The payout per month is lower, so by going the 30 year route they can afford to buy a bigger house with their limited cash. This makes sense to most people since their goal is to buy the nicest house possible on their limited salaries.

But then there is the another (smaller) group of people that step back for a moment and realize that the interest rate on the 15 year loan is always less than the 30 year loan, so there are some obvious savings to be had by making slightly bigger payments with the 15 year loan.

As I stated earlier, the majority of the people just choose the 30 year mortgage because they can afford more house this way (or because it’s a lower payment each month), but there is one guy out there in YouTube land that has mathematical reasoning why you should extend your mortgage to 30 years. Here’s the video:

If you don’t feel like listening to this guy, here is the quick summary:

I know Dave Ramsey wouldn’t like what this guy is saying, but his math is actually pretty sound. If you invested the few hundred bucks over the course of 30 years and it earned an average of 7% (which isn’t that crazy of a number), then you would come out on top. But, there are a few flaws in his argument:

1) There is no guarantee in that 7%, but there is in the saved interest – When he makes his calculation, he figures that his money will grow at a 7% interest rate every year for 30 years. Well, I’m sorry to say, but the market is way more volatile than that. Some years it grows by 10%, and other years it might lose 20%. There is absolutely no guarantee that the stock market won’t crash twenty years from now. If it does, then you not only don’t own your house, but your investments aren’t worth nearly what you calculated them to be.

If you make your 15 year payments though, then it is an absolute guarantee that you will save money in interest. That math works every time.

2) He is only considering the math – When you have a big giant debt on your house, that often weighs you down heavily for much of your life. When you first purchase that house, you look at the numbers and suddenly realize that you owe more money on that one single asset than you have ever owed anyone at any point in your life. And, if something were to happen (like a job loss), there is no way that you would be able to pay the remaining balance back to the bank! Having payments every month for the majority of your life does something to a person, and it’s nothing good. A mortgage free life is a stress free life, and I’m not seeing that anywhere in this nerd’s calculation.

3) How many people would actually invest the difference? – I have heard so many people say that they are going to invest the extra savings from their 30 year loan. About 75% of them never even start investing and the other 25% piddle out with their investments when they find something else that they want to buy, which typically takes less than a year. They fully intend to start investing again in the future, but it very rarely happens. The only guy I think might actually be investing the difference is the one in the video. He has just enough nerd in him to follow through with that. For the majority though, this guy’s reasoning just gives them the excuse to take out a 30 year mortgage.

Well, considering that I am trying to pay off my entire mortgage in a year’s time, you can probably guess where I am going to land on this topic. I would absolutely choose the option of the 15-year loan over the 30-year loan because of the savings in interest and the severe increase in cash flow once it’s completely paid for. If you can, I would even encourage you to take out a 10-year loan on your house instead of the 15-year. This would not only force you to pay off your house faster, but it would also force you into a reasonably sized house instead of that mansion down the street that you don’t need.