Reinvest Your Profits to Grow Your Wealth Exponentially 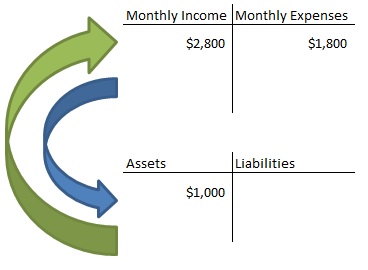 Have you ever purchased something that you hoped would increase your income? If you just read that sentence twice and have a blank stare on your face, then I suggest you keep reading. If you nodded in agreement, congratulations! I am so excited for you and hope that you can learn even more about wealth-building assets from this post.

For quite some time now, the average American citizen has learned how to spend absolutely everything that they earn each month, with very little (if anything) left over for savings or investments. In the example to the right, the family earns $2,800 a month in after-tax revenue. Their monthly expenses include their home mortgage, food, clothing, utilities, car payments, gas, insurance, and then a plethora of smaller items, which somehow end up totaling the same amount as the income line. It’s nearly magic how the expenses equal the monthly income… (insert sarcastic tone here).

Whether the family realizes it or not, they are spending every single dollar that they earn and are on a course to continue doing so for the rest of their lives. That is, of course, until they come to the realization that they are nearly 50 years old and have nothing saved for retirement.

It is very easy to spend all that you earn. At the end of the month, this family probably saw that they had an extra $100 in their account. Rather than put it away for a “rainy day” or invest it for their future, they decided to treat themselves to a meal at a nice restaurant. Poof! There goes that one hundred dollars.

The next month the husband decided that he needed a new rod and reel for fishing, which pretty easily ate up any additional money that might have had at the end of the month.

In the month following that, the wife went on a shopping trip with friends. Next, the kids needed supplies and clothes for school. Somehow, the expenses always seem to equal the income for the month and this family is never able to get ahead. Chances are though, that they never really knew how to get ahead anyway, otherwise they would have been disciplined enough to make it happen.

The Expectations of Businesses Yesterday, Today, and Always

If you are reading this article, you most likely have a job or have at least had one in the past, so you should easily know the answer to this question:

“What is the goal of any business?”

The question is pretty simple, and the answer should be fairly obvious. The goal of any business is to make money! Now, this may not be the driving force of all businesses, but if they never turn out a profit then the business will certainly not last for long.

I currently work for a large company that generates revenues of $2 billion each year. The company is publicly traded and many people own shares of stock. In order for the shareholders to earn a return on their investment, they would like to see the company grow larger and earn more, because it will in turn make their share of stock much more valuable.

So how do companies grow? How is it that they can continually earn more money year after year and keep their shareholders happy? To earn more money, they must invest their profits into more production space, more efficient machinery, or they might even use their built-up earnings to purchase another company that will then generate an even larger amount of profits in their next year.

As you can see in the diagram on the right, the company keeps their expenses lower than their earnings so that they can put their remaining profits into savings (which then builds their asset value). This past year, the company earned $2 billion in revenue, but only spent $1.6 billion, which means that they were able to put $400 million dollars into the bank.

So this is great and all, but you might still be scratching your head (as you should). Just because the company was able to save up $400 million does not mean that they are going to earn any additional money next year. But, what if they used that money to buy another company that earns a profit of $100 million a year? Well this new company is now an asset that is generating more wealth for the parent company. Instead of earning $2 billion dollars next year, they will be earning $2.1 billion.

As the profits are continually reinvested back into income producing assets, the company value just continues to grow exponentially.

This method obviously works, so why don’t we as individuals operate this way?

Reinvest Your Profits to Grow Your Wealth Exponentially

If they were wise, every family would operate with the same mentality as a large company. They would attempt to earn a large income, keep their expenses low, and then reinvest the profits into income-producing assets that would then earn them even more money in the next year.

Take a look at the example on the left. Just like in our very first example, the family earns $2,800 a month. But, because they wish to increase their wealth, they have cancelled their cable, stopped eating out at expensive restaurants, and have cut back in many other ways as well. Instead of spending $2,800 a month, they are now only paying out $1,800, which leaves them with an extra $1,000 a month in their bank account each month.

After the first year, they have saved up $12,000. While it was pretty tempting for them to go out and buy that boat they’ve always wanted (after all they have the cash, right? – (again, insert sarcasm here)), they decide to stick with the plan and invest their money into dividend yielding stocks that pay out 5% each year.

At the end of the second year, they are able to save $12,600 in cash and decide to buy into a business venture that earns them 10% per year. Now their assets have grown to $24,600 and their income has risen to $2,955 per month! Are you beginning to see where this is going?

By keeping their living expenses low at $1,800 a month, they are able to amass $13,860 in the third year. With this amount, their assets have grown to $38,460. In this year, they have stumbled upon an amazing real estate deal. For just $38,500 in cash, they could purchase a rental home that would earn them a profit of $500 a month! Immediately, they sell out of their business venture and stocks in order to buy their very own rental house. After a few DIY repairs, the house is worth $50,000 and is generating the expected $500 a month in rental income. Their monthly income has now risen from $2,955 a month to $3,300 a month! 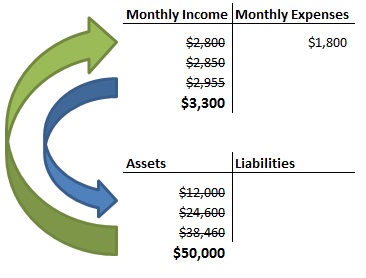 By sticking with this system for just another 10 years, they will amass nearly $1 million in assets, which will then be earning them over $10,000 a month. This is the power of reinvesting your profits. Not only will your income grow exponentially, so will your assets. And, rather than working for your money, your money will be working for you. This is the major key to wealth.

It really is just that simple.

Do you plan to reinvest your profits to grow your wealth exponentially?