You May Not Believe Me, But Debt is NOT a Financial Problem 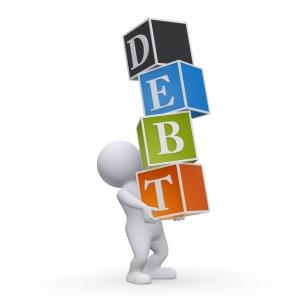 Almost every single American is earning an extremely large income each week. You may think I am joking, but I am dead serious. If your family earns more than $40,000 a year, you are officially one of the top income earners in the world. Sure, you definitely aren’t Bill Gates, but you are earning so much money that you can afford two cars, a home, electricity, indoor plumbing, and probably even air conditioning. What a luxurious life you have!

Mr. Money Mustache is an amazing blogger that recently opened my eyes to the many opportunities that Americans have today. With an income of over $40,000, you could easily spend much less than that each year, invest the difference, and become financially independent in your 30’s. Don’t believe me? Mr. Money Mustache proved this to be true when he quit his job at the age of 30. When I started digging into the details, I realized that if I lived frugally and saved aggressively, I could probably stop working at the age of 35. We are living during such an absolutely amazing time right now that, if we lived cheaply, we could earn all of the wealth we need in 10 years or less and could then fund the next 60 years of our lives!

However, during this amazing time of prosperity and wealth, many individuals are battling debt and just cannot seem to rid themselves of it. Their debt continues to grow, their interest payments rise, and one bad break could send them into bankruptcy. These people do not see the world as a prosperous place. They assume that their job is not paying enough or that taxes are too high, or whatever excuse they can come up with that explains their poor financial situation.

In reality though, these people do NOT have a financial problem. No, they simply have a behavior problem.

How the Debt Starts

While many people would like you to believe that their financial struggles began because of a costly hospital bill or because of a messy divorce, many of the debt blunders started long before these issues were factored into the equation.

In reality, many of us started experimenting with debt in college. We got our first credit card early in our freshman year and began using it fairly responsibly. At first, we only bought gas with it and we were sure to pay the balance off every month (you know, as responsible adults would do). But, then Spring Break arrived and we really wanted to go to Cancun with our buddies. The experience would no doubt be one of the most memorable of our lives, so we talked ourselves into paying for the trip with our credit card,

Other balances begin with shopping trips, brand new golf clubs, too many dinners out, an excessive amount of time at the bar, or maybe it was just a multitude of piddly expenses along the way. Whatever the case may be, debt often begins with the credit card.

As life continues, debt begins to pile on with student loans, car loans, a house loan, and maybe even a small boat loan. Almost everyone has some form of debt, but why?

The Typical Response to Debt

When you have a headache, what do you typically do? Well, you grab some medicine from the cupboard of course! However, does that really solve your problem or is it just masking it? Sure, the medicine will alleviate the pain right now, but how likely is it that that headache will return? Since you changed nothing internally, I would say that it’s pretty dang likely. If you wanted to get rid of those headaches for good, perhaps you would take a more serious look at your eating or exercise habits and make a dramatic life change. By tackling the problem at the source, your solution will be more long-lasting.

The same is true with debt. Many people realize that their debt is getting out of control, so they immediately cut out fast food and entertainment for a month. Sure, this saved them money in that month, but their debt load is still quite large and they are growing weary of their new, stress-filled lifestyle. Inevitably, they again make purchases that sink them deeper into debt.

Instead of just “reaching into the medicine cabinet” sort of speak, an indebted individual needs to tackle their financial woes at the source, which typically means checking themselves for materialism and altering their beliefs on life and money.

Debt is For the Greedy, Shallow, Short-term Thinkers

Financial advisers have a fantastic financial viewpoint of a wide variety of individuals in a local area. Almost every financial adviser can tell you a story of two people that earn about the same amount of money each year, but one of them has amassed millions of dollars more in their lives than the other. The issue obviously isn’t the financial advice they receive (since they both have the same adviser), but it’s their attitude toward life, their viewpoint on materialism. and their long-term outlook.

The typical difference between the wealthy and the debt-ridden broke folks:

When I was 20 years old, I had plans to grow rich through multilevel marketing, which would then allow me to buy a large house and lease a brand new Mercedes! If I did not continue to read and learn about true happiness in life, I might still want those things today (and would still be broke). Oddly enough, when my materialistic views changed and I no longer felt the need to own fancy cars and a large house, my wealth skyrocketed.

By learning more about life and what it has to offer, your beliefs will change about what truly makes you happy. Suddenly, you’ll realize that stuff is not important, but a beefed up savings account is. A shiny new car is only temporary, but a life-long friendship is priceless. A big house no longer impresses you, and that small one becomes your best ally in saving money for the future.

Instead of just downing some medicine, you have begun to solve your financial problems at the source. The odd thing is, now that money and stuff are no longer important to you, attaining them is now easier than ever.

Are your ready to change your financial beliefs and get out of debt for good?