Paying Off The Mortgage Update: July 2014 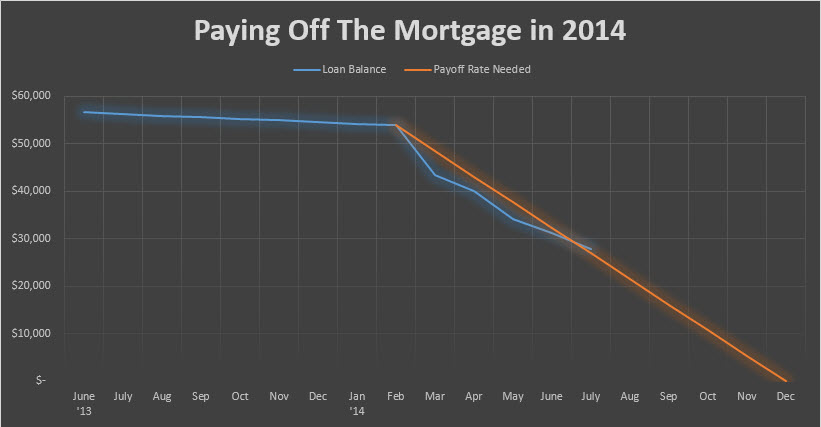 My goal starting in January (just 7 months ago) was to pay off my entire $54,500 mortgage by the end of the year. Yeah, it was a pretty lofty at the time, but I figured that if I pushed myself hard enough, I could accomplish this goal. Well…with a website downgrade from the Big G, the money hasn’t been flowing in quite like it used to, but you know I’m not going to let that stop me! The mountain has seemingly grown a little taller (which really sucks because I was already halfway up…), but I am still continuing my climb. This is a summary of my progress thus far:

Through June, I had paid off over 56% of my total mortgage (which was $70,875 back in August, 2011). That means I’m over halfway done! However, this also means that I still have 44% to go before I have the house completely paid off. This climb only seems to get steeper and more painful as time goes on, but I am pretty crafty and continue to come up with new ways to put money toward this debt. As crazy as it sounds, I think I still have a chance to pay off this balance by the end of the year!

Let’s see how well I did in the month of July.

The Mortgage Payment in July

If you recall from my mortgage payoff post in June, I needed to come up with $4,317 in July to keep pace with my proposed mortgage payoff plan. First of all, that is a crap ton of money! Secondly, I discovered that my property taxes were coming due in July as well, which meant that I actually had to earn around $6,117 to keep up with the pace needed to accomplish my goal. Well goosh, this number almost had me quitting before the month even started.

If you know me at all though, you know that quitting isn’t often an option. When I realized that my taxes didn’t have to be paid until August 15th, I started to feel as though my July goal was possible. I started looking for ways to earn that $4,317.

I first started to look for things to sell around the house. As it turns out, I really don’t have that much stuff laying around, which made this pretty difficult. However, I was still able to sell a bolt of fabric, a vacuum, and a towel hook for a total of $50. The sale of these items was obviously not all that helpful, but $50 is still $50, and it’s more than I had before I sold them.

After realizing that I didn’t have thousands of dollars of items to sell, I started thinking about this whole car flipping idea again. If I could find an undervalued car, buy it for cheap, then clean it up and sell it for a thousand bucks more, I could get pretty close to this July goal.

I first found a Jeep Wrangler that was for sale for just $6,000 (which I probably could have bought for $5,200 in cash), but I quickly  talked myself out of it because of the high miles. It would have just been too difficult to sell. My second possibility was a 1997 Honda Civic. The selling price was $2,000, which was a little high for a car flip, so I offered $1,400 in cash on the spot. I thought we were going to make a deal on this ride, but ultimately he decided to keep it rather than sell it for such a small amount. So, in the month of July, I unfortunately was not able to find a car to flip, but I will keep looking because I think I will most definitely need the extra cash in August.

While I wasn’t able to make all that much extra money (with my site earnings or the car flip), I was able to keep my spending at bay and scrounged  up $3,415.42. Not too shabby. This brings my mortgage down to approximately $27,936. We’re getting there, but unfortunately, we’re falling behind on the goal pace.

Alright, so I am barely losing when compared to the orange pace line shown above, but August is going to hurt pretty bad. In the next few days, I will pay my $1,850 property tax bill, which will obviously hurt my August payment by quite a lot.

My goal for August is to pay down my mortgage by $1,436, which will bring down my total to $26,500. This definitely won’t help me keep up with the orange line, but at this point the $1,436 is a stretch goal and I will really have to push just to meet that.

Whew! This year has been tough and looks to be getting tougher! Any advice? Praise? Questions?

Get Out of Debt Housing Mortgage Payoff