Paying Off The Mortgage: Failure or Success in October? 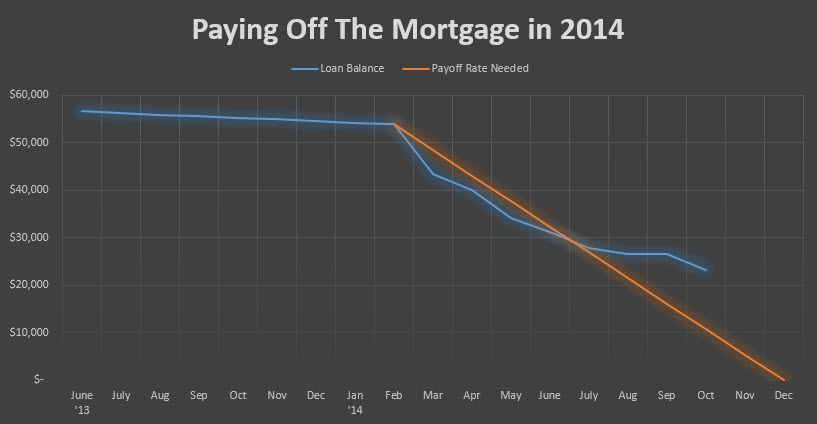 Unfortunately, another month has ended, which means that I have less than 60 days to pay off my home mortgage! AHHHHH! I don’t feel quite ready for this yet, but as we always do, let’s review how much I paid off in October and make a plan for a full payoff by the end of this 2014 year.

Paying Off The Mortgage: The Journey Thus Far

I made the audacious goal back in December 2013 that I was going to pay off my $54,500 mortgage in one single year. In the beginning I was fortunate enough to get a huge tax refund as well a few tuition reimbursements from my company. All was going swimmingly until May – this is when Google decided that I needed to be penalized and my monthly web earnings dropped by about 80%. This did not fair well for my mortgage payoff plans.

If you know me at all though, you know that I don’t give up very easily. So, instead of sulking at my misfortune I decided to write a crap ton of articles for other sites to make up the income difference. By writing often, I was still able to earn about a thousand extra bucks a month during that four month stretch of penalization. Things are now back to normal, but there is still quite a large pay off to be had! Here is a quick summary of my progress by the month:

Not too shabby huh? Well, this is all distant history. Let’s dig into how well I did this past month!

The Story in October

Before I decided to buy that truck to flip (which I still own by the way), I planned on paying the mortgage down by these amounts each month:

At this moment, I owe $23,334 to the bank before I can call my house 100% mine. Here is what my payoff has looked like so far (vs. the orange payment line I was hoping to hold myself to):

I obviously haven’t stuck to that orange line too well in the recent months, but I still feel pretty good about paying off the mortgage. I now own a truck that’s worth about $6,000 and I still have $15,000 in the bank (which is technically my emergency safety net, but I could use most of it for the payoff at the end of the year). If I can put $2,800 toward my mortgage in November and December and sell the truck without any further expense, I foresee the chart looking like this before the end of this year. 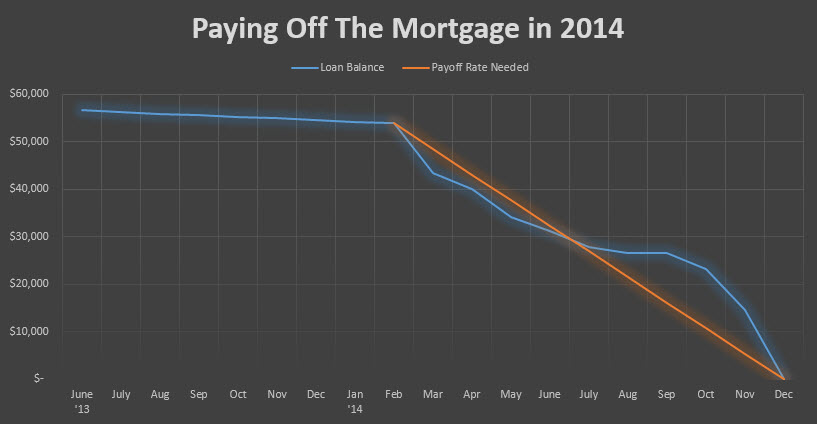 By selling the truck for $6,000 and by using a large portion of my savings, I could have my mortgage down to zero by the end of December! And, I would still have about $3,000 left in the bank. If all happens according to plan, then I am going to go on a wicked nice vacation (still undecided on where at this point – definitely some place tropical though)! After the vacation I will start to save up so I can invest in real estate (and then of course write all about it). It will definitely be an adventure!

Whew! I think I’m still on track to pay off this mortgage! What do you think?