Flipping My First House – 5 Weeks In 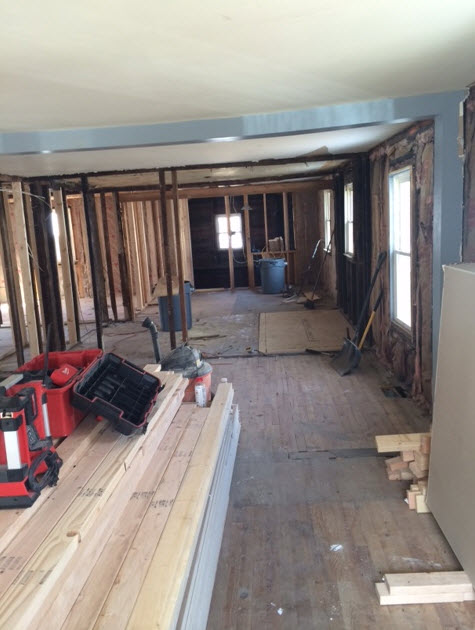 The First Week of the House Flip

On Day 1 we had a ton of demo to do. The crew consisted of 8 people, so there was no time to waste since I was paying them by the hour, and this home needed to be completely stripped down to the studs. Yours truly was in charge of removing the kitchen counters and cabinets with a sledgehammer, and I have to say I got quite the workout! After removing doors, cabinets, carpeting, and a whole lot of other junk from the house, the first issue came up.

As one of the crew members started taking down the drywall in one of the bedrooms we realized there was no insulation in the wall. This was actually a big shock to me because the home had newer siding, newer windows, and plenty of new blown insulation in the attic. In 95% of the homes I have seen, if someone takes the time to spend money on those things they also put insulation in their walls! But not all was lost – it turns out that half of the living room did have insulation (Why half?!). So while this did end up costing me $375 more in material it could have been a lot worse.

In the following weeks we ran into a few other issues. First of all, removing the existing flooring layers in the kitchen and bathroom were pretty much a nightmare. There were four layers of vinyl flooring, 1 layer of 1/4 inch plywood, and 1 layer of 3/4 OSB all glued together before we could get to the hardwood floors below. This took us about three times longer than usual because typically layers are removed as floors are replaced – not so in this house. 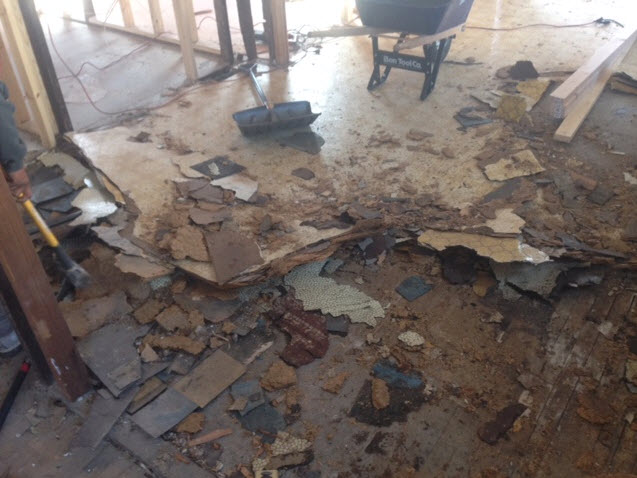 Next we had one of our flooring guys leave us high and dry halfway through a job. Luckily, we only lost about $75 on this, but it did take a couple days to find a replacement. And, the new flooring guy found a few additional areas in the sub-floor that needed to be replaced, so that cost us another $200. Finally, we had to scrap our initial kitchen layout and spend hours coming up with a new one that worked for the space.

Just when I thought things were starting to run smoothly, the polar vortex came as we were set to replace the roof. I was originally supposed to purchase the house in the late fall but as the closing delays mounted we knew were going to be working in the cold. This wouldn’t have been too big of an issue if the temperature was in the high 20’s, but for a couple weeks the readings were closer to zero. It was so cold that the nail guns were freezing up! So, we decided we were going to delay working on the roof. Along with the roofing delay we ran into another delay on getting our building permit. The contractor who was going to pull it for us went on vacation for a week without telling anyone. Needless to say he is no longer working for me, but that did cause a setback of about 7 days.

Bright Spots of the House Flip

Now while there were plenty of problems, we also ran into some good luck along the way. It turned out that the water heater we were planning to replace actually worked fine, so that was $500 back in my pocket. I also came across some antiques while cleaning out the garage that are worth about $150. Unfortunately instead of being able to make a profit on these beauties, my wife fell in love and kept them (can’t win them all).

Finally, a couple days ago we had someone come by who could be interested in purchasing the home. It turns out that she actually lived there years ago when it was a rental and wanted to see how it was going. When we told her our asking price, she said she was very interested and wanted us to contact her when we were close to finished. While she may not end up buying the house, this was a sign to me that we have a competitive asking price.

Flipping my first house has been an adventure so far. I believe we are still on pace to finish on time and on budget. Even though I have run into some extra costs, I had $1,500 built in the budget for that very reason. In these first few weeks, I have learned quite a lot about the differences between doing a flip and doing a rental. I have met many good hard working people and also met a couple who were not, but I am really enjoying the experience. I wanted to let everyone know what I am dealing with so you can decide if this might be something you would like to do someday. So far this project has had a lot of ups and downs but I am confident that I will come out on top.

What do you think about flipping houses? Have you ever thought about it?