How I Increased My Blog Traffic by 79% in 12 Weeks 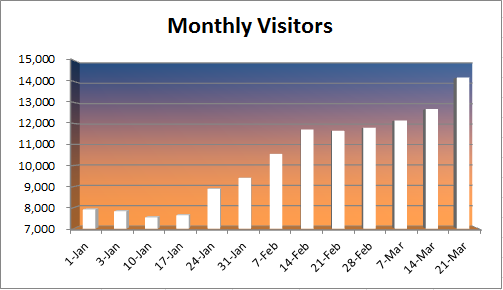 Bloggers are always looking for the next secret to build their online community faster, stronger, and with less effort than before. They eyeball companies that promise to build their Twitter followers to record numbers, that can improve their quantity of inbound links, and some of them even attempt to build their content by manipulating a few words of someone else’s article and then calling it their own. Each one of these methods might work temporarily, but ultimately you’ll be found out and your blog will tumble along with all the others.

In late December of last year, I decided to push myself to become a better blogger and to reach more people with my personal finance message. Here are the goals I set for myself to reach by the end of 2015:

I really didn’t have a marvelous plan on how I was going to achieve these numbers, but I knew that it had to start with better writing.

In early 2013, building traffic was sooo easy. I just wrote quite a few 400-500 word posts that had a decent central topic and boom, my articles got picked up by Google and drove some pretty decent traffic to my site. But then…Google updated their algorithm and my search traffic tanked. Within just a few months, my visitor numbers dropped to a small fraction of where they had been before.

Needless to say, my confidence probably dropped more steeply than did my visitor numbers, and while I still wrote articles consistently, I didn’t push myself to write those high-quality, rich content posts that I should have been. I told no one that I owned a blog, and pretty much wrote from the dark corners of my home, wallowing in my self-pity because my site was no longer growing.

Then, I had a sort of epiphany. My site had a ton of content, there were still people that loved to read what I wrote, and with my mortgage paid off, I now felt completely qualified to give solid financial advice to those that were searching for it! In December I decided that 2015 was going to be my year! With this new mindset, guess what happened? My site exploded!

At first, no one really noticed that anything had changed, but then each article started getting a few more hits than the one before. I added new staff writers based not on a first come first serve basis, but by way of interviews and sample posts. No longer was this blog a way to make a few bucks, it was a platform to reach others and inspire them to find their own financial greatness!

Soon, my articles and my staff writers were getting picked up by larger blogs, and the visitor numbers just kept on growing. As of Saturday, I have increased my blog traffic from 7,915 visitors at the beginning of the year to 14,179 – a 79% growth in just 12 weeks.

Related: How to Create Your Own Blog and Earn Money in 2022

2) Harnessing the Power of Social Media

Prior to this year, I had pretty much ignored social media. Sure, I had a Twitter and Facebook account, but I only posted links to my most recent articles. That was it. And this was supposed to inspire someone to look at my posts? Ummm, yeah, that was probably a bad marketing move on my part. No, let me clarify that a little better – it was IDIOTIC on my part.

In 2015, I made every effort I could to improve my social media numbers, specifically with Twitter: 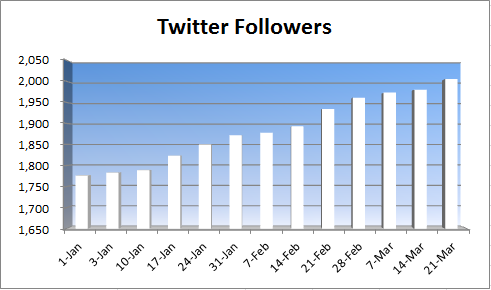 This added effort is really starting to pay off. Not only have I improved my Twitter numbers to over 2,000 followers, but each article I write now has well over 30 tweets, sometimes greater than 50! All these tweets are sending new eyeballs to my site each and every day.

3) I Set Up a Free eBook for Email Subscribers

I had written a book about two years ago, but just never set it up as a promotional item on my website. It was laziness at its best, but I just couldn’t let it go on any longer. By setting up this book as an incentive for my readers to subscribe, I was not only improving my subscriber numbers, but I was also improving my visitor numbers in two ways:

Number two obviously isn’t as likely as number one, but it is certainly possible and might create another loyal subscriber, which could then lead yet another person to my site! With my subscriber numbers now soaring, my visitor numbers will likely only climb higher. 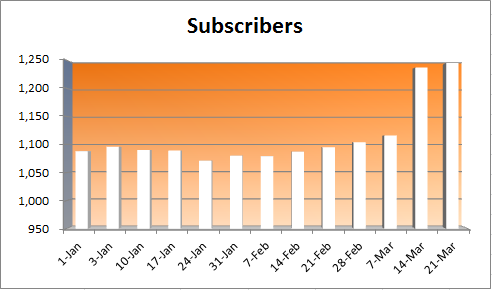 All this growth never would have happened if my content had not improved. I hear it said again and again, but it is 100% true. Without superior content, your blog will not grow. I could have increased my Twitter activity, featured a decent eBook, or even hosted giveaway, which may have initially improved my numbers. But, in the end the content still would have been average and uninspiring, and the numbers would have sunk back down to their normal lows. Growth absolutely begins and ends with quality content. There is no way around it. Because I now focus on writing at least four quality articles a week, my numbers have spiked like I would never have believed. Stay tuned – there is more awesomeness to come!