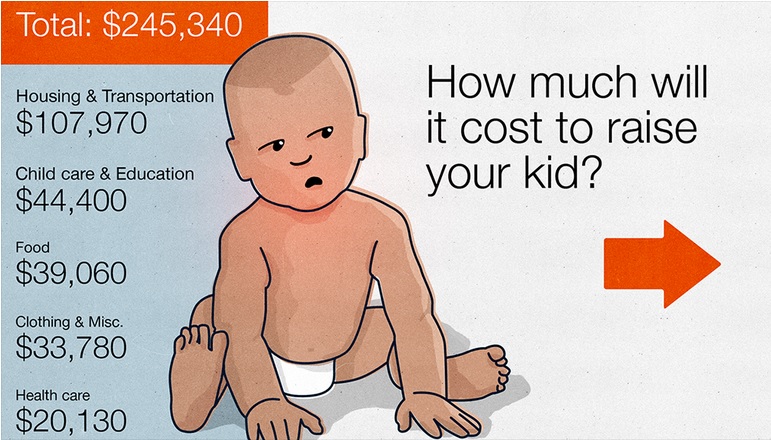 If you Google, “How much does it cost to raise a kid?”, you’ll get estimates ranging from $245,000 all the way up to $455,000 for the high cost-of-living areas. In this world of selfishness and greed where people are already turned off from having children (because it would force them to think about and care for someone other than themselves), numbers like these will only solidify their decision to stay selfish and never have children! What if though, these numbers were wrong? What if it actually cost far less to raise a child?

Say Anything Long Enough and You’ll Consider It Truth

It’s been scientifically proven. Someone rattles off what seems to be an unbelievable statement and it just sounds crazy, so we dismiss it. Then we hear the same message again and again, and with each occurrence we believe the statement a little bit more until finally we just consider it to be truth! This is what I believe happened with this crazy figure for the cost to raise a kid. The U.S. Department of Agriculture makes this claim each year, typically raising the estimated amount by 2-4% annually, causing the number to climb again and again. We have all heard it – “Sure, of course it costs over $250,000 to raise a child. Everyone knows that.” Again, I think this is total crap, and here’s why.

The Cost to Raise a Kid: The Assumptions

With these government reports, there are always assumptions built into the report so that they can provide a nice clear cut number to the public. But, as you certainly know, each one of our families are different. We earn different amounts, we spend differently, and it will therefore cost a different amount for each of us to raise our own children. Here are the major assumptions of the study:

These assumptions lead into the total costs shown below:

So many people just assume that these numbers are the truth. After all, they come from the government, so they must be true (note the sarcasm)! I’m sorry, but I’m just not that gullible. It’s time to dig into these ridiculous assumptions. 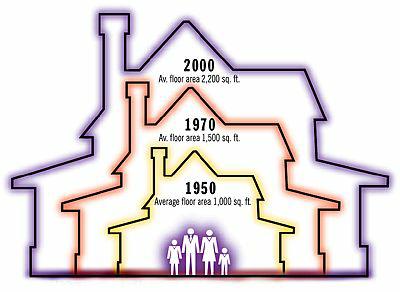 The government assumes that once we have a child, we’ll have to live in a much larger home. I currently live in a 1,600 square foot home with 3 bedrooms and 2 baths. If I get married and have a child, I really don’t need any extra space. In fact, even if my future wife and I would have two children, we would still have a bedroom for ourselves and one for each of the kids. We wouldn’t need to expand our living space at all! Therefore, no additional costs would be incurred.

Back in the 1950’s, do you know what the average home size was? 1,000 square feet. By the year 1970 the average new home had grown to 1,500 square feet. And then by the year 2000, the new norm was 2,200 square feet. Today, the average has grown even larger, to 2,600 square feet! Do we really need this much space? Do we truly have to factor in nearly $4,000 a year so that we can increase the size of our home for one child? For many of us, likely not. Our current residence is probably plenty large just the way it is.

Cost of Child Care and Transportation

Kids are expensive from the get-go, mainly because of childcare (well, and maybe diapers, but we’ll talk about that later). On average, childcare can cost $11,666 per year and then don’t forget about the extra $1,800 a year that it costs to cart them to and from daycare! At first glance, these expenses seem pretty cut and dry. After all, those are the reported averages for childcare and obviously it costs additional gas money to get them there as well, right? Well, I’m not ready to raise the white flag on this one yet.

Liz and I have talked about having kids in the future. We definitely want a couple of cute little hurricanes around our house, but don’t want to pay thousands of dollars a month for someone else to take care of them while we work. It was time for us to think outside of the box a little.

For many, having a child either means the loss of an income (if one of the spouses chooses to stay home to raise him/her) or an additional cost due to childcare. Are these truly the only options though? I personally don’t think so. Liz and I have come up with the following options that would allow us to have children, but also would free one of us up to care for them while still earning an income:

Each one of these ideas would reduce the need for daycare, and also wouldn’t affect the overall income stream by much. By thinking outside of the box, Liz and I could not only eliminate that daycare expense, but we could also eliminate much of the additional travel as well. With the right business idea, the actual costs here would likely only run us $1,000 per year – most of which would be for gas for those extra unforeseen trips and for visits to grandpa and grandma.

The Cost of Food

I can already hear the retaliation…”But you don’t understand Derek, baby food is expensive!” I honestly have  no idea how much baby food costs, but I do know that my friends make their own baby food for about 25% of the in-store costs, so if you would just spend a few extra minutes in the kitchen, I’m sure you could save some serious money here. Realistically, you could easily cut these costs down to $100 a month, or $1,200 a year.

Related Article: How to Feed a Family of Four for $400 a Month

The cost of clothing can definitely eat away at your savings account if you’re not careful. Kids grow like weeds from the age of zero to 18 years old, so you’ll continually be buying them new shoes, shirts, and pants. According to the study though, you’ll be spending $156 a month on clothes and toys (and diapers probably land here as well). If you are shopping at Target and Carters, sure, I bet you could rack up over a hundred dollars in clothes and toys pretty fast, but why would you want to do that? Haven’t you studied economics in school? If you spend less money on the necessary items, then you will have a greater discretionary income for buying something that you want or putting money into savings.

Instead of shopping at the retail stores for clothing and toys, why not check out local garage sales or ask your circle of friends for some spare onesies that their kids have outgrown? Your baby will only wear a particular outfit 3 or 4 times, so wouldn’t it be smart to seek out an outfit for $1 instead of $10? I guarantee that your kids really don’t care what they’re wearing as long as they’re warm and getting plenty of hugs from you. And, they really don’t need that mountain of toys that’s taking over your living room either. They could really get buy with 10 toys or less. Oh, and if you love to buy them books, then head to your local thrift store where you can buy stacks of books for just a few dollars. That $156 a month could easily be whittled down to $50 a month.

The True Cost of a Child

So let’s sum it all up! How much do I believe it would really cost to raise a kid?

Alright, so here’s my new chart for the cost to raise a kid! 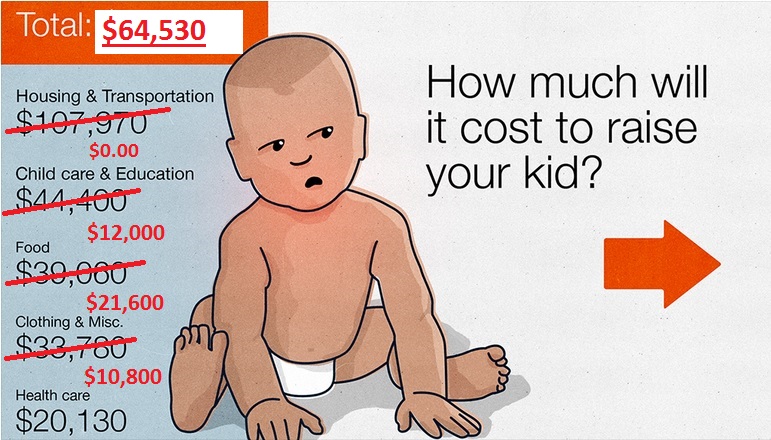 BOOM, $64,530. That’s not too shabby compared to $250,000. All you have to do is think a little smarter before your purchases and you could save nearly $200,000 compared to those families that continually upgrade with each kid!

What do you think about the total cost of $64,530? Do you agree? Disagree? Let me know in the comments below!