What If I Spent My Money Like 90% of Americans? 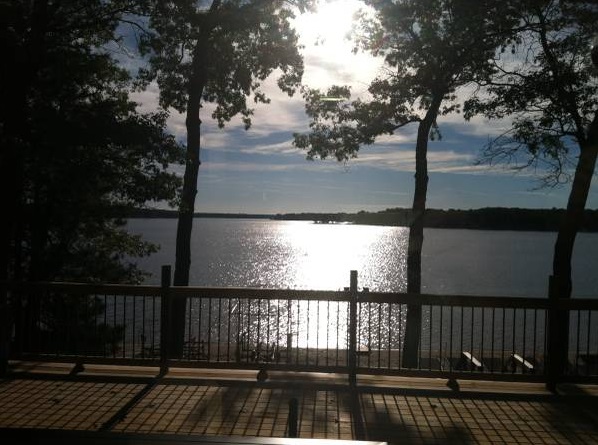 Did you know that the median American savings is $0.00 each year? Since pensions are now nearly extinct and Social Security is teetering on the brink of failure, you’d think that Americans would  be saving much more now than in the past. In reality, however, many are saving far less.

Take a look at the chart below. The bottom 90% of earners in America typically save less than 5% of their income each year. And, as of the year 2000, they are saving even less than that (even into the negatives at times)! Some people reason that the low savings rate is natural because the bottom 90% are earning less to begin with. I agree with this to an extent, but is a 3% savings rate really the best a family can do that’s earning more than $50,000 per year? After all, that would mean that they’re only saving about $125 a month. This minimal savings amount will not fend off Murphy very well, nor will it make for a fun retirement. Americans should be (and I believe could be) saving much, much more. 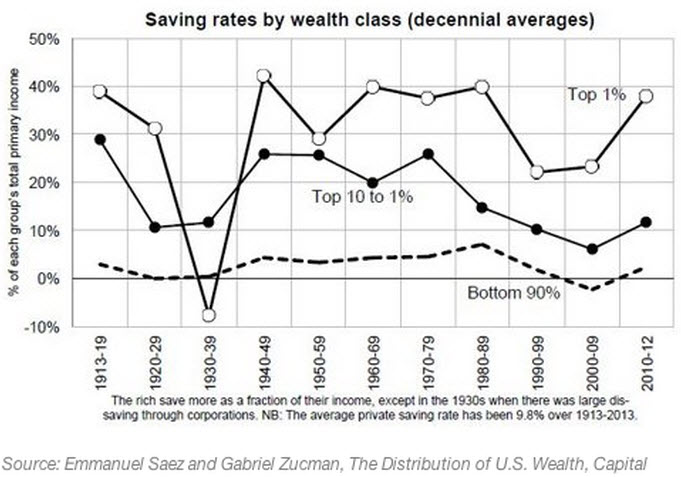 What If I Spent My Money Like 90% of Americans?

The vast majority of Americans are spending almost everything they earn each year. From the outside looking in, it may not always look like irresponsible spending, but for many, living this light on cash is an absolute choice. These people are not tight on cash because they’re victims of a downturn, and they aren’t in dire straights because they have all those little mouths to feed (as they often say). The excuses are many, but the true reason for a low savings is almost always the same: it’s due to their irresponsibility and their many poor choices.

On December 11th, 2014, I cleared my name of all debts including my home mortgage. Without any payments whatsoever, my discretionary income has skyrocketed, which then got me wondering, “What if I spent my money like 90% of Americans?” In other words, what if I only saved about $125 a month and paid for the rest of my possessions with credit?

Since I live on practically nothing, I have about $2,500 that is earmarked for nothing each month. What could I be enjoying if I loaded up my credit? Let’s have some fun and find out!

1) Cottage on the Lake

My first item that I would buy on credit would be this gorgeous 1,800 square foot cottage on Big Star Lake. It has a newly renovated kitchen and 84 feet of lake frontage. How would you like to wake up to that lake view every day?! Looks pretty awesome to me. The price tag is about $325,000, so over 30 years at 3.93% interest I would owe $1,538 a month. 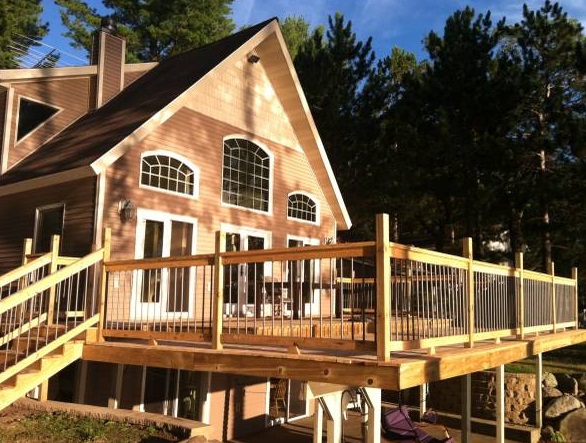 This Mercedes would be my next purchase. Believe it or not, I found it used on Craigslist for $13,000, so it’s a decent purchase, but it would come with more payments. A five year loan would have me paying $219 a month. Not too shabby considering what some people pay!

This boat certainly isn’t brand new, but it’s 33 feet long and has a ton of space with the multiple decks. The price tag on this is also $13,000. but I’ve discovered that interest on boats is a bit higher than on cars or houses, probably because there is more risk of default. After all, if given the option of paying your mortgage or your boat payment, which would you choose? I’m pretty sure 99.9% of the population would make the mortgage payment. So, with the interest charge of 7.99% and a term of five years, my payments come to $263 a month. 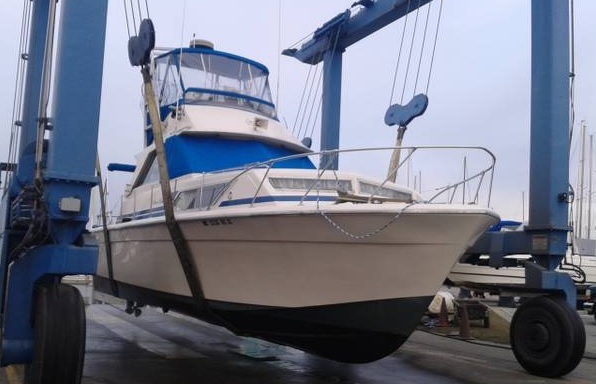 4) Jamaican Vacation with My Wife

Finally, with the money I have left each month I would take my wife on a gorgeous Jamaican vacation! I found this amazing deal on CheapCaribbean.com – it’s an all inclusive four night stay and only costs $849 per person. Since I don’t have the cash (hypothetically), I would just put it on my credit card and make payments of $150 a month. 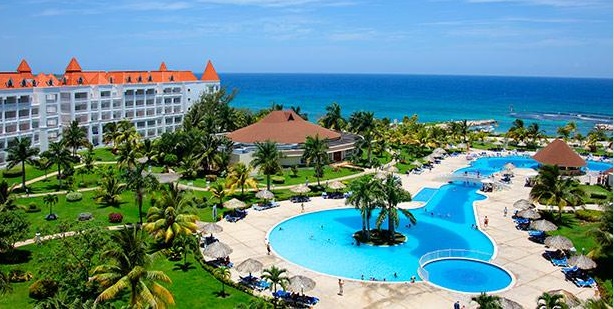 What Would This Mean For Me?

Let’s sum this up here. In the beginning, I had an extra $2,500 a month that I could have used for anything. If I decided to purchase all the items above, here’s what my monthly spending would look like:

I had $2,500 a month to spend and with those four big ticket items above, I still only came to $2,170 a month. But, with insurance, taxes, and maintenance on those purchases, I’m pretty sure my full $2,500 would nearly get used up every month.

Alright, so now I own my house, a cottage, a Mercedes, a pretty large boat, and I took a pretty awesome vacation. To almost every human being on this planet, I would be living the good life (and to be completely honest, it would be pretty sweet to own all of these things right now). But would this really be true? If I spent my money like the other 90% of America, life in the present would be amazing, but what about life in the future?

By purchasing that cottage on a 30 year note, I am signing myself up to work my full-time job until I am at least 60 years old! I don’t particularly dislike my job, but I would like to have the option to do something else at some point – maybe purchase some rental properties or become a speaker to college kids about their future lives – whatever it may be, I want to have the option to do it.

Then, the next 10 years (beyond paying off the cottage) would involve me scrimping and saving so that I could scrape together a retirement before I died! I don’t know about you, but this is not the career path that I had in mind for myself.

2) An Increased Amount of Worry

The more you own, the more there is to worry about. By owning multiple houses, I would have to think about keeping the inside clean, the outside maintained, and I’d have to worry about protecting them while I was gone. Then there’s the fancy car and the boat in the slip. I’d have to keep a constant watch on both of these items to protect them from wealth-hating hooligans. At this point, I think I would almost rather have less to get rid of all worry.

3) A Stagnant Net Worth

When you buy stuff on credit, it will almost never increase your overall net worth. The Mercedes and the boat will be worth hardly anything in 10 years, and I’ll be out almost $30,000 when factoring in the purchase price with the interest payments. The cottage will likely be worth more, but after 30 years of interest I will have paid the bank $554,000 for it, so there probably isn’t a huge gain there. And, the vacations will just be a distant memory and will obviously be worth absolutely nothing. After 40 more years of hard work, I’ll have very little to show for it.

But What If I Choose to Save and Invest??

What if, instead of spending all of my future money (which is what you are doing when you buy on credit), I learn to live simply in the present and save for the future? What would be in store for me?

I could honestly go many routes here. I could invest my money into real estate, I could put some of it in the stock market, and I may even invest another portion into my own business venture on the side. What if, on average, I can earn 10% per year on my $2,500 of extra money each month? How much would I have in 10 years? 20 years? 30 years? 40 years?

After 10 Years of Investing…

If I invested my $2,500 every month for 10 years, I would have $526,000 to my name after that 10th year. Does that number sound familiar? That was pretty close to my entire net worth after 40 years when I bought the cottage, car, boat, and vacations! By forgoing those things, I was able to acquire the same amount of value in just 10 years!

At this point, I would be comfortable looking around at other jobs that might interest me a little more, or maybe I would just start working for myself on something that I enjoyed. Already after just 10 years, this option is starting to look better than the previous 40 year plan of consumerism. 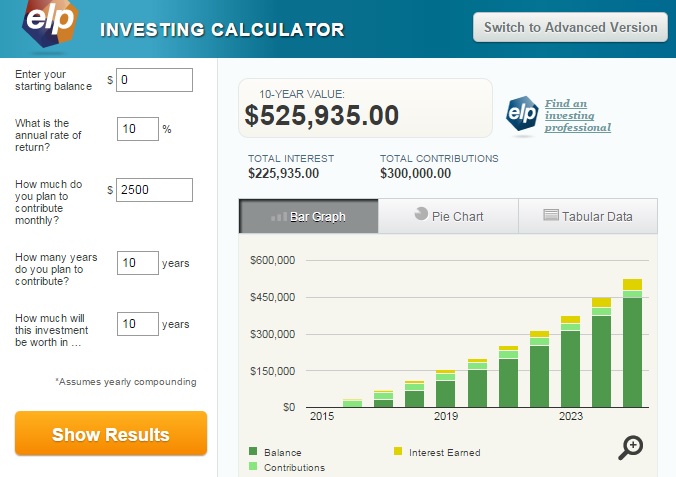 After 20 Years of Investing…

If I were to invest my $2,500 for 20 years, I would accumulate $1.9 million. At this point, at the ripe old age of 50, I could seriously start thinking about retiring. 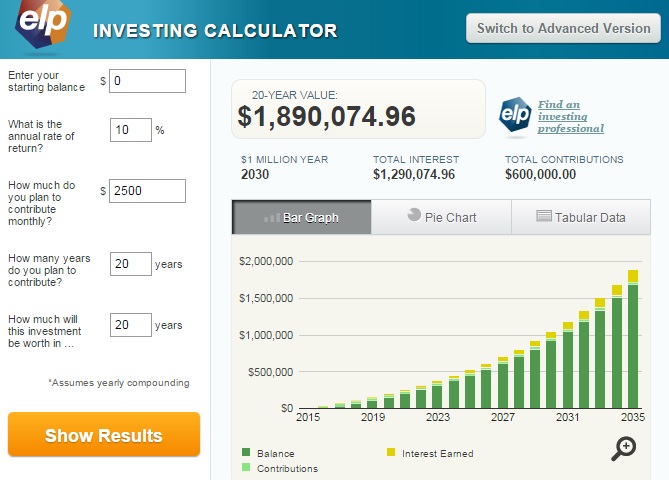 After 30 Years of Investing…

If I kept working and investing into the 30th year, my net worth would grow to $5.4 million! 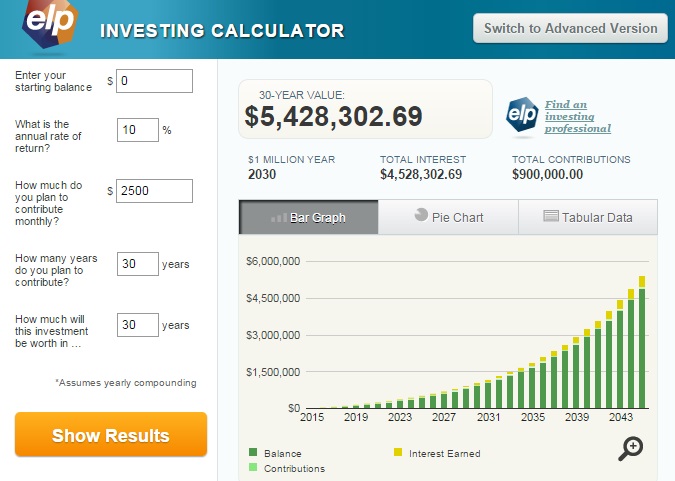 After 40 Years of Investing…

And, just for kicks, if I really still wanted to keep working and investing into my 40th year, I would attain a net worth of $14.6 million. Umm…pretty sure this beats the “buy everything right now strategy” and coming out of that with far less than a million. 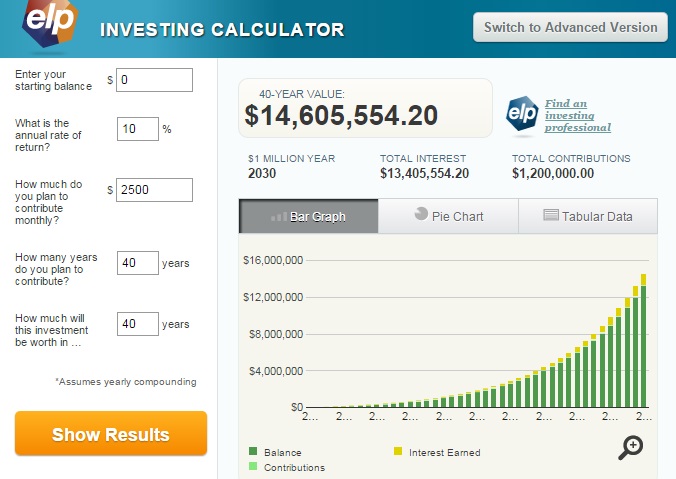 While even I was enticed with the idea of owning a cottage on the lake, driving a Mercedes, tooling around on my boat, and traveling to Jamaica each year, it is clearly not worth the opportunity cost of investing. Now, I don’t need to have $14 million, but I would like to have options in life. If I decided that my job just wasn’t for me 10 years down the road, I would like to be in a financial position to leave that job and try something totally different that would make me happy. Wouldn’t you want this for yourself as well?

If you would like the gift of time and options, then I suggest that you ignore the fancy high-class lifestyle around us at the moment. Instead of taking on massive amounts of debt today, do everything you can to increase your income and decrease your expenses so that you can buy those items in the near future with cash. Not only is it more financially wise, but it will turn you into a better person as well.

What about you? Are you living like 90% of Americans? Or will you choose to live differently?

Related Post: Ditching Your Debt Could Lead to an Extremely Early Retirement

Get Out of Debt Investing Money Retirement Save Money