How Does the Average Person Spend Money? 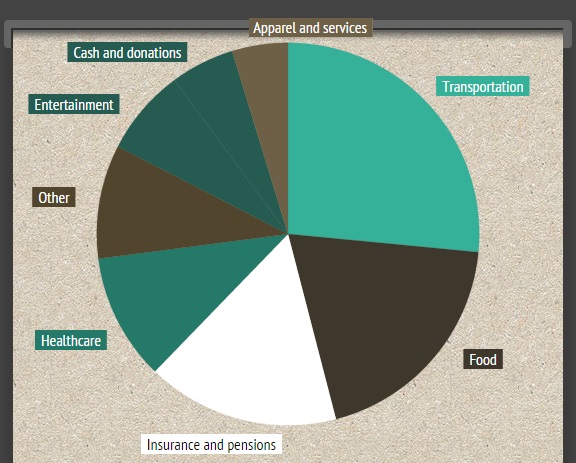 Since very few of us actually dig into the details of how we spend money with those around us, it’s hard to know how we stack up. Is there something we do really well? Is there an area to improve?

Bringing Home the Bacon (And Spending It)

The average family brought home $63,784 in income before taxes. Out of that total, the average American family spent $51,100. In other words, they spend pretty much everything they earn.

how the average person spends their money | Create infographics

Out of that total spending of $51,100, the spending breaks down to:

Over the last year, Americans spend more on healthcare, mostly due to insurance costs. Health care costs have risen every year since 1996. We spent less on cash contributions however, which include support for college students, child support, and giving to charitable organizations.

How Do The Rich Spend Money Compared to the Poor?

If that’s how the average American spend their money, what about the rich and the poor? According to the Bureau of Labor and Statistics, those with lower incomes spend a larger portion of their income on housing and food, while those with higher incomes put more away in pensions and other savings. 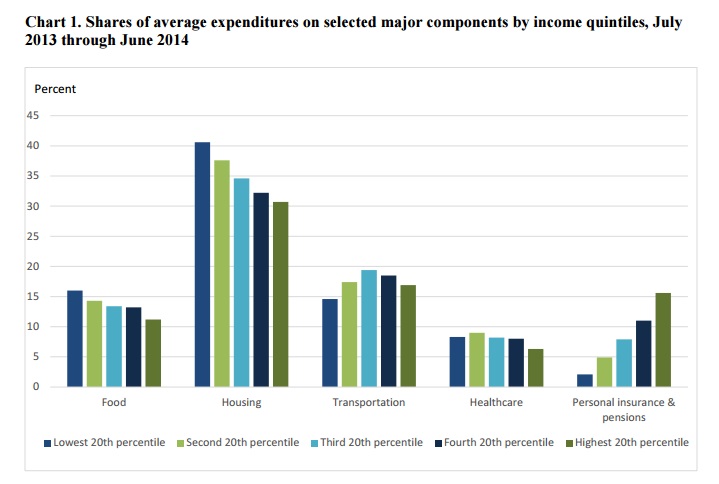 Focus on the Big Spends to Build Wealth

After taking a look at the numbers, it’s easy to see where Americans spend most of their money: housing, transportation, and food. If you want to build wealth, it’s important to optimize these big expenses to save the most amount of money with the least amount of effort.

Let’s say you’re trying to spend less on clothes, so you put back a $30 shirt at Target. If you eat out four times a week with your coworkers for $15 a meal, you’ll spend twice the amount of the shirt on lunch every week! Bringing your lunch will save a lot of dough over the long haul. 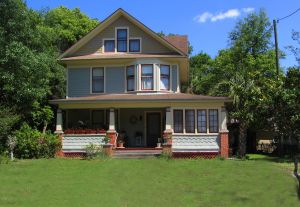 It might seem difficult to save money on housing. After all, if you are a homeowner, there are huge transaction costs to buying and selling. But if you’re house poor, it’s going to be difficult to make financial progress, even years down the road. If you’re truly honest with yourself, then it might be time to downsize or move to a cheaper area. If you rent, this is much easier. By moving and renting a cheaper place, saving you $300 each month, you’re saving the equivalent of ten $30 Target shirts every month just from that one financial decision…

When it comes to transportation, there are many ways to spend, including the payments (but hopefully you paid cash for your car), gas, maintenance, and insurance. But one large cost of transportation is less obvious: the value of the car will depreciate over time. A car loses 60% of its value within the first five years. That’s why it’s often a great financial decision to buy slightly used cars.

It’s important to buy the right car to reduce transportation expense. By purchasing a used car, you’ll let someone else take the financial hit of depreciation. And, they also cost less to insure. Doing your research to buy a reliable car will also reduce your maintenance costs over time.

Secondly, the less you drive, the less you’ll spend on transportation. Can you choose your next home so you’re close to work, groceries, and your everyday activities? Can you bike or walk instead of drive? You’ll get more exercise and spend less money.

To really bump up your savings, try to find the frugal trifecta: a place to live that’s inexpensive, close to work, and close to an inexpensive grocery store. This will allow you spend less on housing since the mortgage payments will be cheaper, you’ll spend less on transportation since you’re so close to work and the grocery store (and you therefore also don’t need a super-dependable car since you could easily take your bicycle instead), and you’ll be more prone to get groceries instead of dining out! Boom, the trifecta!

How do you spend money? What are your best saving tips?

This post has been written by Jenna, our staff writer who hails from http://pftwins.com.