Becoming Wealthy or Being Cheap? Or Both? 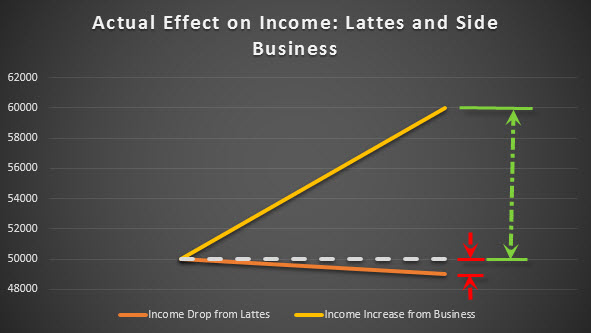 Are you taking actions toward becoming wealthy or are you actually just being cheap, likely never to get truly wealthy? And what’s the real difference? As Ramit Sethi often talks about on his blog, I Will Teach You To Be Rich, cutting out a few expenses is not going to dramatically change your financial future. In fact, if you ordered a tall latte every day before work for a year, it would cost you about $1,000. That sounds like a lot of money, but what if, during that same year, you started a side business that generated an additional $10,000 in profits?

As my nifty graph shows above, the difference maker was not those negative lattes, it was the positive business income. Becoming wealthy is often done by massively increasing your earnings, not by scrimping and saving your way into a poverty-stricken lifestyle.

Many would say (including myself from time to time) that the key to becoming wealthy is to live below your means, to start saving early, and to consistently invest your money into the market. This has been a rock solid plan for a multitude of individuals throughout the years, and many have become millionaires by doing exactly this. The method of scrimping, saving, and investing the difference does work, but it is highly dependent on one thing: time.

Joe and Penny are each 27 years old. By working unbelievably hard through school, and by living on as little as possible after they earned their degrees, Penny and Joe are completely debt free and are excited about buying their first house (a fixer-upper of course). At this point in their lives, their earnings are up, their expenses are down, and they decide to invest $5,000 per year into Joe’s retirement fund at work. By doing this consistently for the next 40 years (so they contribute $200,000 total), they can expect to retire with $1.4 million! This is the power that compounding can have when you start early in life. 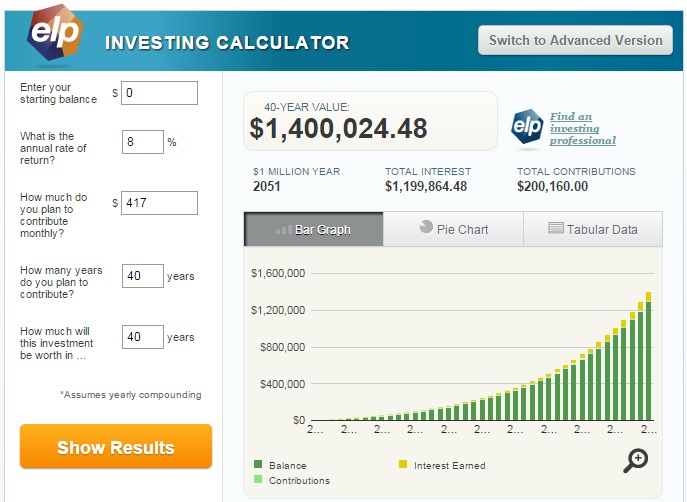 The Math For The Rest of Us

So what about the rest of us that are no longer 27 years old? What about the individuals that are middle-aged and have yet to find any extra money to put into savings? Will this plan work for them?

As CBS Money Watch announced last year, roughly 26% of 50-54 year-olds have absolutely nothing saved for retirement. Nothing. Nada. Bupkis. At the age of 50, can they become wealthy with the scrimp and save plan?

Let’s say that Jim and Sarah, at the age of 50, are suddenly able to scrounge up $5,000 per year (which would be an absolute miracle considering they have saved up exactly $0.00 during their lifetime). If they put this money into their retirement fund and let it sit until they were 67 years old (just like Joe and Penny did), how big would their nest egg get? 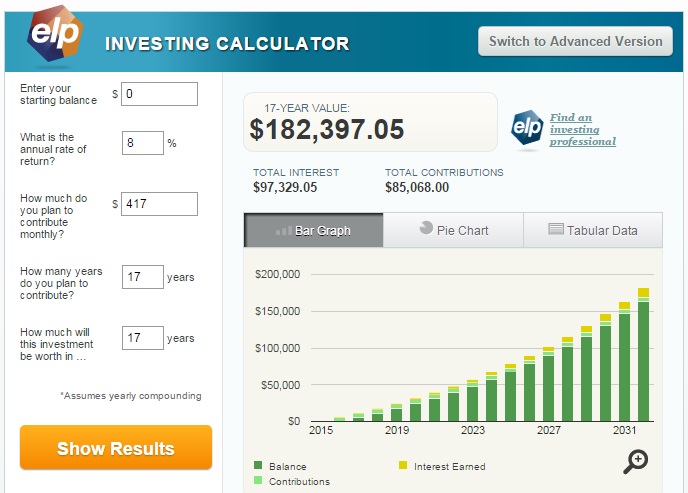 After 17 years of hellish saving, Jim and Sarah were only able to save up $182,000. It’s definitely better than nothing, but will it allow them to live a lavish retirement on the beaches of South Florida? Ummm, probably not. Time was not on their side at the age of 50, and becoming wealthy by scrimping and saving was just a pipe dream that never stood a chance.

Becoming wealthy is about more than just spending less than you earn and saving the difference in a retirement fund. Heck, even if you do start investing in the market early, there’s no guarantee that you’ll become wealthy! Maybe your stock selections won’t earn as much as the general market, or maybe the market as a whole bites the big one in the next few decades. The scrimp and save plan is definitely one method in becoming wealthy, but there’s no guarantee that it will work.

“So what else is there?” “How can anyone become wealthy without putting a single cent into the stock market?” “Didn’t you say that compound interest was important?” — I get these questions often and there always seems to be a raised eyebrow that shows they think I’m some sort of radical personal finance lunatic. 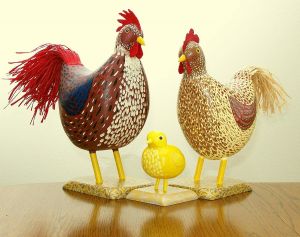 You know, if you trace your family tree back a hundred years, the stock market probably wasn’t even talked about, but there were still wealthy people. They knew compounded money was important – they just did it a little differently back then, and much of it can still be done today.

Other Methods of Investing

Instead of just throwing money into some general market and hoping that it grows because that’s what it’s always done (which your ancestors probably would have thought was crazy stupid by the way), they put their money into products that produced more money. Farming was the common ticket back then. A couple might have started out with a few roosters and hens, which produced some eggs for eating and a few chicks. The chicks then would grow and produce eggs of their own, which would then compound your net worth and earnings from the previous year. See how this works? Becoming wealthy doesn’t need to have anything to do with the stock market.

Other areas to increase your nest egg could be through…

And, by putting your money into these areas, you’ll naturally have much more control over how successful they become. And, you could probably grow your money at a faster rate in these areas as well! Simply get started, earn some money with your new venture, and put much of that money back into the business so that it grows larger and larger.

If you’re investing in real estate, start out with one property, save the earnings, and then buy a second property when you have enough money saved up. Now, instead of just one cash-producing investment, you have two, which will double your cash flow. Follow that same process, and you’ll soon have four investment properties, and then eight! The power of compounding does amazing things, even when your money is invested outside of the stock market.

Are you interested in becoming wealthy? What is your plan for building wealth?