9 Top Reasons for Poverty in the United States

It’s hard to believe that poverty is still rampant in a country that has produced so many wealthy individuals, but the numbers don’t lie. In 2014, the United States Census Bureau reported that 46.7 million people were living in poverty – that’s nearly 1 out of every 6 people! So what on earth causes this deplorable life status? How is it that so many people hardly earn enough to survive? It’s time we get these questions answered and talk about the reasons for poverty in the United States. 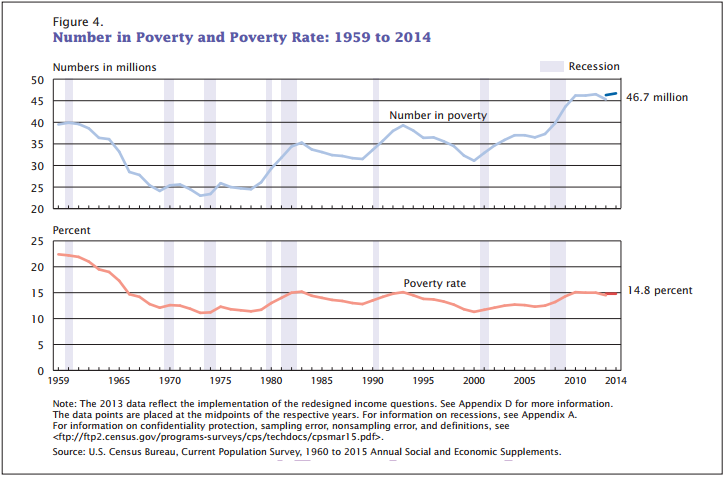 Top 9 Reasons for Poverty in the United States

Unfortunately, there is not one single formula that can keep everyone out of poverty. There are too many life situations, too many economic variables, and too few people that care. (Sometimes this even includes the people that are in poverty themselves). Have you ever been curious about the reasons for poverty in the United States? The straight answers are presented below.

1) You Were Born With the Wrong Skin Color

This isn’t meant to be racist – it’s an absolute fact. Those that are born black are the most likely to live in poverty. They earn an average of just $35,000 per household and over 25% of them live in poverty. On the other hand, if you’re born white (non-Hispanic), your average family income is over $60,000 and only 10% of you will live in poverty. Quite the difference isn’t it? 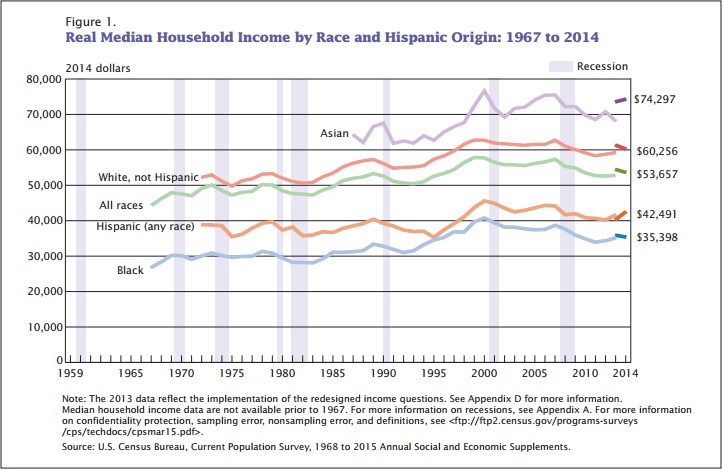 2) Stagnant Wages for the Least Skilled

Beyond the 1960’s, the average wage of the lowest-fifth remained stagnant, making it more and more difficult for the poor to gain traction. So what caused this stagnation? Mostly, this phenomenon can be explained with simple supply and demand.

In the 50’s and 60’s, the economy was booming which created a very low unemployment rate. Demand for employees was high, even for the least skilled among them, and the wages increased with demand. When the economy slowed in the 70’s and beyond, unemployment rose to an average of 7% or more. Employers were hiring, but only the better of the low-skilled employees, which left the wages stagnant for many years to follow. 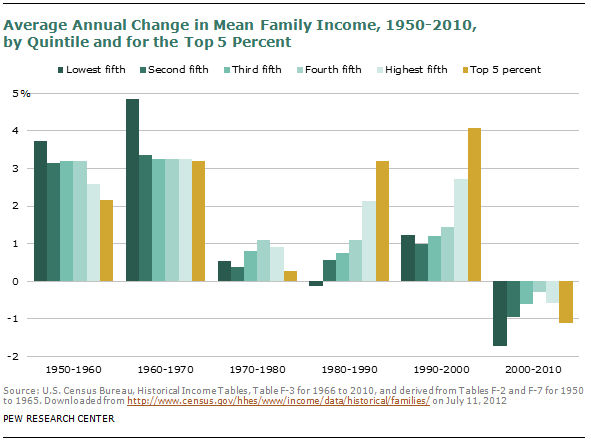 According to Princeton studies, poverty in female-headed households is four or five times more likely than married-couple families. It sounds a bit shocking at first, but when you stop to think about the challenges a single parent faces (namely, childcare expenses on a single income), the reality rings true. Unfortunately, over the past decades, single-headed households are on the rise. And, this increase is definitely chalked up as one of the reasons for poverty in the United States. 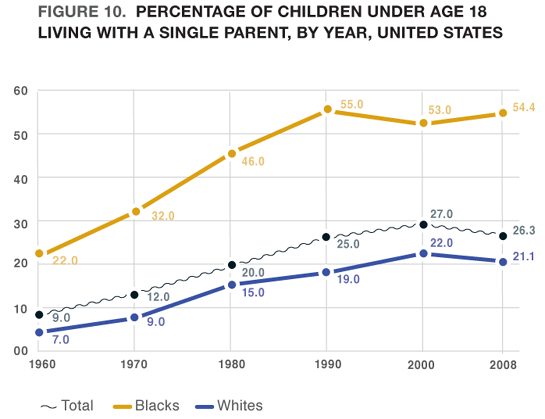 4) Less Government Focus on the Poor

Aside from Social Security, Medicare, and unemployment compensation, much of the nation’s legislation was formed many decades ago and doesn’t have the same impact today as it did then. The challenge in creating new legislation (as I see it) is how to create a program that helps the needy without enabling those in poverty. In other words, how can you institute a program that helps only those that truly want to dig themselves out of poverty and not use it as a way to freeload off the government. I don’t think anyone has quite figured this one out yet.

Congress has cut spending on K-12 public schools by nearly 20% since 2011. Somehow, many schools have still kept the satisfaction of parents throughout those years, but I can’t imagine that the schooling is as effective when it’s being funded with 20% fewer dollars. Yet one more add to the reasons for poverty in the United States.

Even though wages might not be increasing, the cost of living almost always does. Since 2007, the Consumer Price Index has increased by over 17%, meaning the cost of necessary goods has increased substantially while the lowest-fifth’s income has decreased. 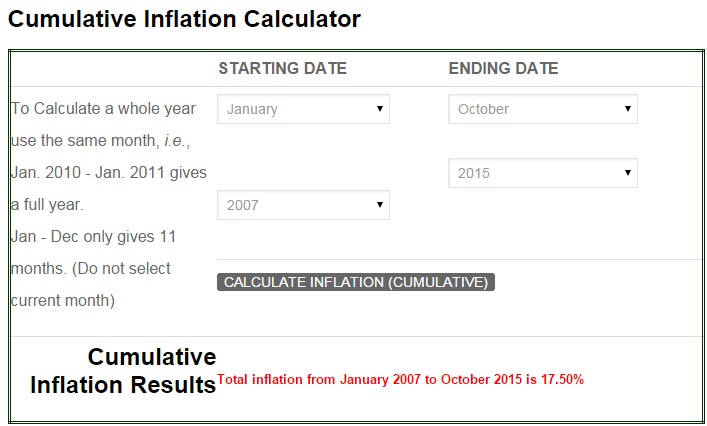 As the National Bureau of Economic Research confirmed in a recent post, globalization can both benefit and harm the poor – it really all depends on who you are and where you live. While globalization could in fact create cheaper products that benefit the poor, one of the top reasons for poverty in the United States is still globalization.

You see, globalization encourages the manufacturing of a product to take place within the country that can do it most cost effectively. Since the United States continues to increase the minimum wage, fewer and fewer low-skilled jobs are sticking around. Instead, they’re flowing out to Thailand, China, and Vietnam – thereby hurting the United States citizens.

8) Increase in the Cost of Medical Care

Medical costs have been on the rise over the past decade for sure – maybe even longer than that, and it definitely ranks among one of the top reasons for poverty in the United States.

People get sick, it costs more and more to make them better, and they’re left with a hefty bill that they cannot pay. President Obama tried to reverse the rising cost of medical care with this Affordable Care Act, but it has yet to gain traction and as you can see below, the costs continue to rise far above the average cost of inflation. For those living in poverty, sickness is certainly something to be feared. Get sick, and you might be stuck in poverty forever.

While one of the top reasons for poverty in the United States can certainly be attributed to medical costs, there is something out there that is beating down the poor even more: the rising costs of college tuition. 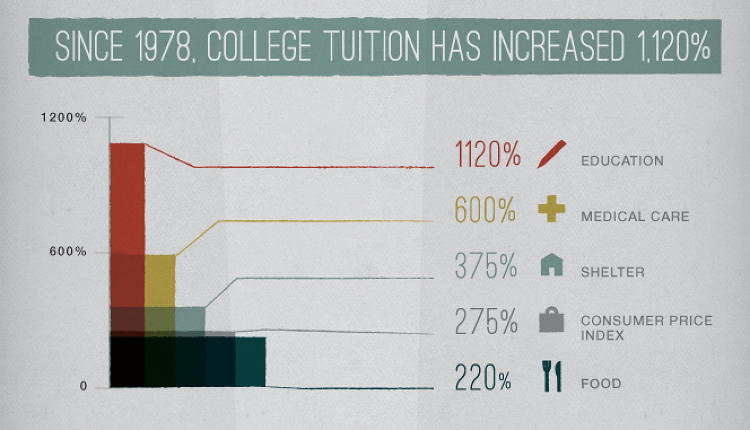 Since 1978, medical costs have increased by 600%, which is HUGE, but the cost of education has increased by almost double that….1,120%. It has far exceeded the cost of housing, food, and is far beyond the income trends. The costs of college are simply out of control and it’s making it almost impossible for the poor to get ahead.

There are many theories for the dramatic increase, but it all stems back to basic supply and demand. Everyone is taught that success comes after going to college, student loans are pretty easy to get, and therefore demand has shot through the roof, along with college tuition of course.

Many might say, “Well those in poverty can just apply for loans too. Then they could get a solid education and get themselves out of poverty.” Not so fast. Many kids don’t have the credit to get loans on their own – they need a co-signer. But, not just any co-signer – one with solid credit. Typically, poverty stricken folks don’t have the best credit….which means that junior won’t be able to achieve his college dreams. It’s a sad story, but it’s the reality of life for those in poverty.

My Personal Take – Reasons for Poverty in the United States

When I was in college, I distinctly remember riding in a car with my friends. We spotted a homeless man sitting on a park bench and my initial response was, “Why doesn’t that bum just get a job?”

A couple of my friends balked at my comment and took the side of the homeless man. “Maybe he lost his job and can’t find more work…Or maybe he has piles of medical bills and got foreclosed on because he couldn’t make the mortgage payment.” It got me thinking a little differently, but I still struggle with the life of those in poverty. “Isn’t there some way they could get themselves out?”

Even with all the data above, I still think the answer is “Yes” for many. What do you think? Do you think the above reasons are enough to keep the poor in desperate need? Or do you think there’s something the poor can do to get out of their vicious cycle of poverty?

Do you think these reasons for poverty in the United States are valid? How do they get out?

Editor’s Note: Want to avoid a future life of poverty? Then you should absolutely start tracking where your money is going. Try out the Personal Capital tool for free through this link. Set up your budgets, track your spending, and invest for your future – all for zero dollars. Take advantage of this offer and get yourself on track today.