9 Reasons Why I Never Want to Win the Lottery 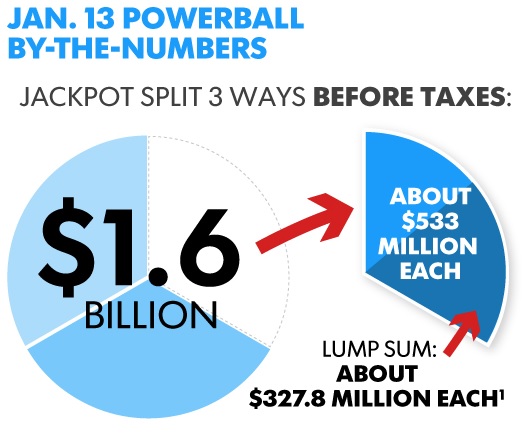 Thank goodness I didn’t win the $1.6 billion Powerball! Of course, I probably would have had to buy a ticket first, huh? No thanks. Not when there are so many reasons why I never want to win the lottery!

9 Reasons Why I Never Want to Win the Lottery

Often times, more is better…but not in this case…not in my opinion anyway.

#1. Friends look at you differently

Trent dug into the lives of many people that have won the lottery – from a $1 million prize to a $315 million dollar win – they were all pretty much the same when it came to their friendships.

Money changes everything. When your friends find out that you’ve won a substantial amount of money, they will treat you differently. They’ll suddenly expect you to buy their lunch when you go out to eat or get you a super sweet gift when their birthday rolls around. And the relationship – the way you used to talk and relate – it just won’t ever be the same.

#2. Family will make you feel like you owe them

While friendships are tough to keep after winning the lottery, family can be even worse! Many families have a sense of entitlement. If you win the lottery, they might expect you to pay off their debts, buy them a new car, or even upgrade their house! If your brothers or sisters are living a rough life, they’ll probably share your excitement for winning that huge lottery pot….but only because they’re expecting some cold hard cash for themselves….

#3. You wouldn’t fit in with anyone

Basically, you’d become the Beverly Hillbillies of today. You’d go from broke to stinkin rich in a matter of minutes, but you’d still have the mentality of the poor. Those that are poor will view you as rich and out of their class, and those that are rich will look down on you because you didn’t earn your wealth like they did. I hope you like money, because it’ll pretty much be the only friend you have after you win the lotto.

#4. The winnings aren’t as big as everyone thinks

This Powerball jackpot was $1.6 billion. Whoa – that’s a lot of moola. However, three different people won the prize, which cuts the winnings down to $533 million each. If you want the lump sum today, then the payout amount is $327.8 million. And then this amount will be taxed heavily, leaving you with $170 million or so.

Everyone will look at you like you’re a billionaire…but in actuality you won only about a tenth of the $1.6 billion. Bummer.

#5. The lawsuits will start almost immediately

Once people find out that you have millions of dollars, they’ll start targeting you for lawsuits. They’ll fall in your driveway, try to get hit by your car, heck, they’ll probably try to sue you for something that happened 10 years ago if they think they can get a few million bucks out of you. People are greedy and often just think of themselves. If they want your money, they’ll do almost anything to snatch it from you. Are you beginning to see why I never want to win the lottery?

Entrepreneurs often need funding, and who better to ask then the latest lottery winner? If your name gets out there as the winner, you’ll be approached by hundreds of people that want you to invest in their idea. Many of the ideas will suck, or might simply be a ploy to get their hands on your money. Either way, you’ll be bothered will all of the requests and likely never earn a dime from the massive amounts of investments.

I worked hard to become debt free – Liz and I have paid off our house and we even invested in a rental property recently. We’re increasing our wealth one step at a time and feel great about it! If we were to suddenly win the lottery and brought home hundreds of millions of dollars, what would we do with our lives? Move to Hawaii and sit on the beach all day? I’d be happy for about a week and then things would get old.

There’d be nothing to work toward, nothing to accomplish, and no prize to earn. For me, life would become stale and uninteresting. I never want to win the lottery for the simple reason of purpose. Might sound crazy, but it’s the truth.

“A very rich person should leave his kids enough to do anything, but not enough to do nothing.” — Warren Buffett

#8. I wouldn’t have the knowledge to keep it

My net worth is nowhere near $100 million dollars, so what would I do with that amount of money if I suddenly won it? I have absolutely no idea…. There are dozens (maybe even hundreds or thousands) of stories of lottery winners that have ended up bankrupt because they didn’t have the knowledge to save or invest any of it.

I never want to win the lottery because I’d probably hold onto my money better if I actually earned it.

#9. Would result in a search for happiness through stuff

Lamborghini’s, multiple mansions on the ocean, and a private helicopter. Sounds pretty nice huh? Yeah, maybe at first, but stuff doesn’t make you happy. In fact, Time has discovered that more stuff actually makes you more miserable! As materialism goes up, their emotional well-being suffers.

I have a car that will take me from point A to point B…like cars are meant to do. Having a $200,000 car instead of a $2,000 one won’t increase my happiness. The same is true for my house. It’s purpose should be to keep me dry while I sleep and to help build friendships while I’m awake. A mansion will likely make me no happier than my simple home in my simple neighborhood.

Do You Still Wish You Would Have Won $1.6 Billion??

Even after giving my reasons, people still think I’m nuts that I never want to win the lottery. It’s pretty simple though. I’m happy today. I love my wife. We have a beautiful girl on the way. And we not only have the means to survive, but we can go on vacations, buy gadgets, and even give nice gifts to others once in a while. What more do we need? Nothing. So there’s absolutely no need to play the lotto, plain and simple.

What about you? I’m I nuts since I never want to win the lottery?