Did you know that only 20% of the millionaires out there actually inherited their wealth? For whatever reason, many of us have this notion that wealthy people are born with a silver spoon in their mouth. They’re all brats that are thankful for nothing and expect to be handed everything. The regular guy or gal couldn’t possibly get wealthy in America…

In reality though, 80% of America’s wealthy are 1st generation rich. Meaning, they’ve absolutely earned every dollar that’s in their bank account. No silver spoons, no trust funds, no inheritance.

Maybe it just makes us feel better about ourselves when we look at our embarrassingly low bank account balance, or maybe we just want to keep sitting on the couch without remorse. The basic truth of the matter though, is that the large majority of rich people work hard to make their fortune.

5 Top Ways to Get Wealthy in America

Instead of coming up with a million excuses about why you’re poor, why not use that brain of yours to think of ways that can earn you wealth? Wouldn’t that just be logical. Oh, wait a minute…that would mean that you might have to trade in your TV for some reading glasses – you know, so you can actually learn something worth while each day.

Are you honestly up for the challenge? Do you think you could stop making excuses, put in the effort, and work an extra 10 or 20 hours a week? If you truly want to know the top ways to get wealthy in America, then read on my friend. Soak it up, put in the work, and become one of the next 20.6 million millionaires that are projected for 2020.

1) Start Your Own Business and Sell It 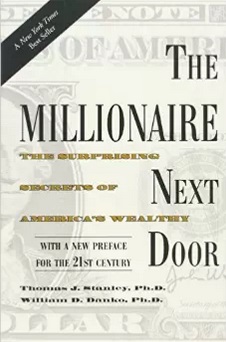 According to The Millionaire Next Door, two-thirds of the millionaires in this country own their own business. They might own a farm, a welding business, or pest-control operation. The business doesn’t have to be pretty, and often times it isn’t. But, that doesn’t mean that the business doesn’t earn some serious money each year.

Let’s dive into this a little more deeply actually – with a real life example:

Last summer, my brother had a skunk problem – there was a family of 8 living under his house. He had no choice but to call the exterminator. Over the course of 2 weeks, the exterminator stopped by approximately 8 times to set live traps and remove the creatures that got in there. In the end, the exterminator spent roughly eight hours on this job and earned $600 for his efforts. That’s $75 an hour. If this guy worked a 50 hour week (like many of us do), guess what his yearly income would be? $195,000!!

You don’t need to be a doctor or lawyer to get wealthy in America. All you need to do is find a need and provide the solution.

2) Invest in a Start-Up Company

Ninety percent of start-up companies fail, but that means that 10% of them succeed. And, some of these become mindblowingly successful, which is why this has made the list of the top ways to get wealthy in America.

Bill Gates’ company Microsoft went public in 1986. If you would have invested the $21 on each of the 100 shares at that time, your investment would be worth nearly a million dollars today. A similar story is told for companies like Apple, Dell, and Amazon. Each one of these powerhouse corporations were small and insignificant at one time, but today their income statements and balance sheets carry numbers that are in the billions.

So how can you find companies like these when they’re still small and in the start-up phase? Thankfully, Forbes already did a bit of the legwork for us. According to their research, one can invest in start-ups:

By investing some money into a start-up, you’ll likely receive a certain number of shares of the company. In other words, by simply funding a bit of the operation, you become part owner of this start-up corporation. It’s one of the top ways to get wealthy in America, but don’t forget about the risks that are involved.

3) Develop a Product with a Residual Value

Authors, song-writers, and designers are all classic examples of occupations that produce products with residual value. The concept is pretty simple: you put in a bunch of work without getting paid, then you present your product to the world and hope they like it. If they hate it, you essentially wasted hundreds of hours of your life for nothing. But, if they love it, then you could become one of the wealthiest people in America as you get a paid a percentage of every single product that’s sold. Sell a million products at $3 a piece and you’ll earn yourself a cool three million bucks.

The reality of it though is that books and songs don’t sell like they used to. This is why I said they are classic ways to earn a passive income. Put bluntly, you just can’t make money in these categories anymore. So what are the new ways of earning a passive income?

It’s certainly not as simple as putting words on a page anymore, but these methods have netted people millions of dollars in just a couple of years or less. Interested in ways to get wealthy in America? This one certainly has its perks.

There are two main ways to invest in real estate. Either you can:

(1) purchase a property for below-market value, fix it up, and sell it for a profit, or

(2) you can buy a place with the intention of renting it out.

If you ask existing millionaires about the best ways to get wealthy in America, many of them will have just two words for you: real estate. But why? Many reasons actually. According to Entrepreneur.com, people should invest in real estate because:

Because of the reasons above, Liz and I began investing in real estate last year. In fact, it’s one of our major plans to retiring wealthy! 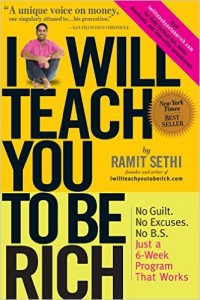 5) Save and Invest Heavily

The great majority of you probably won’t write a best-selling book or come up with a million dollar app idea, but that’s okay. One of the best ways to get wealthy in America is actually pretty basic. Live on less than 80% of your income and invest the difference.

Ramit Sethi explains this concept in his book, “I Will Teach You to be Rich“:

“On average, millionaires invest 20% of their household income each year. Their wealth isn’t measured by the amount they make each year, but by how they’ve saved and invested over time. In other words, a project manager could earn $50,000 per year and be richer than a doctor earning $250,000 per year — if the project manager has a higher net worth by saving and investing more over time.”

Saving and investing has become the single most effective way to get wealthy in America. By starting early and investing consistently over many years, a low-income janitor has a very real chance of earning far more than a highly-paid doctor that doesn’t start investing until he’s in his 40’s.

Go Ahead. Get Wealthy.

There are honestly so many ways to get wealthy in America today. If you truly want it, all you have to do is roll up your sleeves and go get it.

Will you do what it takes to get wealthy? What’s your plan?