Why Obesity and Poverty Often Go Together

In 1980, only 15% of Americans were considered to be obese. By 2008, this number grew to a staggering 34%! For those of you that step outside your house on occasion, this probably isn’t a big shocker for you. Waistlines are bigger, cheeks are puffier, and the waddle has definitely become more pronounced. It’s quite noticeable.

So what’s the deal? Why are so many people getting fat these days? And does this have any correlation to the growing number of broke people? I say absolutely yes, but for reasons you might not think of. 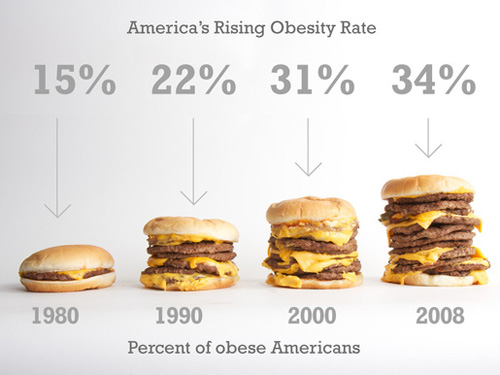 Why Obesity and Poverty Often Go Together

In my opinion, staying in shape is mostly about behavior. If you decide to eat fried food and sit in front of your TV every day, then you know what? You’re going to gain weight. The same story is true for the broke people out there. If they sit around choosing not to increase their wealth, but continue to spend money, then they’re going to end up poor! It’s definitely not rocket science, it’s just about simple choices that lead to an obvious end result.

So what are the typical reasons for obesity and poverty? What behaviors are making the correlation between the two so strong?

By now, I think all of us have heard about the age-old study of the kids and the marshmallow (you know, the study where kids could get two marshmallows if they fight off the urge to eat the one in front of them for a certain length of time). The kids that just couldn’t resist and popped the marshmallow in their mouth are proven to become less successful in life. Mainly, it’s because of their short-term mentality.

The lure of two marshmallows just isn’t enough when there’s one plump, flavorful one sitting right there in front of you. The same truth holds for us in our adult life.

Many of us have short-term mentality, and it’s making us fatter and more broke with each passing day.

No Desire For the Truth

There is so much information out there, both for how to be healthy and how to grow wealthy, but very few people are actually seeking it out. What’s the reasoning behind this? Either they believe:

There’s no delicate way to say this. People are just more lazy today.

Instead of playing outside, kids are playing video games and watching TV (thus making them fatter). This carries into their financial habits too. Instead of saving money by fixing something themselves, they simply buy a new one – instead of building wealth by actively investing in the market, they shop on Amazon (thus making them poorer).

Staying in shape is hard work. Building wealth is hard work. Getting fat and spending all your money is easy, which is why so many people are jumping on that boat.

Remember the days when fat kids were the ones that got picked on? Today, the tables are reversed. Most of the kids today are pudgy and plump, so they’re picking on the kid that’s actually healthy and skinny. How messed up is that? Being fat is becoming the norm. If people don’t want to be singled out, they’ll add a few pounds and fit in with everyone else.

The norm used to be that people lived in small houses, drove modest cars, and cooked all their meals at home. Today, it seems like everyone wants to live in a McMansion, drive a Tesla, and dine out at every restaurant within 50 square miles. If you want to be normal today, you’ll spend almost everything you have and go in debt to the tune of over $200,000. If you want to fit in today, you’ll buy up a bunch of crap and have no money in the bank.

We’re an arrogant people. We already know everything, so what’s the sense of reaching out for information that we already know? For many, debt is thought to be a necessary part of life that can actually benefit your well-being. Those that pay off their debts are thought to be idiots because more money can be made in the stock market.

These ‘absolute truths’ aren’t absolute at all. Those that take a moment to step back and view the situation from a new perspective might realize that when debt payoff is a priority, more money finds its way to the debt payments than would ever be placed into an investment. Money cannot be viewed strictly with dollars and percentages, but with behavior as well.

Our health is the same story. Some people believe that a pizza is healthy because it provides us with many of the necessary food groups (grains, meat, vegetables, and sometimes fruit). There are so many foods that are considered healthy that are absolutely terrible for us. Unless we set aside our arrogance and actually reach out for the truth, our waistlines will continue to expand and obesity will be just around the corner.

This reason is listed last, but it can often be the most dangerous. More and more people today are becoming victims to their situation. You can identify these people pretty easily because they’ll often say things like:

Many of us have the “woe is me” disease. Nothing is our fault and we can’t do much about our situation, so we just wallow in our self-pity and do nothing about it.

If we’re chunky, we say that we’re just too busy to eat healthy. If we’re poor, we decide that it’s the government’s fault for stripping 35% out of our paycheck each week. Somehow we fail to notice that our constant cheeseburgers are keeping us fat and our brand new car (on payments) is keeping us broke. If you’re a victim, then you’ll probably turn into the exactly the person that you don’t want to be.

The tie between obesity and poverty is strong. Change your mentality, and you can become healthy and wealthy!