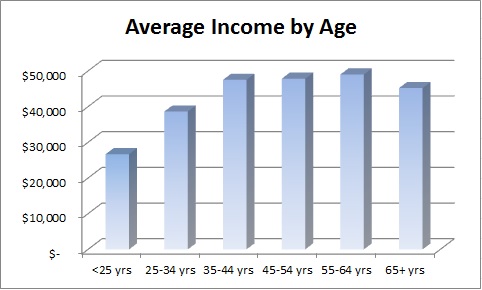 Your boss drives a Porsche. Your brother-in-law owns a beautiful cottage on a lake. And your Great Aunt Suzy seems to travel to a new country every week. Is everyone really that much more wealthy than you? Or are you the only wise one that isn’t spending well beyond your means?

No matter how little we might care about material things, we all (from time to time) still wonder how we compare to our friends financially. Unfortunately, it’s considered “uncouth” or “rude” to simply ask someone how much they earn a year or how wealthy they are in terms of their net worth.

The purpose of this post is to quench your thirst for nosiness, and also so you won’t just blurt out, “Are you rich or are you in debt up to your eyeballs?” What is your net worth and income, and how do you compare to the average United States citizen?

The Average Net Worth 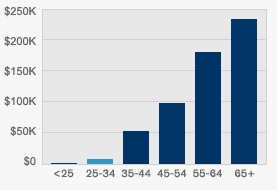 Here’s the basic net worth breakdown by age:

Let me explain to you how pitiful these numbers are. Most people have a steady job by the age of 25. That job typically has a 100% match up to 3% of your contribution. If you would consistently contribute just $25 out of your bi-weekly paycheck for 40 years of your life, your 401k would likely grow to $363,704.28. By doing just this, you can become above average in this nation.

Based on the above numbers, it’s pretty apparent that most people aren’t investing. In fact, CNN recently reported that over half of Americans had absolutely no money in the stock market. So how are they creating their net worth? They’re living in it! It’s their house! Once these homeowners reach the age of 65, they’ll have two choices:

Since many people seem to get emotionally attached to their homes, they force themselves to keep working and discover that they might never be able to retire…

Don’t put yourself in this situation. If you’re serious about being better than average when it comes to your net worth, then I suggest going the route mapped out by the Financial Samurai:

If you’re able to invest in a pre-tax 401k and a post-tax Roth IRA, along with building up equity in your home, then you could be well on your way to retiring just as you’d always dreamed. While your friends will have to learn how to cook on a strict budget, you’ll be eating lobster and steaks while gazing over the Pacific Ocean! Totally worth it if you ask me.

Here’s the next topic that you’re never supposed to discuss while you’re out with friends: your average income. So what is the average income anyway? And should you be earning more than the stated average since you’re in your mid-50’s? These are all legitimate questions, and you’re about to get your answers!

According to BLS, the median incomes by age are as follows:

Based on the stats from BLS, you should be able to exceed the median wage by the time you reach 35 years of age. At this point, you should be earning $47,528 to keep up with the average person. The median income peaks between the ages of 55-64, and then falls a bit once people hit retirement age (no big shocker there).

Now that you know the average net worth and income dollars, what are you going to do about it? If you’re like my friend in middle school, you might find out that you’re above average and then start coasting through life, content with where you’re at. Just as an FYI, I’m pretty sure he’s still in prison as I write this post. Please don’t settle for average and start coasting. In terms of net worth and income, average in America is broke. DO NOT BE AVERAGE.

Instead, choose to use this information to get better and earn more. When you reach retirement age, you probably won’t mind having a few million bucks sitting in your investment accounts. Just sayin.

So what about you? What do you think about the average net worth and income amounts?