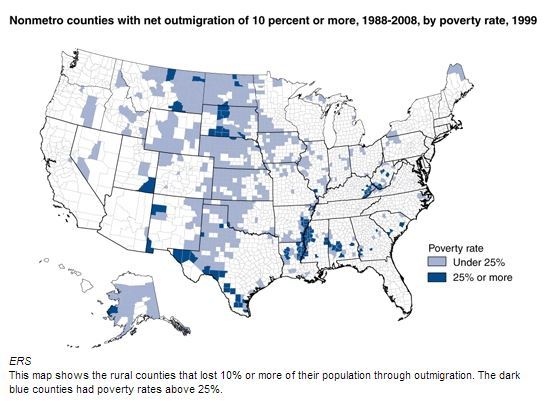 Brain drain: noun. informal. Refers to the emigration of intelligent, well-educated individuals for better pay or conditions, causing their places of origin to lose skilled people, or “brains”.

If you’ve ever been to the Midwestern United States (or any of the largely blue states on the map), you’ve noticed the brain drain. It’s also known as ‘rural flight’ and ‘the hallowing out of the middle.’ What were once bustling towns and farms are now ghost towns and corporate farms. What people have realized is that the world is their oyster. They don’t need to stay close to home. They can take their college education and hit the road for possibly greater opportunities. It’s having a big impact on the landscape of America.

Young, educated millennials and their desire to move is perpetuated by the lack of jobs. See, the Midwest was populated by farmers and people who created an infrastructure to help the farmers. But now in 2016, fewer people are able to farm the same amount of acres. For instance, one quarter section of land used to be able to raise a family of five. That was a mere fifty years ago. Now, it would take eight times that amount of land.

This means there aren’t four houses per mile anymore. The countryside is shrinking and the towns are as well. It’s not as though something catastrophic has happened. It’s just the evolution of our species. Essentially, machines are now able to do what it used to take a small army to accomplish.

The Reasons for Leaving

There are jobs that remain in the rural Midwest. But they generally don’t pay well. That, combined with the ability for anyone to move quite easily nowadays, and you get brain drain. People who want to go far in life are leaving home.

It’s not always because they want to leave home. There are many people who love small town living. Many Midwestern towns offer good schools, cheap housing and a low crime rate. But many millennials are being forced to move elsewhere.

I’ve lived my entire life in Nebraska. But I’m starting to grow restless. I work online. I can live wherever. And while telecommuters may bring some life back to rural America, it’s doubtful to make a large difference. That’s because internet speeds in rural locations and small towns are too slow to support our busy lifestyles.

It’s almost like these rural locations are asking us to leave.

The same thing is going on in other countries. I know a Nebraska politician who recently visited China. He was there installing large irrigation systems in an attempt to make their farmland function like ours in the United States. The farms get bigger while the number of farmers shrink. China wants most of their citizens living in cities.

It’s Not Always About Your Career

People who partake in the brain drain also do so for reasons other than career. Think about it. When people are unable to find good jobs in the rural Midwestern states, other opportunities become illusive as well. There’s beginning to be a lack of entertainment options, a lack of new housing, the list could go on. Rural Midwestern states are struggling to keep the populous satisfied.

I don’t mean for this article to be depressing. After all, nothing is actually going wrong here. No one is to blame. It’s just the evolution of our species and our society. At one point, we encouraged people to settle the Midwestern states. They farmed. They fed the country. We’ve just moved past this point to where people can settle in other places now. Some day, the Midwest may grow in population once again. Who knows. Perhaps one day the entire country will be as densely populated as New York City.

I think what’s important here is to remind ourselves that what was a good place for one generation may not be good for the next. We shouldn’t feel guilty and stay. We should do whatever is right for our own situation. If you want to get ahead financially in life, as I do, we need to make the appropriate moves. We must move with the money. It only makes sense.

What is your opinion on the brain drain? Are you staying? Are you going? Or… are you arriving? What’s best for your financial situation?

This post was written by Will Lipovsky, one of our excellent staff writers here at Life And My Finances.