Does Junior Really Need to Go to College? 5 Reasons to Skip It 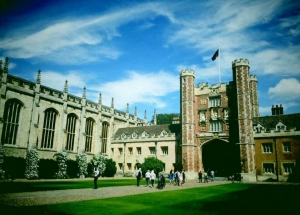 Everyone wants to be that perfect family. Mom’s beautiful. Dad is getting his sophisticated grays. And they have two caring and incredibly intelligent children – one’s going to be a lawyer, and the other a doctor.

Okay now let’s be real. Is that your family? Probably not. You’re 20 pounds heavier than you’d like to be. Your spouse hasn’t read a book since grade school. And your kids….Well, your kids just can’t seem to figure out this thing called life.

However, what does every parent preach? Let’s all say it together…

“You son, need to go to school and get an education so you can get a safe, secure, well-paying job that lasts you for the rest of your life.”

Then, we proceed to ship Junior off to school, so proud of him for listening to our advice. He sure is going to be a success with his college degree!

Does Junior really need to go to college? Is it actually beneficial for him to do so? Many would argue, “Of course!”.

The majority of the time, my response is, “Absolutely not.”

How on earth could I possibly advise that someone skip out on college? It’s quite simple – I actually sat down and thought through the situation….instead of following the lead of most parents that just push their children off to college, assuming that it’s the best thing for them.

Based on my research, I have discovered five indisputable reasons why Junior may not need to go to college.

It’s a not-so-well known fact. Approximately 64% of jobs don’t require a 4-year degree. So why is it that every single parent under the sun is pushing their kids to go to college? After all, two-thirds of them will be left working a job that never required a degree in the first place! Sounds pretty senseless to me. Does little Johnny need to go to college? Ummm, not likely.

But what about his income? He won’t be able to survive because his pay will be so low without that degree! This is yet another misconception.

Not EVERY college drop-out becomes a bum, just like not every college graduate earns a six-figure income! Am I right?

If your kid doesn’t love the idea of going to college, and you’re afraid of him digging through trash cans behind Wal-Mart, then maybe you should both read this piece by LifeHack: 20 High-Paying Jobs That Don’t Require a College Degree.

According to a recent Forbes article, the national average cost of attending a public college is $28,000 per year. If you’re dreaming of attending private school, your bubble might just burst when you hear that it costs $59,000 per year. That’s right, $236,000 for a four-year degree. Yikes!

I was 22 years old and one of my good friends was getting married. As I sat at the reception table, I heard one of my high-school classmates bellow, “So how many of you have earned $200,000 since high school?”

My response in my mind was, “Of course none of us have you idiot, we’re just wrapping up college.”

My second thought was, “Wow, how pompous and insecure do you have to be to shout out that you’ve earned $50k a year for the past four years?”

Years later, I discovered that while my high-school classmate was indeed pompous, he actually did a great point. If you’re going to attend college, you sure better plan on making more money in your field than if you would have never gone at all.

If I earned an average of $20,000 more than him after receiving my diploma, how long would it take me to catch him?

We’d be 33 years old before finally hitting those cross-roads. And then I would like soar past his income and leave him in the dust, right? Again…not so fast.

When you go to college, you’re putting every single penny you can muster toward the cost of schooling. There’s nothing left to invest.

But, when you jump straight into work and earn $50,000 a year, don’t you think that you could put a solid chunk of change into your retirement funds?

The benefit of the college grad though, is that he’ll be earning more money and can stash away $600 a month instead of $400 like the high-school “dummy”. Surely, the college grad will come out victorious….right? 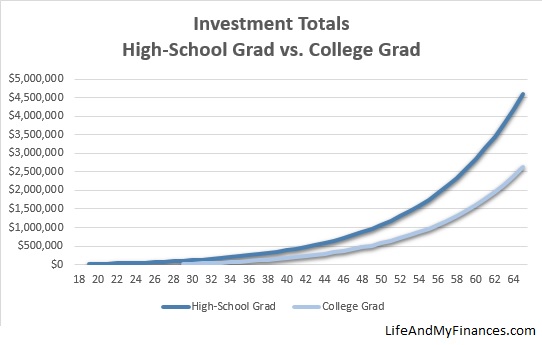 Not only does the high-school grad end up with more money at retirement. He ends up with nearly $2 million more than the college grad!

Ever wonder why 80 year-olds have a ton of money in their retirement and you’re forecasting that you’ll have nothing? It’s because of this very principle: time. The earlier you start investing, the greater the odds that they turn into millions.

There you are…at the commencement. Annnnd, you’re officially graduated! You throw your cap into the air, find your mom in the crowd and blow her kisses (Dad always gets the shaft…why is that?). You’re on top of the world and your fantastic life is about to start!

…until you realize that you need three years of experience to get a job.

Even though a degree is helpful in finding a job, the proof, as they say, is in the pudding. Employers want to know that you’re going to work hard and actually help their company succeed. Your 3.62 GPA doesn’t tell them nearly as much as the applicant that has worked two other jobs in the exact same field and has glowing performance reviews from each.

When you go to college to get that degree, you’re delaying your experience in the workforce. This of course means that it could be tough to get hired, and you’ll likely still start in an entry-level position.

At this point, the high-school grad has already been proving themselves for four years and might even be a couple levels above you on the totem pole.

Does Junior really need to go to college? Her experience might be enough!

If your kid knows he wants to be a mechanical engineer and wants to solve physics problems day in and day out, then by all means, send that kid to college! But, if your child has absolutely no clue what he wants to do with his life, then maybe you shouldn’t push him so hard to get his college degree.

After all, you might just be pressuring him to take on mountains of debt, lost income, reduced investment returns, and a “valuable” degree that he’ll never use.

There’s no shame in ditching college. Many an individual have proven themselves without it, and plenty more will do the same even today.

Be honest with yourself. Does your child need to go to college? Or are you pushing them into a nightmare?