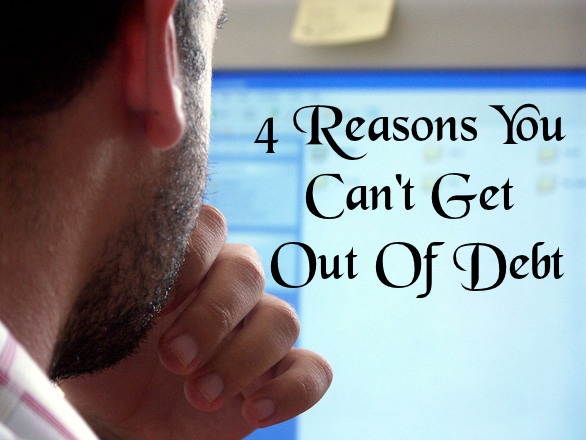 There are reasons you can’t get out of debt.  Let’s find them and learn how to hurdle the problems.

This is a guest post, written by Jamie Jeffers – Enjoy!

Oh.  Sure, I knew we were in debt.  I just hadn’t actually added up all the numbers before.  And the digits staring me back in the face were much higher than I’d expected.

In fact, the number was kind of overwhelming.  It would have been easier to shut the laptop and curl up on the couch with a cold drink and a baseball game than to face facts.  And I nearly did that.

But then I realized that the long list of things I’d like to do was stifled precisely because of that debt number. Everything I wanted the most was on the other side of that figure.

And then I knew that it was time to get serious about paying off debt.

4 Reasons You Can’t Get Out of Debt

It’s not that I’d never tried to get out of debt before.  Quite the opposite.  It had been on our family list of new year’s resolutions for years.  I mean, it was buried under other, more fun things to think about…but it was written there.

Here’s how we decided to un-bury those words and move them to the top of our priority list.  And if you’ve been spinning your wheels on debt payments for years, there are reasons you can’t get out of debt.

How can you possibly expect to get out of debt if you aren’t willing to make changes?  It’s going to take sacrifice.  And those things that you have the tightest grip on are probably the biggest offenders.

In fact, the more you find yourself defending a decision, the more you really should look at it.  If you have to be that defensive about it, you probably already know that it needs to change.

What habits got you this deep into debt?  For us, it started by buying a house that had a ton of hidden costs we weren’t aware of.  But it spiraled into bad money decisions from there.

Are you paying for cable, new cars, too much house, buying “gotta have” items, keeping languishing memberships? What are the habits that are costing you far more to own than they ever give back? Don’t go on a massive life overhaul. (Unless you’re the type of person who thrives in those conditions.)  Most of us will get overwhelmed and give up faster than we started.

Choose the biggest offender and change that habit first.  For us, that meant wasteful daily spending had to go.

Are you still using credit on a regular basis?  If you pay on your cards, but then charge more with the next “emergency”, you’ll never get out of debt.

We can justify every purchase we make.  Everything is important.

Make a pledge that you won’t use credit for anything.  Have a small emergency fund at the ready for things that really do count (i.e. actual, real emergencies like health problems or a car wreck).  In those cases, use your cash fund rather than credit.

If you can’t pay with cash, skip it.

Debt doesn’t need a special occasion.  It isn’t special.  Waiting to pay it off is like waiting to put out a fire because the timing doesn’t feel right.

I’m not saying you don’t have important things happening in your life.  But each passing day, you send the bank another “Thank You” card in the form of a payment.

Why wait?  Send them extra money often.  The sooner you can send those little payments to your own bank account, the better.

4) You Don’t Really Want It

What?  Who in their right mind wants to stay in debt?

Well, maybe you.  If you haven’t decided to make changes, stop using credit, and do it now, then you don’t want to get out of debt.

Sure, it’s a goal that you’d like to get to “someday”.  But if you’re expecting a winning lottery ticket or a bonus to pay off debt, you don’t have the mindset it takes.

And honestly, what if you were to get lucky enough to pay off debt the easy way?  What are the odds you’ll make lasting changes and not fall right back into debt again?

The hard road seems tedious, but you’re better off taking it.  When you see how tough it is to dig out of debt, you’ll develop an allergy to letting it happen again.

Avoid these reasons to get out of debt and reap the rewards.

These days, I open my laptop because I love the numbers I’m seeing.  They’re still higher than I’d like, but I enjoy seeing them shrink every month.  Some day soon the numbers will disappear, and I’ll curl up to watch a Reds game… guilt free.

Why aren’t you out of debt yet?