10 Habits of the Rich You Need to Start…NOW! 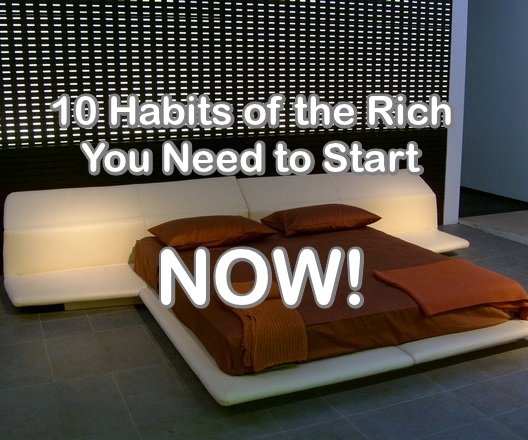 Do you want to be rich? Duh…Don’t we all? If you had the choice between earning $25,000 a year or $150,000, which would you choose? I think all of us would choose the later, hands down every time. The real question is, how do we get there? How do we become rich?

The answer is quite simple actually. I mean think about it. If you wanted to be an amazing athlete…let’s say, a basketball player. What would you do? Play basketball once a month and hope for the best?….No (this is, by the way, is how people in our culture try to attain wealth – by doing nothing and assuming they’ll get everything they don’t really deserve). Instead, you’d probably learn everything you could about the greatest basketball players of our time from every resource possible. And then do exactly what they did to get to where they are, and maybe even bump it up a notch just to be safe.

So if you want to be wealthy, what should you do? The answer is elementary – study the rich and do exactly what they did!

10 Habits of the Rich You Need to Start…NOW!

What is it that wealthy people do? What actions do they form into everyday habits? Follow these habits, make them your own, and you will certainly increase your chances of becoming wealthy.

Why is it that almost every successful person you talk to is a morning person? They read, meditate, and exercise, all before the rest of us even consider peeling back our warm covers in the morning.

Waking up early gives them control. With no one around, they do what they want, and what they want is to be successful. In those early morning hours they tackle anything that might just make a difference in life. Night owls, on the other hand, typically watch TV…which leads us to our next point.

According to Business Insider, rich people have one common thing by the side of their bed. It’s not an iPhone, an iPad, or a TV….

It’s books. They read a crazy number of books.

And not fictional books for their entertainment. They read for knowledge and growth. On average, the rich read some form of non-fiction every single day.

One of the best habits of the rich that you should start immediately? Read – a ton. Read to help your career, your side business, your relationships, your wealth building. If you can’t resist the TV, sell it. It’s just making you broke anyway. 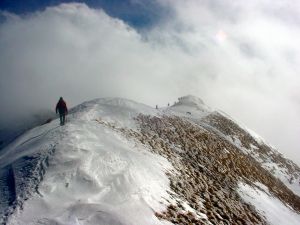 3) They Set Goals and Visualize

I once asked my broke friend, “What are your plans for the next five years?” To which he responded, “We kind of just go where the wind blows us.” He thought his whimsical answer would impress me. Instead, I think my jaw dropped to the floor and my eyes bugged out of their sockets in shock.

He had no goals – no vision for the future. It was the first time I realized that I would be wealthy, and he would be broke for life.

Broke people spend more time their planning vacations than they do planning their own lives. Rich people have a plan for the future….and the future’s future (ie. they plan decades in advance). Want to emulate the habits of the rich? Start by understanding what you want out of this life, then set up some goals that will get you there.

4) They Prioritize Each Day

Once the rich establish their goals and set a date to them, they gain an understanding of what they’ll need to do each day to get themselves there. Rich people write out small goals for themselves each and every day. They get things done, cross items off the list, and go to bed happy knowing that they’re that much closer to victory.

5) They Manage Their Money

Everyone thinks that rich people have money because it was given to them. And then they simply earn more money with the money they already had.

80% of today’s millionaires are self-made and never inherited a cent of it.

So how did they earn their millions? Ummm, let see…they worked – either in their own business or as an employee – and saved a crap-ton of it for investing. After investing for 40+ years, they *magically* became millionaires.

Broke people tend to back themselves into a dark corner with the theory of, “If hardly anyone knows who I am, then I won’t get fired.” The rich have an entirely different mentality. Since they know that they’re already killing it at the workplace, there’s no fear of getting let go. Instead of hiding in the dark, they want all the powerhouses to know their name and to understand their potential!

So what’s the best way to network in this day and age?

The introverts will gravitate to LinkedIn and connect with their start superiors there, but this will only get them so far. To properly network and become rich in the process, one must have something interesting to talk about. According to HBR, when you become a connoisseur of something your networking capabilities soar. Do something that interests you outside of work. Then, feel free to talk about it. Simple as that.

Of all the habits of the rich that you need to start now, I’d say this is the least explored, but highly important.

Kids today are thrown into school at an extremely young age. Instead of starting school as a five year old, many first-time students are four – even three – years old. Many believe this is putting their kids on the fast track.

Not the case, at least according to the studies by Stephen Camarata of Vanderbilt.

In order for kids to become successful later in life, they need to be allowed to think critically – all on their own, not taught rigid facts day in and day out.

Instead of becoming the next best robot of a human, rich people learn to challenge and question themselves constantly. There is hardly ever an absolute. In fact, the only absolute is change.

The polls are in and it’s official. Rich people exercise daily. 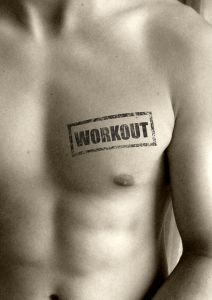 Exercise does three things for a person, it:

People that exercise daily often become more successful later in life – partially because exercise is good for you and improves your productivity, but also because those that have the willpower to stick with it carry that same temperament into their work.

Eating healthy is really just an extension of exercising. Those that exercise typically eat healthy as well.

If you want to become rich in this lifetime, you probably won’t get there by eating a Big Mac every single day. In fact, that just might kill you while you’re still in your 20’s. Eat the foods that nourish your body so that your mind can remain clear and active to solve those problems of the world.

In order to be wealthy today, you have to know a little something about money – mainly, that it should be saved early and given a chance to grow. That’s it.

The rich could care less about that single stock that earned you 200% on your investment. In fact, they’ll probably be nervous for your future because they know that with every high-risk win, there are 9 other high-risk losses.

They would likely also give you a blank stare if you started talking about forex trading. It’s simply too volatile, too risky, and too time consuming.

The rich focus on growing their income streams and keep their investments simple (with investment brokers like Wealthsimple). It’s typically mutual funds and real estate for them! Nothing fancy, nothing complicated, just good old fashioned money-making machines.

Your Habits – Your Action

1) Check off all the items that you do well. These are not hindering you from becoming wealthy, so ignore them for now.

2) Learn more about the habit. Let’s say you’re weak in your health. Which foods are good for your body and will help you prosper with your work? Which ones are overly processed and will immediately be transformed to fat? Use the links in the appropriate category above to start your learning journey.

3) Commit to a small change (big changes never last – eat that elephant just one bite at a time). Instead of going out to eat three times a week, commit to eating out just twice a week. If you’re weak in your exercise, just commit to taking a couple of walks a day.

This getting rich thing isn’t all that complicated. You just need to be intentional about it. Starting nailing down each one of these habits, and you’ll soon be rich yourself!

How are you doing on YOUR habits?

Battle of the Mind Make Money