How Side Hustles Allowed Me to Quit the Rat Race 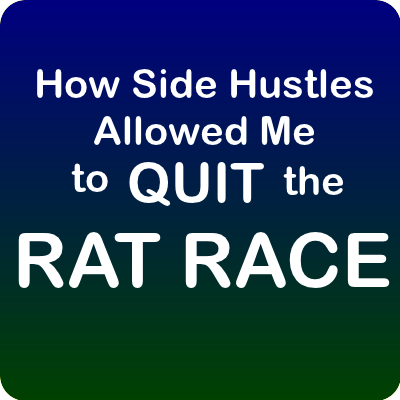 I’m sure that you’ve had the thought. On the drive in to work on a cold Monday morning after scraping ice off your windshield, you dream about quitting your job and doing something else. Something that allows you more freedom to live life as you want to.

This is a guest post written by Jon from Money Smart Guides, a personal finance blog that helps readers build wealth and invest for their future.

I was in your shoes. Back in 2010 I was as low as you could go. I hated my job. In fact, I don’t even think the word hate describes just how much I disliked my job. I used up all of my paid vacation and wished I could buy more. I even considered taking unpaid days off. Being miserable for the rest of my life was not an option I wanted to pursue.

It was at that time I started blogging on the side. I had no dream of making this my career or anything like that. I was just hoping to make some extra money from it. This money, along with money from other side hustles, would be used to allow me to one day retire early.

Related: How to Start a WordPress Blog on iPage For Just $24

The goal was to quit the rat race by 50. That meant 20 more years of getting up to an alarm. While I didn’t envision working the same job I hated so much for the next 20 years, I still saw myself working somewhere for that length of time.

Fast forward 3 years, and I get called into my boss’s office. I had been working at a new company for just over 2 years. I was doing great. Everyone raved about how good of a job I was doing. While I wasn’t excited to wake up to an alarm, it was much more bearable than my previous job.

I walked into the room, sat down, and was told I was getting laid off. The company no longer needed my help. I was still a great worker. They just had no use for me. Talk about a shock to the system.

I packed up my things and drove home. It was 11am. Because I was in shock, I really wasn’t feeling any emotions. I called my fiancé and told her the news. I told her the good news was that if we wanted to stay a little longer on our destination wedding next month, we could because I didn’t have to be back!

That afternoon I went and played golf. It helped me to think and process what had happened. Over the next few days and weeks, I did a lot of thinking and analyzing our budget. I realized that my side hustles would allow me to not retire at 50, but quit the rat race now.

So how did I get to the point where I was able to quit the rat race early? What were all of the side hustles I was doing to get me to where I was? We have to go back to college, as that is where it all began.

The Start of My Side Hustle Journey

It was junior year and my roommate and I wanted some more money. At the time, eBay was new and you could sell anything for a profit. I know because I sold a crisp $5 dollar bill for $8. True story.

My roommate and I ended up hitting yard sales and estate sales. We picked up anything we thought was of value and resold it online. We were making around $250 a month.

From there, we turned to music. This was right before Napster came along and blew everything up. We would sign up for BMG music and Columbia House to get 12 CD’s for $0.01. We’d buy whatever was hot at the time and sell the CD’s for $10 each. Then we’d wait for their good sales, stock up and repeat. (We may have even signed up multiple times using different names to really profit.)

While the yard sale side of eBay carried on, the music side quickly dried up when mp3’s came along.

Of course, side hustling didn’t stop there. After college, I continued to use eBay to my advantage. I began to incorporate other hustles into the mix as well. Here is a short list.

Then of course there was blogging. I make money through blogging through selling advertising and by recommending great products I use.

Thanks to the internet, there are countless ways to make extra money. I’m even finding new ways myself.

My Side Hustle Income

As I mentioned before, my goal was to retire early with this money I was making. Whatever I made, I would transfer to a dedicated online savings account. At the end of the year, I would invest it in the stock market so it could grow and one day allow me to retire at 50.

But that didn’t happen. Instead of waiting until 50, I used this money to help me cover expenses while I tried to blog full time and turn this side hustle into a main income source at age 35. Three years later and things are still going well.

My income has been doubling each year and I see it doing the same this year as well. Will I ever go back to working for someone else? I don’t know. I don’t consider myself retired at this point as I still have to work to earn an income. If I could forget about blogging or just do it part time and still earn enough to pay the bills, then I would consider myself retired.

Maybe money is tight right now. Maybe you just want to save more money. Doing a couple side hustles can help you get to where you want to be financially. You just have to make sure you save the money you earn!

Whatever your goal is for your side hustle income, remember that life happens. Nothing goes as planned. My plan was to retire at 50 and to many, they consider me retired at 38 because I don’t have to be anywhere during the workweek. I answer to myself.

I call it self-employed, but they can stick with their opinion. Just as my side hustle income allowed me to quit the rat race much earlier than planned, I know that life happens. I might end up getting a real job one day again. I am OK with this.

Don’t think making money on the side is impossible or hard. It is very possible and it is fun. I never feel like making money through a side hustle is work. It is a lot of fun and that motivates me to keep doing it.

You can do it too, you just have to take the first step and find something you enjoy doing that can bring in some money on the side. Good luck!

Money Start Your Own Blog