3 Ways to Increase Your Chances of Getting Promoted 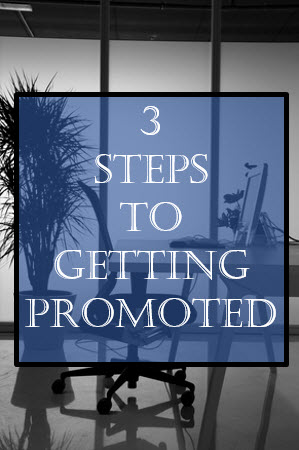 While a lot of the common financial advice out there for earning more money points toward starting a side hustle, it’s not the best solution for everyone.

In fact, in some cases, it could be far easier to earn more money in the form of getting promoted at your job it is to start a business. Because, quite frankly, starting and running a business is the furthest thing from easy.

3 Steps Toward Getting Promoted

With that being said, there are certain things you can do to increase your chances of getting promoted.

One of the biggest mistakes employees make is assuming they are going to get a promotion. They think that if they just work really hard someone will notice and offer to give them more money.

Yeah…that’s not usually how it works.

The reality is, in most cases, no one is going to give you more money unless you ask for it. This is true in business and it’s true when you’re regularly employed as well.

2) Find quantitative examples of how you’ve helped the company.

Back in my recruiting days, I spent a lot of time fixing resumes and coaching people on how to kill it in a job interview.

One thing we would usually have to do is find quantitative examples of how candidates had improved things for their last employer. Did they exceed sales goals? If so, by how much? Did they increase the output of a team they managed? Have they saved the company money? Did they land a huge deal?

We would look for any possible example of success that could be shown with numbers or concrete examples. Reason being that most candidates would simply describe what they did at their job, not what they accomplished at their job. Employers care far more about the latter.
The same concept can apply when getting promoted. Don’t just barge into your boss’ office and ask for more money. You have to come prepared with concrete examples of why you deserve it.

This means you should probably plan to ask for a promotion and then spend some time leading up to that collecting data.

3) Learn the art of good timing.

A big reason why employees get turned down for promotions is because they ask at the wrong time.

For example, good luck getting promoted during a huge merger when there’s a ton of uncertainty in the air. You probably also won’t be getting promoted when everyone is trying to meet a huge deadline.

Granted, there is no perfect time to ask for a promotion, but there are definitely times when it’s less likely you’ll get what you ask for.

Is It Time For Your Promotion?

So what about you? Will you be asking for a promotion any time soon? Use the methods above and gather up all the reasons why you think you deserve the improved title and increase in pay. And then, let us know when you land the deal!

When will you be asking for your next promotion? And why do you think you deserve it?