Do You Have a Spending Problem or an Earning Problem? 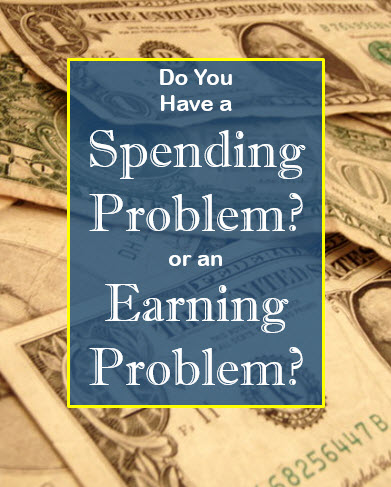 When you look at most financial advice online, they tend to cater it to people who have a spending problem.

Given the statistics that come out about our lack of savings as a whole, it’s easy to assume that most of us are spending too much money. Not to mention that, culturally speaking, we tend to partake in consumerism.

However, as I’ve come to learn through my own financial journey, financial issues aren’t always because of a spending problem. Sometimes, it’s actually an earning problem.

This post was written by Amanda Abella, an expert writer and speaker in personal finance.

The Moment I Realized I Had an Earning Problem

I’ve spent the better part of a decade teaching myself personal finance. Like I already mentioned, most of it is catered to people who overspend, don’t have savings and don’t have money to invest.

Fast forward a few years and I am no longer one of those people, yet I was still having issues reaching my financial goals. That’s when I realized what I really had was an earning problem. It was earning that was really going to move the needle for me, not finding ways to cut in my already drastically cheap life.

Here are a couple of questions you can ask yourself to determine whether you have a spending problem or an earning problem.

Have you already cut your expenses as much as you can?

Here’s the issue I have with the extreme frugality movement. There’s really only so much you can cut down on expenses before your quality of life starts to suffer.

Even if your quality of life is still okay, there’s only so much you can do as far as not spending money. You eventually get to a point where your expenses are as low as they can go. At this point, saving on a $4 latte isn’t really going to do much to really make a difference.

If you’ve already reached this point and you’re still not making much headway toward your financial goals, then you probably have an earning problem.

Do you feel overworked for little return?

I consider myself a recovering under-earner. This means I’m someone who is healing from not earning money to my fullest potential. I’ve made a lot of progress in this area of my life, but I still have to keep it in check.

One of the ways I realized that I had an earning problem was when I started to feel frustrated and overworked without much to show for it. I noticed I was still giving away too much of my time for free, I was still hesitant to outsource, I’d been procrastinating on creating digital products because of perfectionism and I hadn’t revised my coaching and consulting packages.

That’s the stuff that’s moving the needle, not cutting more.

Money management is a two-pronged approach. You need to stop spending unnecessarily but you also need to find ways to earn more. Once you start implementing the two on a regular basis, then you’re able to make real progress.