How to Get Completely Debt Free by 30 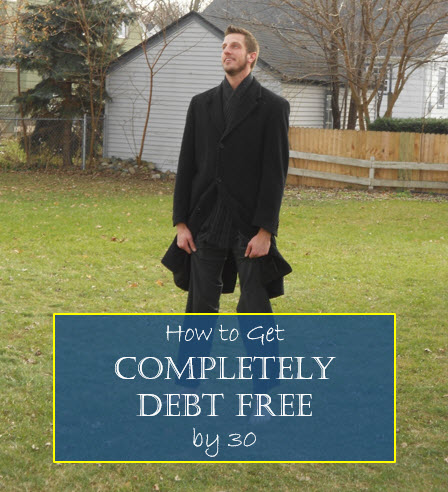 I graduated from college at the age of 23 and was worth -$10,000. Over the next 7 years, I married, divorced, remarried, and still came out completely debt free (including the house) by the time I turned 30.

How the heck did I do that?

How to Get Completely Debt Free by 30

I honestly didn’t think I was doing anything that spectacular at the time. Sure, I was a little more aggressive than most, but was I super-human in my efforts to pay off my student loans, my credit cards, and my house? Nope. Absolutely anyone could have done what I did over those seven years.

Looking back, I attribute my financial success to the following reasons – all of which you can implement and use for your success as well!

Everything was new. We just recently graduated, found an apartment, and were living on our own for the first time. Roughly three months in, I sat down to figure out how we’d been doing financially….and quickly realized that we were consistently spending $200 more than we earned each month. We were going backwards.

It wasn’t two minutes later that my wife walked in the door with that fateful envelop in her hand…from Direct Loans. It was time to pay back our student loans.

Put simply, I was terrified.

We were already going backwards each month. How on earth were we going to make additional student loan payments?!

That fear led to action. We cut back on expenses, worked more hours, and were actually able to move the needle in the right direction.

Lesson #1: Want to be completely debt free? Stop ignoring where you are financially. Sure, you might like being blissfully ignorant, but that’s not going to keep you from retiring broke and surviving on Alpo and canned tuna.

My wife of three years decided one day that she didn’t love me anymore and wanted out. Oh, and she wanted to take half of our net worth with her…$22,000.

You know how fear fueled action in the first phase of my life? Well now it was anger.

And that’s exactly what I did.

Lesson #2: Want to be completely debt free? Get angry at your debt. Is it killing your freedom? Your relationship? Is it keeping you from living the carefree life that you’ve always dreamed of? Get mad, pay it off, and get it over with.

I continued to live simply. I mowed more lawns, wrote more articles, and even made some money online. In the summertime, I saved another few hundred bucks by riding my bike everywhere, and I mean EVERYWHERE. If the destination was within 20 miles, I was on my bike.

Lesson #3: Want to be completely debt free? Get focused and get intense. Set a goal, write it down and stare at it every. single. day. When you ask, “How can I..?” each day, your brain will figure it out. Trust me.

4) I Ignored the Nay-Sayers

When you work to pay off credit cards, not too many people will get in your way. We can pretty much all agree that credit card debt is stupid. But when you start tackling the home mortgage with a vengeance, be ready for the crazy stares. People won’t understand you – and they might even confront you – but ignore them as best you can.

a) On average, investing has earned people between 7-8% a year….but that’s the average. Sometimes you’ll earn 15%. Other times you’ll earn -10%. So sure, you’re more likely to earn 7%, but there’s no guarantee. There’s risk in every investment. You want to know how you can earn 4-5% returns with absolutely no risk? Pay off your house.

b) When I went through my divorce, I grew a hatred for debt. I hated the effect it had on me, and I despised what it did to my relationship. I wanted it out of my life forever. Through this anger I was able to pay off $54,000 worth of debt in a single year. If I would have decided to invest instead, do you think I would have contributed the same $54,000? Not even close.

At most, I probably would have put $10,000 toward my investments because the same emotion wouldn’t have been there (I mean think about it. Have you ever seen anyone taking on extra jobs and clawing their way toward investing $50,000 a year? Never. It just doesn’t happen). So let’s say I would have earned 10% on my investment during that year vs. the 4% that I earned by paying the debt off early.

The result speaks for itself…

Lesson #4: Stop listening to the math nerds of this world. They are great with numbers, but don’t understand emotion at all. By tackling your house debt, you can absolutely earn more.

You read this article because you’ve absolutely thought about it. You’re toying with the idea of being completely debt free. And you know my take on it already – go for it. I’ve never regretted it for a second.

When I paid off my house and got rid of my mortgage payment, I discovered that my monthly bills typically totaled just $460 a month. Do you know how fast you can build wealth when your monthly cost of living is less than $500 a month??

Since that mortgage payoff date two years ago, my new wife (a much better choice this time by the way) and I have been able to increase our net worth by over $200,000! We did this with rental properties, side income, and NO DEBT!

It’s your turn. Stop taking advice from your broke friends about how to become wealthy. They have absolutely no idea. That’s exactly why they’re broke.

Want to grow wealth faster than you ever thought possible? Get out of consumer debt, pay off your house, and then invest like crazy.

Want to be completely debt free by 30? The method is simple. Get started today!

Battle of the Mind Get Out of Debt Money Mortgage Payoff