What’s Your Best Get Out of Debt Mobile? 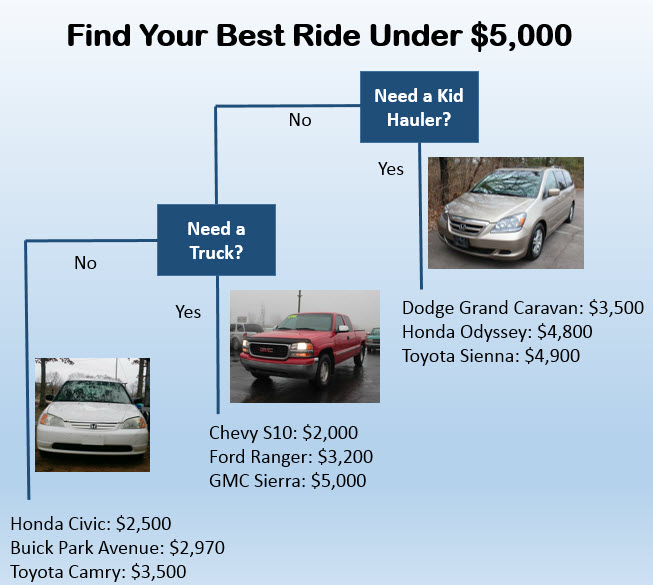 In reality, they’re all saying the same thing. And it’s:

The Curse of the Car Loan

We actually touched a little bit on this yesterday (“What is Your Net Worth, and Which Way is it Moving?“). Cars go down in value so fast that it’s actually hard to save money faster than they depreciate. I call it a silent killer because you don’t actually see the money flying off your car. It’s done silently and unassumingly, but it definitely happens. And if you own a $40,000 car, it happens at about the rate of $6,000 per year.

Just think. Your net worth is $20,000 today and you drive a $40,000 car (the whole things is on a loan). If you save up zero dollars between now and next year, your net worth will actually tumble to $14,000. This is the effect of the silent killer, and it’s why I still drive vehicles that cost $5,000 or less. They still look decent, they’re almost fully depreciated, and my net worth will continue to soar.

Let’s get over this major myth about a $5,000 car leaving you by the side of the road everywhere you go. Just because a car costs only $5,000 does NOT mean it’s a piece of crap.

When I was getting myself out of debt a few years ago, I sold my expensive-to-fix Nissan Altima and bought a cheap $2,500 Honda Civic with 191,000 miles. To this day it has been the absolute best car that I’ve ever owned. I put 40,000 miles on it, got an average of 37 miles per gallon, and only had two minor repair issues over the course of 3 years (none of which left me by the side of the road). It was simply fantastic.

If you want to get out of debt and actually grow your net worth for a change, you’ll have to get over yourself and downgrade your ride. I strongly suggest it to everyone I meet.

What’s the Best Car for You to Get Out of Debt?

I get asked this question a lot. When people finally come around to getting rid of their expensive car, they ask for my advice on what their get out of debt mobile should be. What is inexpensive, but will still be dependable for them on a day to day basis? As the son of a car dealer, the answer comes pretty easily to me. And in fact, I decided to diagram it for you.

Do you need to haul kids around?

Then I suggest a Honda or Toyota minivan (and if you can’t afford them…then the lesser expensive, but less reliable, Dodge Grand Caravan). Don’t want a minivan? Tough. Suburbans and Yukons are too expensive for you. The minivan is practical, dependable, and cheap. It’s definitely your next get out of debt mobile.

Are you in the market for a truck?

There are some great options that don’t cost $30,000 out there on the used market. My first picks would be a Chevy S10 or a Ford Ranger. They’re small so they get good gas mileage, and they’re fairly dependable – and if they do break down they’re actually pretty cheap to fix! Need a full size truck? I recommend the GMC Sierra. To be honest with you, it’s going to be tough to find one without rust (they’re known for it around the wheel wells and underneath the cab), but the motors will run forever.

Don’t need a truck or van?

Then it’s time for you to get some awesome gas mileage in the Honda Civic (I obviously recommend it). Think it’s too small for you? Well….I’m 6’8″ and it fit me fine, so I don’t think you’ve got an excuse. If you can’t find a decent Civic, then take a look at a Buick Park Avenue or Toyota Camry. They’re awesome runners as well.

Your Get Out of Debt Mobile – It’s Only Temporary

I know I know. Driving a $5,000 (or less) car won’t necessarily be the time of your life, but it’s only temporary. If you buckle down and tackle your debt, you can likely get rid of all of it (outside of your home mortgage) within just two years. Out of your 100 year life, that’s just a drop in the bucket. And then after the debt is gone, you can upgrade a bit if you want – maybe to a $10,000 car.

Ten years later, once you’re a millionaire (you’ll be surprised how quickly it can happen when you have no debt), you can buy whatever car you want. You’ve lived like no one else, so now you can live like no one else.

Are you driving your get out of debt mobile? If not, will you soon? Which one?