The #Hashtag That Inspired Us to Pay Down Thousands in Debt 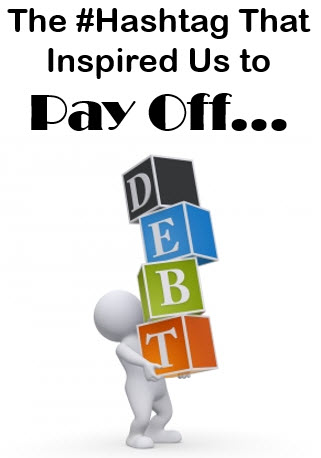 This inspiring post was written by Jamie Jeffers, one of our very talented staff writers! Enjoy!

The day my husband and I sat down to form our goals for the next year or two ended much differently than I could have expected.  You see, we have this meeting every year in early January, and I was excited to talk about the things we could accomplish this year.

My husband had a pretty good job and was starting to make a little more money.  That seemed like the perfect opportunity to do some of the things we’ve always wanted to do.

There was just one problem.  A bigger problem than I even realized at the time.  It’s called debt.

We both knew we were in debt.  In fact, “pay off debt” had made our goals list every year for several years in a row.  The funny thing is that it never seemed to happen.

The Hashtag That Inspired Us to Pay Down Thousands in Debt

It was another item on a long list of things we wanted to get done.  But it was this particular year when it hit me that our debt was too big to ignore anymore.  It would never be gone from our lives if we continued to consider it another part of our to do list.

Slowly, my husband and I looked back at the list of hopes we’d just written for the year.  And suddenly, both of us came to the realization that we were going to have to scratch out most of that list.

We saved a few things that couldn’t be put off anymore.  The kids needed to learn how to swim (a safety issue).  And the small bathroom renovation we’d started had to be finished.  But most of the ideas would hit the chopping block.

After the list was hacked to bits, hubby put a new title on the page.  He called it the #yearofno.  Little did he know what he’d just started.

How We Adjusted to Our #YearofNo

The next day, we called a family meeting to introduce our #yearofno.  At the time our kids were 12, 10, 8, 6, and 2.  We explained (in kid language) that we had been spending too much money lately.  There would be some changes in our family.

The kids learned that book orders and extra treats at school were also axed.  Amazingly, they adjusted.  Who knew you could tell kids no?  (Just kidding!)

While our debt isn’t our kids fault, we wanted them to learn that actions have consequences.  When they complained about it, we’d find an age appropriate way to associate that uncomfortable feeling with credit card debt.  Much better that they learn from our mistakes than later make their own.

Incidentally, I asked the kids at the end of the year what they thought of our #yearofno.  A couple of them were ambivalent.  The other two said they hated it…but when I pressed them, they couldn’t come up with any specific thing that they missed.  Couldn’t have been too bad!

That nasty fast food habit that we’d developed was the first thing up on the #yearofno chopping block.  That was probably the thing the kids noticed the most.  Until then, not only were we hitting the drive thru on a regular basis, but we’d also been ordering pizza a couple of times per month.

Talk about a lifestyle change!  Fast food is addicting, and it was hard to drive past those arches when we were craving some fries.  Our family is always on the go, so I had to find other ways to keep hunger at bay.

My best tip for that is to keep a cooler full of water bottles at all times.  Then you can add some ice on the way out the door.  Much faster and cheaper than stopping for drinks!  A box of granola bars can handle sitting in the car through nearly any weather.  (Avoid chocolate in the summer!)

Meanwhile, my husband and I bore most of the brunt of our #yearofno.  We skipped gifts for each other on birthdays and Mother’s/Father’s Day.  We didn’t buy clothes or shoes until we couldn’t avoid it anymore.  Snacks and other extras went by the wayside.  It was time to pay down thousands in debt, no matter what!

We made excuses for not going out with friends and coworkers over and over.  (It’s nice when you have friends that understand your situation!)

The #yearofno was a hard adjustment.  The early months were tough, but the exhilaration of making a permanent change in our lives got us through.  Some months we stumbled more than others.

Our main goal for that year was to pay off one monster of a credit card bill.  We owed several different cards, but I wouldn’t let us be overwhelmed by all of that.  So we focused on one card.

You can break down the math and aim for pay off 8.33% of your bill every month.  But that doesn’t mean life will cooperate!  We had our good months and our bad months.  But in the end, the good months got us pretty close to the finish line.

Our debt free journey isn’t over yet.  We still have two smaller cards to tackle before we’re done.  But hitting this goal that seemed so looming and large has given us the motivation we need to keep on going.

And this year, when we sat down to make our goals, we had just one thing in mind.  Finish off that debt.  With a new motto we call #PressOn.

Have you ever used a motivation like this to pay down thousands in debt?