The Unbelievable Power of Belief 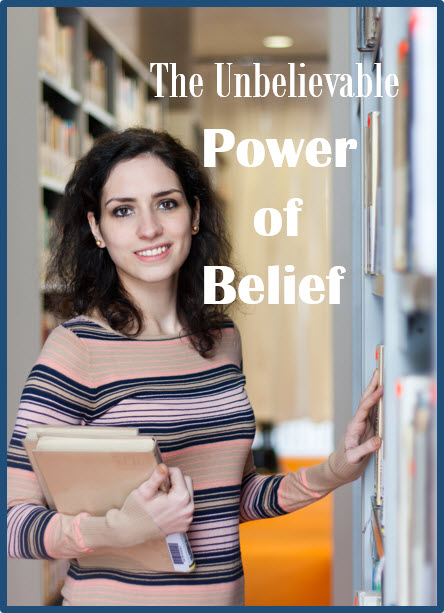 I was 19 years old bowling with friends when one of them asked, “How much money would it take for you to walk up to a complete stranger and stick your tongue in their ear?” (FYI…this is the G rated version of the actual question…but there’s no need to go into the embarrassing details of my childhood, right…?). It was definitely a strange question, but I had no idea how profound it really was until many years later…

The Unbelievable Power of Belief

To me, the question wasn’t so much about “How gross would it be?” or “How much trouble could this get me into?”. Since I wouldn’t want to stick my tongue in someone else’s ear in a million years, I thought about the question like this, “How much money do I think I can earn in my lifetime?”…because that’s what it was going to take for me to do this.

One of my friends piped up fairly quickly and said, “Seventy-five thousand dollars.”

I figured that’s about the amount I could earn in my working lifetime if I invested properly. So if someone were to pay me to stick my tongue in a stranger’s ear, that’s what it was going to take.

Fast-forward a decade plus a couple years and I began to understand why this odd-ball question was so profound, and how our answers were a direct foreshadowing of our future.

Three of us answered the question:

And guess how well each of us is doing financially, twelve years later?

The point here isn’t that I’m doing the best out of all my friends (after all, the financial measure is only one of many), it’s that we all became what we believed we could be.

The low dollar amount responder didn’t have much confidence in his earning power then, and is still struggling to believe in himself today. The mid-range friend answered with a slightly higher number, but it’s still fairly low compared to what an average person can earn during their lifetime.

Both of their attitudes today are incredibly correlated to their responses from twelve years ago. This just goes to show you that our success in this world has everything to do with the unbelievable power of belief.

There are two types of mindsets in this world:

My two friends had a fixed mindset. They weren’t that great in school, so they figured that they were destined for mediocrity when they entered the workforce. In other words, once a dummy always a dummy.

I believed in the growth mindset. Sure, something may have been difficult for me then, but I believed that with constant learning and application I could improve and work my way up the ladder. My success was not limited by my current understanding. It was only limited by my belief in myself.

Earl Nightingale put it this way – “We become what we think about.” In other words, if we believe in ourselves and constantly picture ourselves as a success, then we’ll become a success.

It’s Time to Start Believing in Yourself

What if you believed that failure was impossible? What do you believe you could do?

According to a fantastic article by LifeHack, when you believe in yourself, you:

By constantly believing in yourself, you’ll naturally forget about all your past mistakes. Your pressing fears will instead just become a passing twinge of discomfort. And where you may have dreaded self-promotion, you’ll soon grow a love of talking to others and letting them know how you can help them.

It doesn’t happen overnight. Confidence and self-belief can sometimes take decades to acquire. That’s why it’s so important to get started today.

Here’s a few names to search to get you started:

Will you unleash the unbelievable power of belief?