4 Reasons Millionaires Are Not The Scum of the Earth 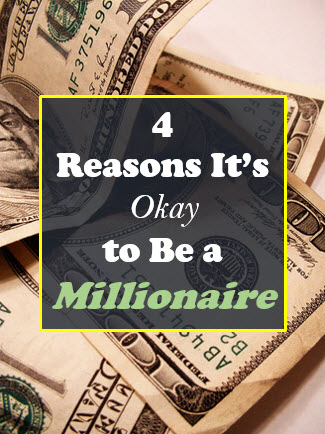 Here is society’s view on the rich and the poor:

…My face is getting red just writing out those statements. Each one of them just seems so ridiculous to me that it becomes almost unfathomable that this is now our nation’s typical line of thinking.

If I were given the chance to change the statements above (and I will…since after all, this is my website), I would have them read this way:

4 Reasons It’s Okay to Be a Millionaire

According to Credit Suisse, there are 15 million millionaires in the United States today, which equates to roughly 6.4% of the population. That’s a ton of wealthy people!

How is it though, that so many people can be millionaires in this world? I mean, only the rich bloodlines, the celebrities, and Silicon Valley folks can become millionaires, right?

Those are just the everyday lies that the media is selling you – the the rich are scum, the poor are mistreated, and the government is the solution to all of our problems. And let me remind you one more time that all of this is absolute crap.

Contrary to popular belief, it’s absolutely okay to be a millionaire in this messed up society. Some people might think you’re evil – they might spit on your BMW, they might call you names, and they may even try to guilt you into giving all your money away….

Here’s are four reasons why I believe it’s okay to be a millionaire:

Only 20% of the wealthy have inherited their income. The great majority of the population has worked hard and earned their millionaire status with their blood sweat and tears.

When you started your working career, you could have decided to hang back, relax, and do the minimum. But you didn’t. Instead, you sacrificed your time, your mind, and your body over the last 30+ years to develop your wealth. Nobody gave you a free ticket. You earned it, and you should be proud of your millionaire status.

2) You’ve Been Serving People All Your Life

Most millionaires aren’t rich snobs from Wall Street. More often than not, they’re small business owners that serve people directly every.single.day. They fix your leaky pipes, they service your fancy car, and they help you renovate your house from time to time. Millionaires are often simple people that enjoy helping others.

You’ve always had a passion for helping people. It gave you satisfaction, it energized you, and thankfully, it also put money into your pocket. You earned your money fair and square and did it via win-win propositions. Be proud of the people you served. And don’t ever feel sorry for becoming wealthy in the end.

3) You Actually Embraced the Opportunity

Doctors, lawyers, and large business owners definitely have an advantage with their large incomes. But when they buy massive houses, drive foreign luxury cars, and only eat imported gelato (apparently in their minds, ice cream is just crap), there often isn’t much money left to spare. Large income minus large outgo equals nothing.

You’re different. You probably never earned a massive salary, but you still dodged the paycheck-to-paycheck lifestyle. Your mediocre house, your decade old domestic car, and your unimpressive wardrobe all played a part in your millionaire status.

Instead of living large on your hard-earned income, you saved it, invested it, and eventually reaped the rewards of your delayed gratification. It’s absolutely okay to be a millionaire. You’re just one of the few that sacrificed enough to earn it.

The most popular belief from society today revolves around the redistribution of wealth. Put simply, they believe that those that have money should be forced to give it all to those that don’t.

At first read, this makes absolute sense. Wealthy people could easily survive on $5 million instead of $10 million, and this simple action of redistribution could help thousands of people that are trying to scrape by on just $10,000 a year….But then you think about it for another five minutes and realize the next, more resounding issue….

Rich people understand how to earn large sums of money. And they obviously don’t do it by working a job earning $15 an hour… Instead, they do it by building businesses to develop a passive income that they can grow to an infinite size (and thereby produce an infinite income).

In short, the rich have the goose that lays the golden egg (and actually, they created the goose!). The poor only know how to eat the egg. If you give the goose away to the poor, it will be squandered, wasted, and will no longer produce.

Related: How to Grow an Unlimited Income With Your Blog

A Message to the millionaires:

You have a gift. You’ve been given the ability to grow amazingly wealthy. This also means that you have a great responsibility to help those that are not as blessed. Do NOT be guilted into giving away your gift (the goose). Instead, use that gift to bless those that are all around you!

Give to the needy. Set up programs for the underprivileged. Do everything you can to level the playing field. But do NOT subject yourself to the backlash of those that do not understand your gift.

It’s Okay to Be a Millionaire. It’s Time to Embrace It.

Stop shying away in the corner. Don’t hang your head in shame. You’re wealthy – be proud of it! You earned more, saved more, invested more, and sacrificed more than anyone can understand. And now you have the responsibility to make a massive difference! Take up the torch and run with it – for you can make this world a better place.

It’s absolutely okay to be a millionaire. In fact, I encourage it!