The One Secret to Success That I Absolutely Swear By 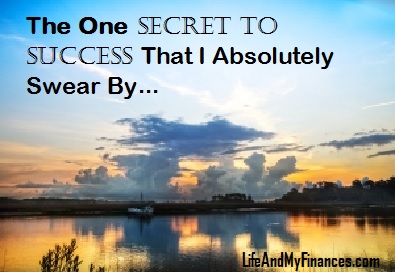 “That’ll be $8 please.” I beamed with pride as I collected the money. That was my third shoe rack sale of the day, which meant nearly $24 of pure profit. Not too shabby for a 12 year old!

The One Secret to Success That I Absolutely Swear By

My Dad worked for a local furniture company. There weren’t a ton of perks, but he DID have the rights to some scrap lumber at the end of the day. Not knowing exactly what he’d do with it, he’d find himself taking a dozen or so plywood scraps home with him each day. And as they began to stack up, I started to see dollar signs!

You see, the scraps were rectangular – approximately 30 inches by 10 inches – and were all exactly the same size. I figured that if I put two boards on the sides, and spaced three from bottom to top in between, I’d end up with a pretty nice shoe rack!

So that’s exactly what I did.

I built one, then two, (then took a break to bandage my thumb….) and then built a third! And, to my delight, each one of them sold at our local flea market, netting me my glorious $24!

From the beginning, I thought I could build a decent shoe rack. Then I actually built them, sold them, and built some more. I created money from a few pieces of scrap lumber, and if I could do that, just think of what I could accomplish next!

The Most Powerful Muscle in Your Body: Your Mind

When it comes to the power of the mind, I believe that Mahatma Ghandi said it best:

And then, more simply put, I keep coming back to the words of Earl Nightingale. The one secret to success that he lived and died by:

“You become what you think about.”

If you think you’ll never amount to anything, then that’s exactly what you’ll become…nothing.

The same mind, the same IQ, the same strengths and weaknesses – all can be equal, but it’s the thoughts and belief that make the absolute difference.

You become what you think about…. yeah right. Sounds like another infomercial is on the way, scheming to sell us on some more self-help products that will get us nowhere.

If this is where your mind is going, I get it. I was once there myself, until I realized that almost every one of my failures or successes were tied directly to my belief. If I thought I would probably fail, I did. If I believed that I would succeed, I kicked butt. What I thought about, I became.

…and then I found the article from Harvard that backed it all up: “Setting Goals: Who, Why, How?”

This study discovered that setting goals, (or being intentional of what you think about):

While no one knows exactly how the mind works, it becomes more and more factual every day. The one secret to success in this life is: we become what we think about.

What Will You Think About?

All these prolific individuals couldn’t help but think about their future success. It was their undeniable passion that drove them to new heights unimaginable by many. They certainly became what they thought about, and we’ll forever remember them for it.

What is it that you think about? If it’s TV shows and drinking games, you’ll get nowhere. If instead, it’s new business ventures and world-changing notions, you’re well on your way to being remembered forever.