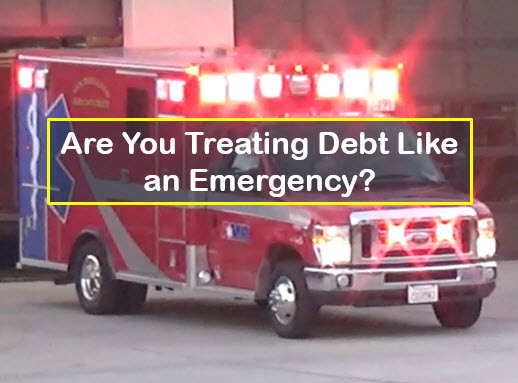 Remember back in college?  It was the first week of school, and you were amazed by your sudden independence.  Just a few months ago you weren’t allowed to chew gum or loiter in the hallways for more than 2 minutes.  But now, your professors weren’t even taking attendance in class!

So when you saw the credit card booth, it was hard to resist.  Getting a credit card is another sign of being an adult.  And you were desperate to prove how grown up you were.  Besides, that towel with the school logo on it was a pretty great bonus.  Who can resist a free gift?!

It probably took months or even years for you to realize the high price of that towel.  Over time, you racked up so much debt that you can barely stand the thought of opening the bills when they come in.  Better to not even know how bad the damage is.

The creditors don’t bother you as long as you make the minimum payments, so you just stick with that.  You can handle that minimum payment for a long time, so why worry about the mound of debt?

Your debt is actually more of an emergency than you think.  Here’s why.

This post was written by our unbelievably talented staff writer, Jamie Jeffers. Give her props in the comment section below!

There’s a reason successful people avoid debt (or at least unsecured debt) like the plague.  The deck is stacked against you.

Let’s look at 3 reasons why you can’t win when you owe money.

Let’s say you have a couch emergency and you can’t resist the random holiday sales event at your local furniture store.  So you pick out your couch, put it on a credit card, and take it home.

You probably have awesome intentions to get it paid off soon.  You can make big payments for a few months, and then you’ll get that bonus and can finish it off.

What you don’t know is that the car is getting ready to break down.  And that bonus is only half what you expected.  It’s not fair, it’s not your fault, but it is life in a nutshell. (Derek’s note – My ex and I did this exact same thing…we bought a $1,700 living room set on credit because we could easily pay it off in a few months…Then she lost her job the next week. Unfortunately, we were NOT treating debt like an emergency)

Suddenly you find yourself making minimum payments on that card.  It’ll take you 94 months and will cost you an additional $1,293.35 in interest.  That’s right, you’ll pay for the couch nearly twice.  And 8 years later, you’ll finally make the last payment on a couch that is now worn and stained.

…and that’s assuming everything goes as planned (which we all know never happens).

The Power Is Not Yours

Interest rates have been stagnant for so many years that it’s easy to forget that the rate you pay on unsecured debt probably fluctuates with interest determined by The Fed.  Unless you have a rate locked in, this can affect your credit cards, home equity lines of credit, and adjustable rate mortgages.

While the Fed tends to raise rates at a slow pace, that doesn’t matter if you don’t have a plan to pay off your debt quickly.  You’ll be paying more with every hike.

If you have an emergency and can’t pay for 60 days or more, the balance will be subject to a jaw dropping penalty rate.

And it isn’t just interest rates.

Creditors love to attach fees to your bill for every little thing.  You do have control over fees you’ve opted into.  (Look at your bill for credit card insurance or other monthly fees that you can cancel.)

Annual fees are an expensive “thanks for letting me stay in debt to your company.”  Sometimes you can call and have them removed, but not every company is willing to work with you.

After all, they have all the power. If you’re not treating debt like an emergency, it can definitely take you down over time.

Money Works Harder Than You

You’ve probably heard the saying “your money can work harder than you can.”  Money doesn’t have thoughts or emotions.  It can only work as you use it.

That means money you invest is your employee.  Every day, its job is to grow bigger and bigger.  While you go about your business, the money is doing all the work.

Unfortunately, the reverse is also true.  When your money is stuck in debt, it’s working against you.  While you eat your lunch, your debt is growing.  As you get ready for bed, you owe just a little more.

Even if you don’t charge a dime to that credit card today, interest rates are working against you.  As Dave Ramsey likes to quote, “the borrower is slave to the lender”.

Debt is always an emergency.

Do some crazy things to get out of debt.  It’s worth some short term discomfort.  Because without debt, interest rates can work in your favor, your money can be your employee, and the power will be returned to you.

Are you treating your debt like an emergency?  What opened your eyes?