How David Escaped $35k in Debt After Divorce 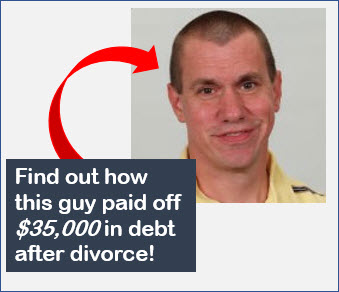 David’s life was rolling along just fine. He married a beautiful woman, had a son, and all in all lived a pretty good life! Sure, he had some debt, but who doesn’t? They could make the payments, and they were sure they’d take care of it eventually.

It really didn’t seem to be that big of a deal….until the divorce.

How David Escaped $35k in Debt After Divorce

Andrew Schrage, the owner of MoneyCrashers.com, recommended that I connect with David just a few weeks ago and I’m definitely glad I did.

David’s story wasn’t unlike many of yours in the fact that he had a pretty sizable debt. What makes David totally different is that he took extreme action against his debt. He slayed the beast, is now standing atop of him, and has the feeling of complete invincibility.

This is where I want you to be.

So what better way to learn how to get out of debt after divorce than from someone that’s actually done it?! David was gracious enough to answer quite a few of my questions in the hopes that it helps you ditch your debt too.

The Interview with David Bakke:

Enjoy the interview and be sure to thank David in the comment section below!

1) I want to start early on in your story. Your life was good. You had a wife, kids, some great stuff (house, cars, etc.?). Was debt a concern for you back then?

Debt was a concern for me back then, but expenses just seemed to come up that we didn’t have the money for. The cost for the birth of our first son (and all the stuff that comes after that) was much more than we expected, and my wife had just finished up school, meaning her student loans had finally come due.

2) What was your your wake-up call that your money life wasn’t stable? Was it the divorce?

The divorce certainly played a role. The cost of an attorney added up in a hurry (yet another unexpected debt). Having to pay child support put another dent in my finances as well.

3) What was the debt? Student loans? Cars?

The majority of the debt was from the birth and upbringing of my son, a portion of student loans, the divorce, and some of it came from credit card balances in general

4) What was your motivation for getting rid of the debt? (For me, I just wanted to break the ties to what once was. I figured that if I got rid of the debt to my ex, the pain would go away, and I could move on with my life. Did you have any of that?)

I think I had grown tired of the fatigue and stress that came along with being in debt. Also, I knew that I would never be able to reach my long-term goals as far as retirement and saving for college for my son with a load of debt hanging over my head.

Related: How to Get Completely Debt Free by 30

5) Tell me the story of the debt pay-off. How quickly did you get rid of $35,000? Did you cut back on your expenses? Did you do anything to boost your income?

It took a little under three years. I got myself on a budget, reduced monthly expenses, and curtailed discretionary purchases. When my phone contract came due, I could have bought a new cell phone for cheap, but did I need it? No. So I kept the old one. I also cut way back on travel, which saved me a ton of money when compared to my past life.

I also did what I could to boost my traditional income and took on a few side gigs to generate extra revenue. Mainly, I started writing personal finance posts for some extra cash, and I scoured the house and sold everything I didn’t need on either Amazon or Ebay, which was shockingly fruitful. All the extra money went straight toward the debt.

6) Looking back, are you glad that you tackled your debt and faced it head-on (not a trick question, but some people just never start and I don’t understand why!!)? Does any part of you wish that you took it more slowly?

I’m glad I tackled my debt and faced it head on. Most people never start because they fear it is too hard, but it really isn’t. I have no regrets in eliminating the debt as quickly as I did.

7) What advice would you give to someone that’s starting to tackle their debt today?

Employ the same strategy as mentioned before. Also, create goals for yourself to hit along the way, and when you reach one, celebrate it with a modest purchase for yourself. That’s a great strategy for staying motivated and on track.

Related: The Absolute Best Way to Get Rid of Debt

8) So you made it to the other side. You’re out of debt, you’ve saved up some money. What’s next? And what are your financial plans for the next 5 years?

I would like to keep up with my retirement savings goals and continue to set aside money for my son’s college expenses – I doubt I could ever have enough in that area. I would also like to work on my emergency fund, which could probably use a little more.

David paid off $35,000 of debt, even after his divorce. It’s truly inspiring. So many others would have thrown up their arms in defeat, “Well, I’ll never get out of debt, and that’s just the way it’s going to be.”

Most of you know my answer to that already — That’s total crap… and David just proved it.

So what else can you take away from David’s story? Quite a few things actually.

Thank you David for sharing your financial success with us! I’m sure you’ve inspired hundreds of people to stop making excuses and to tackle their debt once and for all!

Are you ready to ditch your debt after divorce? It’s definitely possible!