Do You Have a Rich Mindset or a Poor Mindset? (Take the Test to Find Out!!) 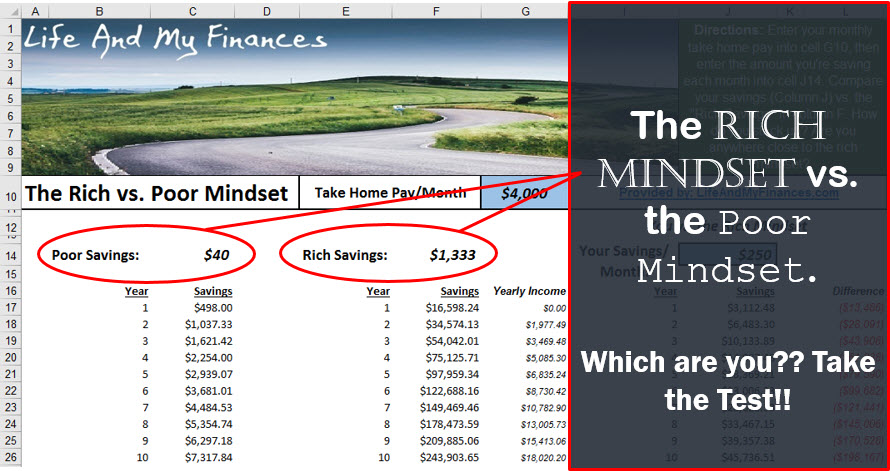 Bob and Jim are identical in almost every way. They’re both tall, thin, semi-athletic, they both love the show “American Pickers”….AND they net exactly $60,000 a year from their day jobs…. But they do differ in one area: How they spend their money.

Do You Have a Rich Mindset or a Poor Mindset?

Bob isn’t out of control with his money – I mean, he always has enough to pay the bills and he actually saves a little bit each month too. In his mind, he’s doing quite well, but in reality he has a poor mindset and saves far less than what’s necessary to be rich.

Jim, on the other hand, has a rich mindset. He knows that simply “paying the bills” isn’t enough to get ahead financially. While Bob only saves 1% of his income each month, Jim saves 33%.

As we already stated before, Bob and Jim earn identical salaries, but their mindsets differ a bit when it comes to their financial decisions in life. Bob has a poor mindset and Jim has a rich mindset.

When it comes down to it, Bob just has a little nicer  lifestyle than Jim:

…and that’s the subtle difference between the future rich, and the future poor

Are you on the path of the rich? Or the path of the poor? The rich take time to think about the affect that their today has on their tomorrow, while the poor simply figure out how to survive today.

That’s it. No science or extensive studies needed.

If you want to be rich in the future, then you’d better sacrifice something today to get there.

How Much Should You Spend on That?

I wrote an incredibly popular piece last year titled, “How Much Should You Spend on That?“. It went pretty viral on Facebook and was also picked up by popular blogs, Rockstar Finance and Life Hacker.

Here’s the gist of the article. Broke people spend money on television , car loans, expensive homes, etc… and they never get ahead because….they never save any money (duh…)! Rich people (no matter their income) save a large portion of their take-home pay and invest everything they save on interest-earning assets. And that’s how they become rich!

So how do you know if you’re saving like a rich person or a broke person? Just enter your income and your spend into this well-known downloadable spreadsheet! Thousands of people have filled out the Excel sheet and immediately realized if their budget resembled the rich or the poor.

It was super helpful for many, but in reality it was only step one…

Do You Have a Rich Mindset? Or a Poor Mindset?

So let’s say the “How Much Should You Spend on That” spreadsheet told you that your spending was more comparable to the poor than the rich.

Your reaction will most likely be:

“Eh, what does this guy know? I think I’m doing alright.”

…You shrug your shoulders, head to another blog, and never think about it again….because you never really realized what was at stake. And it’s because you never got a good look at what you were missing out on.

…This is where step two comes in.

It’s time to understand what you’re missing, and to fill out another spreadsheet!

The Rich versus the Poor Mindset: Downloadable Spreadsheet

As we discovered in the initial post, the rich typically:

So what does this mean for them in the long-term?

…More money than you can imagine. Let’s take a look. 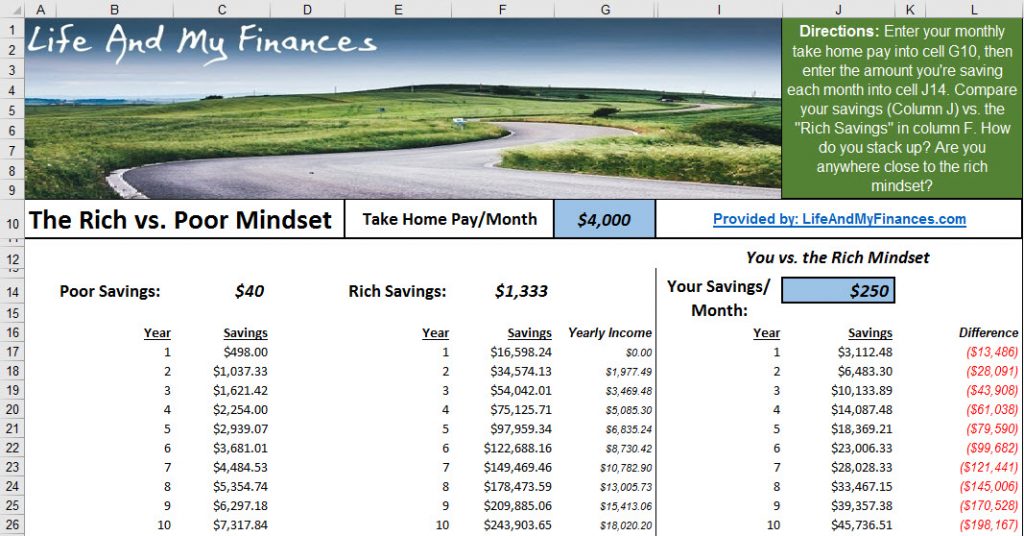 The spreadsheet is called, “The Rich vs. Poor Mindset” and shows the outcomes of a rich mentality vs. a poor one. Put simply, this is the answer to the question:

“If someone with a rich mentality had my income, how much could they actually retire with? Would the result really be that much different from mine?”

Download the spreadsheet here, enter your take-home pay in cell G10 and your typical savings rate each month in cell J14. Then scroll down (if you dare) to see how your investments would fare vs. someone that had a rich mindset.

It’s Time to Take the Challenge!

Here’s the typical. Bobarino thinks he’s doing pretty good by saving $250 a month and auto-loading it into his retirement account. After investing for 40 years and earning 8% interest, Bob acquires $872k. Not too shabby. He could comfortably live on $40,000 a year with this nest egg and never run out of money.

But…if he had the rich mindset, he could have saved up $4.6 million and lived lavishly on $184,000 a year. Caviar, cottages on the lake, and a yacht for cruising the world – all could have been comfortably on $184k a year.

On $40k a year….you could eat out at Carrabba’s once a month…and that’s about it.

So what about you? Are you ready to take the challenge to see how your future savings would compare to the rich mindset?

Do you have a rich or a poor mindset, and how much is it costing you??