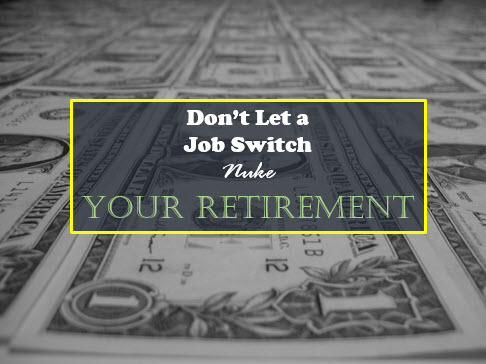 Switching jobs can be tough financially, especially if you didn’t plan on leaving your old job. You lose your steady paycheck and your benefits. You still have all of the bills you had before, and maybe expensive COBRA insurance at the same time.

Even if you start a new job immediately, you may have more time than usual between paydays. And what if you don’t have a new job yet? Experts estimate your job search in terms of how much of an annual salary you’re looking for as one month for every $10,000. That means if you used to earn $70,000 a year, it will likely take you 7 months to find that next job! Ouch!

And suddenly, you remember…you had a retirement account at that old job. You’ve been saving 3, 5, maybe even 10% or more of your salary for years. You really need that money now. Maybe you can just withdraw your retirement early…

Unless you’re moving into your retirement, leave those retirement funds alone. If you don’t, take a look at what happens…

The first thing that happens when you dip into your retirement account is that the IRS (and maybe your state) takes a cut. In the case of the IRS, it’s a big cut.

Once we take it out though, the IRS will tax the distribution as ordinary income. You’ll have to pay your highest marginal tax rate on that distribution. For most retirees, that’s not such a big deal. In retirement, most of us have lower incomes than we had during our working life.

When you’re still working, though, that tends to be a bigger deal.

Plus, unless you’re over 55 when you leave your job or qualify for a few other exceptions, the IRS will charge you an extra 10% on your distribution. So if your earnings put you at a 25% marginal tax rate, you may pay over 1/3 of your 401(k) distribution in federal taxes. And if you live in a state with income tax, you’ll pay even more.

Whoever administers your 401(k) will account for that to some degree. Most of the time, they’ll withhold 20% of your distribution for income taxes.

For most people, though, that’s not enough to cover the bill. Maybe you get a big refund each year, and can just expect a smaller one next tax season. If you usually pay or break even, though, expect a bigger bill.

If you have a Roth 401(k) and want to withdraw your retirement early, you’re in a different tax situation, as long as you’ve had the Roth open for at least five years. Since you’ve been making your contributions after your income taxes were paid, the IRS will let you take your contributions out without taxes or penalties. You’ll be taxed on any gains, dividends, or interest income you withdraw, but you can take back your principal.

If you opened your Roth less than five years ago, though, you’ll pay the same taxes and penalties as someone withdrawing from a regular tax-deferred plan. Yes, that means your contribution amounts have been taxed twice, but those are the rules.

And you’ll still have to face the long-term consequences of an early withdrawal, which are even more problematic.

Someday, you will retire. (I have faith.) Maybe it will be because you’ve saved money and you can afford to do the things you want to do, but maybe not. The gritty retirement truth is that some people retire not because they want to, but because they have to.

Maybe their health no longer allows them to work, or their skills are no longer in demand. But even if you plan to work forever, realistically that may not be possible.

When you retire, you still need money. You still have bills, and while you’ll no longer need to pay for work clothes or a lengthy commute, you’ll still need a place to live, food to eat, etc.

And you’ll still want some fun in your life:

Yet many people retire with far less money than they need to sustain them in retirement. They forgot an important factor:

The only way to fund retirement is to start saving for them while you’re working.

Part of that savings may (or may not) come in the form of Social Security. Most people contribute something to Social Security, and it may continue in some form or other into your own retirement. Even in 2017, though, few can live comfortably on Social Security payments alone. You’re probably going to need more, and that’s the very good reason you’ve been contributing to your retirement up to now.

Related: Should Jim Pay Off His Mortgage with His 401(k)? 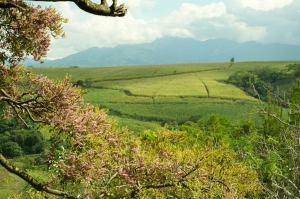 What If My Retirement is Ages Away?

You may think that your retirement won’t come for a long time and that you have plenty of time to save for it.

Retirement may seem a lifetime away, depending on your age. But no money will be able to work as hard for you as the money you put aside when you’re young. The longer you stay in the market, the more time that money has to grow. That’s all thanks to the magic of compounding.

In turn, those new shares generate even more income, which becomes more shares. Eventually, the amount in your account reflects that compounding far more than it does the amount you’ve contributed…but you have to let it keep working.

The longer the money in your account works, the larger it grows.

Yes, the stock market will have some down years. Eventually though, it typically moves higher and you end up in a better position than when you started. Let your investments ride and they will keep working for you.

If you cash out your retirement early, you’re going to have to save a lot more money to end up with the same amount of money in the end. The best thing you can do to ensure you have the money you need when you retire is to leave the money you’ve already saved alone for now and find some other way to pay the bills.

What to Do Instead of Cashing In Your Retirement

First, if you have a job but are just thinking about moving on, prioritize bulking up your savings now. You may need more than your normal emergency fund for a transition. Like Tarzan, don’t let go of one vine until the next is firmly in your grasp. Keep doing good work for your employer until you’ve found a new one. You’ll have put yourself in the best position for moving forward into a better job without stressing your finances.

If you’ve already moved on from your job, do what you can to drop your expenses to the bone. Put a kibosh on any extraneous spending, like dining out or buying new stuff. Try negotiating for better rates on your regular bills, or drop services and subscriptions you don’t have to have.

You’ll probably need to think about the income side of the equation, too. Try raising extra cash by selling stuff you don’t need. Pick up a side hustle, like driving for Uber. You may even need to take a part-time or less lucrative job while you continue to look for the perfect fit.

You may have to struggle to make ends meet, but better to do that now than when you are older and no longer have as many options to save and earn.

As for that old retirement plan?

You have some choices, but they all boil down to keep them in a retirement account until you’re ready to retire.

Whichever option you choose, you’ll keep the tax benefits and the investment growth potential that made your retirement account so attractive in the first place. You’ll have made sure your money continues working as hard as you can.

Future you will thank you.

Did you ever withdraw your retirement early? Have you learned your lesson?

Battle of the Mind Investing