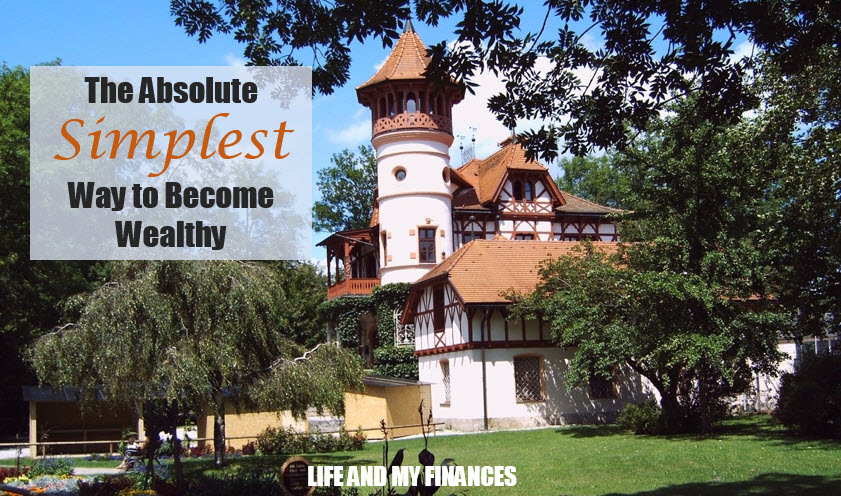 Wanna be rich? Want to know the secret to accumulating great wealth? Then it’s time to stop reading about penny stocks, and it’s certainly time to stop watching Mad Money (spoiler alert, Jim Cramer doesn’t beat the market, which means you probably won’t either).  Instead, let’s look at the absolute simplest way to become wealthy and learn how almost everyone can do it!

Your best bet to accumulating great wealth is by keeping it simple. Believe it or not, but millions have already done it in the past, and millions more will do it in the future. If you want to know the simplest way to become wealthy, then just follow these steps… 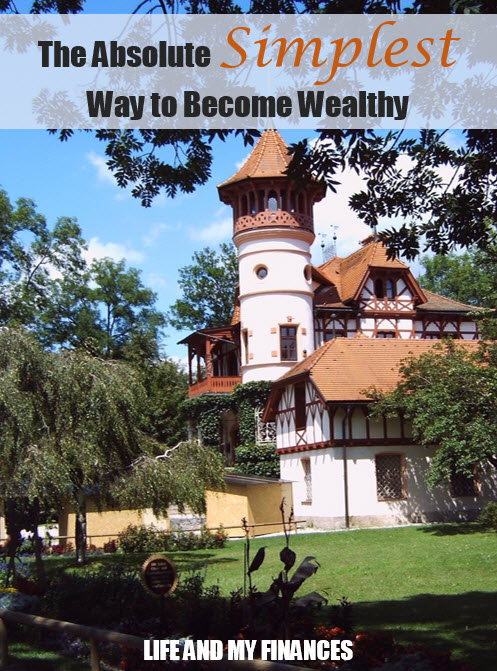 Most advisors tell you to save up a 3-6 month emergency fund first, but most of the people just want to tackle their debt right away because they want it gone.

In my book, both approaches are wrong.

When you’ve got tens of thousands of dollars worth of debt and massive bills to pay, it would take you YEARS to save up 3-6 months’ worth of expenses. You’d burn yourself out before you’d even start tackling your debt!

And, if you just jumped on your debt right away without creating a little buffer, something unexpected would likely happen, which would of course (since you have no emergency fund) drive you right back INTO debt! What a buzz-kill!

Instead of saving a ton of money and instead of saving absolutely NO money, I recommend that people put away just a little bit of cash — $1,000. It’s enough to get you through almost any disaster. Sure, you might have to get a little creative to make the thousand bucks work, but I’ve been there, and it’s absolutely doable.

2) Get Out of Consumer Debt AS FAST AS POSSIBLE

Now THIS is the fun part (Seriously. It’s time add up all the debts, and then SLAY them).

Take a moment and add up all your consumer debts.

Alright, that number is your goal. THAT’s the number that you’re going to pay off in less than 2 years.

To do it, you’ll probably need to cut way back on your spending, and you might even need to take on a part time job, but if you get rid of all this ridiculous debt, you’ll be well on your way to achieving great wealth.

This saving part… it isn’t exciting, and it might even be tough to stay motivated because the goal isn’t quite as defined as paying off the debt. BUT, it’s absolutely necessary if you want to build some serious, long-lasting wealth. This step allows you to KEEP your wealth. It’s your buffer from Mr. Murphy.

We’ll all have emergencies that pop up, but there’s a huge difference between how the wealthy and the broke handle it:

I’ve chosen to handle my emergencies like the wealthy. I mean…wouldn’t you?

Ask your broke friends how to become wealthy, and they’ll likely tell you to…

Again, if you want to know the simplest way to become wealthy, stop listening to your idiotic friends.

Wealth is not this far-fetched dreamland that only the elite can get to. Everyone can buy a ticket, and for a reasonable price! All you have to do is stash away 15% of your income every month. And, since you have absolutely no debt (except your house), that really should be a piece of cake!

So here’s the next big question: What do you invest in?

This can be scary and complex, and it paralyses quite a few people into doing absolutely nothing! But, it really shouldn’t.

My first recommendation would be to check out Vanguard.com. Their fees are low and they have some fantastic Index funds that cost very little, yet perform just as well as the overall market.

If this is still a little too much for you, I recently discovered a gem of a website called, “Wealthsimple” (click the link for the full write-up). Just answer a few questions about yourself and they’ll provide a recommended investment plan. It’s simple, effective, and super easy. I started investing with them just over a month ago and I’ve already earned more than 1% (that’s not too shabby for just 1 month!).

Related: 9 Things the Rich Do That The Poor Do Not

5) Pay Off Your House

Da-da-da-daaaahhh! (sang in a super-hero-enters-the-room type tone). This is my absolute favorite part of all the steps…but it’s probably one of the most disputed steps in personal finance.

It was surreal to not owe anyone ANY MONEY for a while, but it soon became the norm (but now I wouldn’t have it any other way). And, it’s been one of the biggest contributors to our growing wealth today.

Related: Should You Pay Off Your Mortgage Early?

Since then, my wife and I have purchased a rental house with cash and we’re about to buy another! If we would have held onto the mortgage, we would have stashed away far less cash each month and would just be ho-humming along like every other poor sucker on this planet.

If you want to follow the absolute simplest way to become wealthy, I would pay off your house as quickly as possible. You never regret it.

So how fast could you do it? Download this free mortgage payoff calculator and start playing with the numbers. I bet you could pay it off a lot faster than you think!!

After you pay your house off, becoming wealthy is a no-brainer. I mean seriously. I work as a financial analyst making less than $100k a year, and my wife Liz stays at home with our daughter. We spend less than 1/3 of that income to live on (did I mention having no debt is AWESOME??!). The rest…we invest. We’d have to REALLY mess things up at this point NOT to become wealthy.

Figure out what you’d like to invest in (we chose real estate) and keep piling your money there for a few years. Within about 5-10 years of heavy investing, your investments will start earning more money than you do.

…did you catch that??

Your money…that thing that you have very little of today… You could have so much of it that it generates a passive income that’s more than you earn at your day job! Talk about wealthy! And it’s all done very simply. No tricks, no gimmicks, no counting cards at the casino. It’s just hard work mixed in with a simple plan.

Will You Become Wealthy?

The ball’s in your court. I just outlined a plan where almost everyone in this nation can become wealthy.

All you have to do is:

That’s it!! And that’s as simple as it gets.

Will everyone choose to do it? Absolutely not. I mean, what would this world be without that broke friend giving you bad advice? 😉 But if you’re smart and you want to be wealthy, then you’ll ditch the debt, save up some money, and invest heavily.

What do you think about the simplest way to become wealthy? Are you following this plan?