How I Flipped a Car in Just 2 Weeks!! 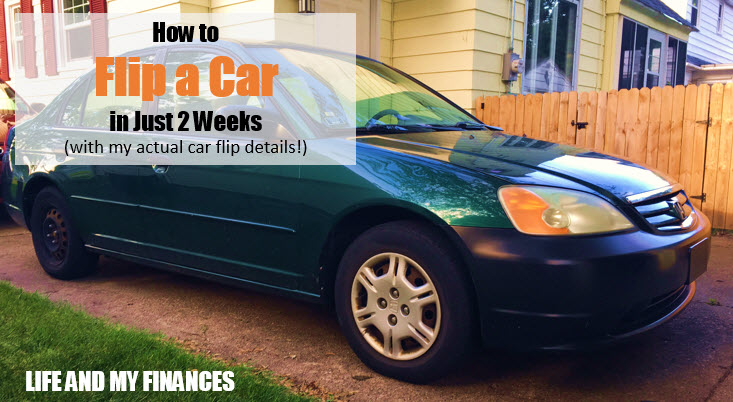 I had made up my mind NOT to buy the car because there was just too much risk there to try to flip it. So, I told him straight up, “Sorry man, the interior’s ugly, the hood is about to fly off the car, and the engine is WAY too rough for my comfort. At this point, my offer would be far lower than you’d accept.”

“Well make me an offer.” He quickly replied.

I paused, thought about all the work that needed to be done and the cost for each item…”$800…” I said with a smirk.

…Apparently I just bought the car, and that’s where this flip began.

If you ever want to flip a car yourself, you’ve got to:

Make a List of What Needs to Be Repaired

If you’re going to flip a car, you’d better have a list of repairs in your head long before you drive the car home. But, once you get there, be sure to formalize this list. Get out the ol’ yellow pad and start writing line by line what you think it’s going to take to get this car in tip-top selling condition.

As far as I could tell at the time, this was my list for the rough-riding 2001 Honda Civic: 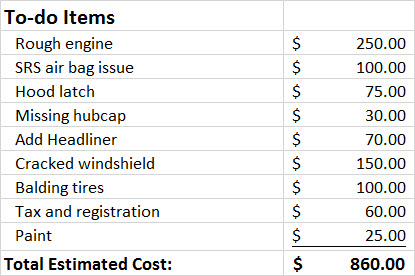 To be completely honest, after writing out this list I was getting a little nervous. I bought this car for $800. If I put another $860 into it, that put me at $1,680. With an estimated selling price of $1,900, that didn’t leave me a ton of room for any incidentals.

BUT, there wasn’t much I could do about it then, so I decided to just get crackin’ and work my way down the list so I could sell this car for some money (Ha…hopefully!)!!

When you’re trying to flip a car and you want to do it fast, you have to be aware of your long lead times and take care of those things first.

In my case, my long lead-time items were:

By hitting each one of these long lead-time items early, I was able to get them all done in about a week, which made it possible to sell the car in a hurry!

Make It Shine and Be Honest

Put yourself in the buyer’s position. Would you want to walk up to a filthy car (inside and out), pay good money for it, and then have to stick your own hands in someone else’s grime?

No, that’s gross. AND, people often think, “If this person never bothered to clean the car, they probably didn’t take care of the motor either…” And, they’ll walk away without ever making you an offer.

Instead, get into that grime yourself.

And beyond this, don’t try to deceive people when you’re selling the car.

Instead, be honest with them up front. Tell them about strange noises they might hear during the test drive and explain what they mean (and why they shouldn’t worry about them). This will make you feel better because you’re not blantently lying to another human being, and it will make them feel at ease because they know they’re buying the car from someone that’s trustworthy. And in the end, it often nets you more money. Crazy how that all works huh?

I drove the car six blocks to get it home. During that short drive, two warning lights came up on the dash (which by the way means the seller went out of his way to deceive me – likely by pulling the battery to clear the codes just before my test drive….grrrrrr).

The warning lights were:

Neither of these were good news, but at an $800 buy, my maximum risk was just $500 since a non-functioning car could still be sold for $300.

So, I put my project manager hat on and got to work immediately.

The Engine and SRS Light

The 6-block drive home from the seller was pretty rough, but the 6 mile drive to the repair shop felt like an eternity. I distinctly remember sitting at a red traffic light, just trying to feather the gas and brake at the same time so my violently shaking car might smooth out a little! Anyway, long story short, I made it to the shop and got the diagnosis.

Score! The cost was only $129 vs. my $250 estimate. Thank goodness the motor was still fine. I was starting to feel a little better about this flip already.

The next roller-coaster ride was the SRS light. The shop called me, told me the issue was in the seat belt, and that they’d probably have to replace it to make the light go off (and so the airbags would actually deploy if you were in an accident…which is kind of important…).

Annnd I pretty much had a heart attack right then and there. But, thank the Lord the conversation continued.

“But…” he said gently, “A lot of times it’s just a dirty sensor. I did my best to clean it out, but the light is still on… Wait, no. My mechanic just told me that it went off. We’ll see if that did the trick.”

I bought the car with a black bumper. It was an eyesore and really needed to be painted. No way was I going to pay a body shop $500 to paint the bumper of an $800 car, so I decided to just do it myself with a few cans of spray paint.

The exact match was $10.89. To cover the entire bumper and a few rust spots on the doors, I probably would have needed to order four cans. Instead, I decided to order just two and paint a close-ish color match on the first couple of layers. 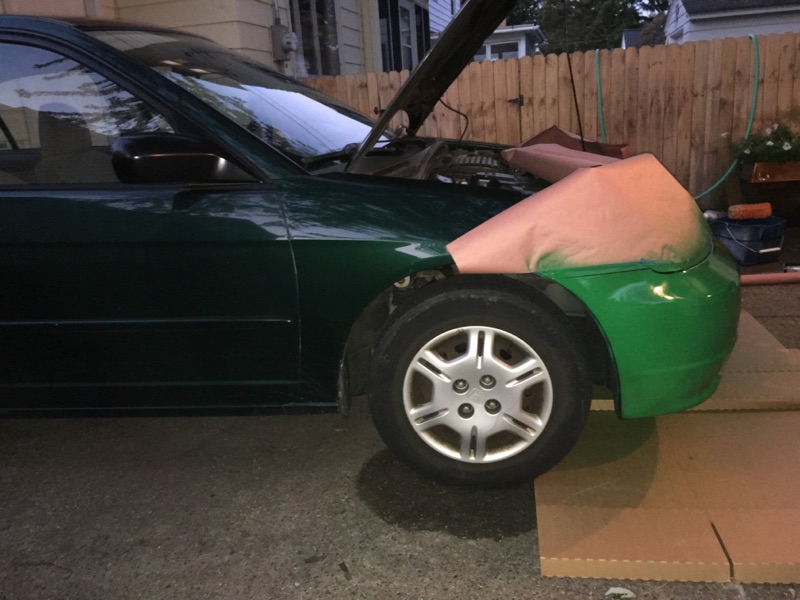 Here’s attempt #2. A much closer match for the base coat. 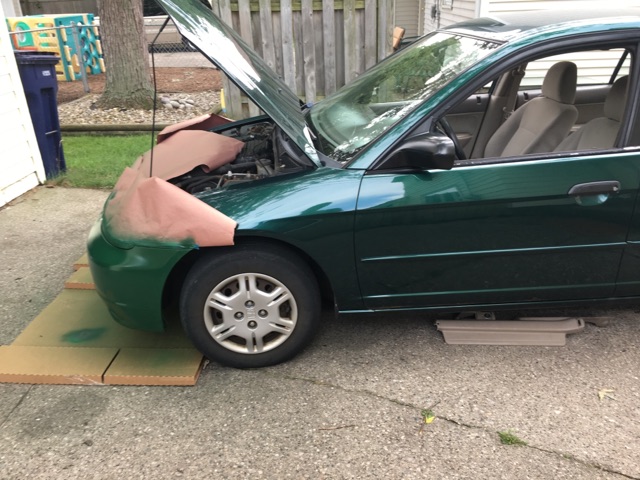 And here’s the final product with the color match paint! Not too shabby, huh?? 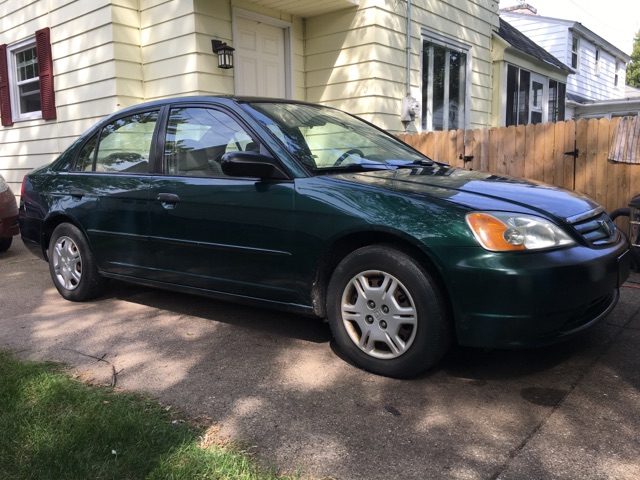 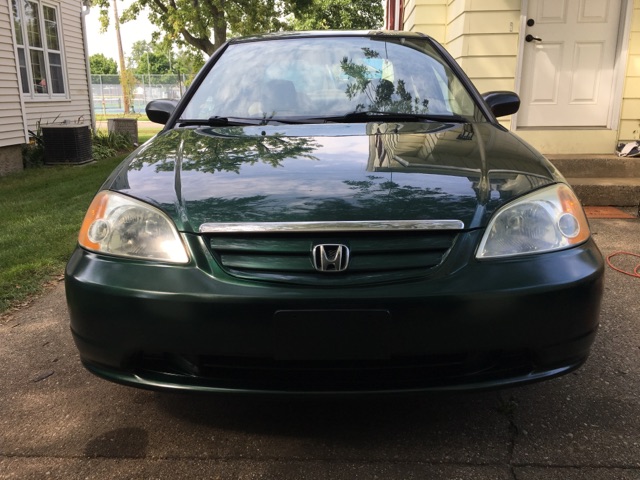 The hood was closing okay, but it just seemed loose once it was shut. Either it wasn’t catching right or the latch welds were coming loose. After a closer inspection, it was the welds.

The initial quote from the auto body shop was $100. Ppbbbbbbb (me making the sounds of an annoyed horse…) – You know what? I’ve got a buddy that I’ve been meaning to visit that owns a welder. Maybe he’d help me out. 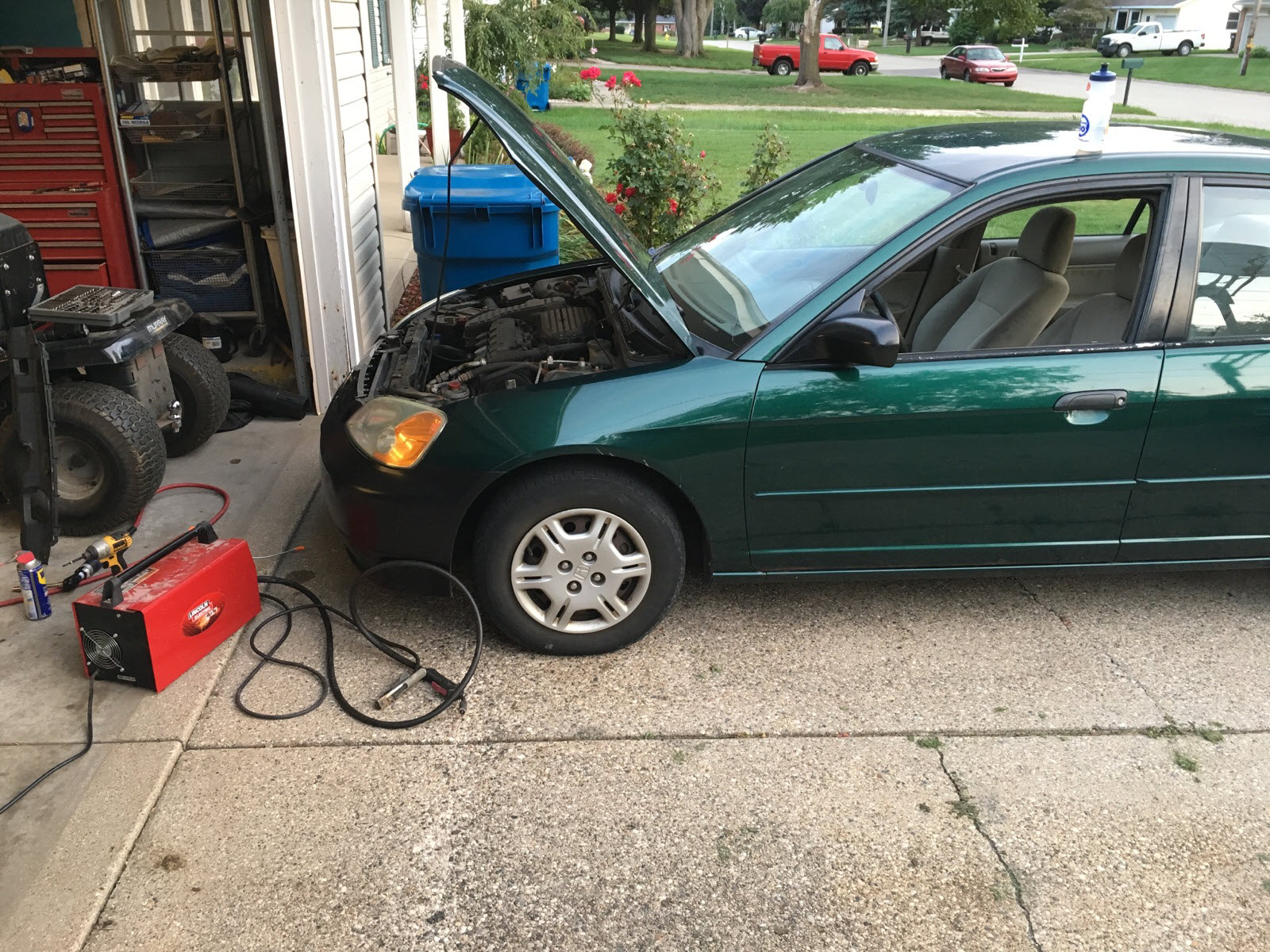 After I got the car home, I decided to start messing around with all the controls to be sure everything was working properly.

Nothin’. (FYI – If you’re going to flip a car, expect to run into something unexpected…this was mine.)

I’ve never encountered this before, but the gas lid lever did absolutely nothing. And, the only other way to open the lid was by going through the trunk, dismantling the side wall upholstery, and literally pulling the plug from the backside. And, after going through the process, this is obviously what the previous owner had been doing and decided not to tell me about. What a jerk.

At the dealership, this repair typically costs between $400 and $500. Was I going to spend that kind of money? Of course not. It was time to consult YouTube (what did we all do before YouTube? I have absolutely no idea…probably spend way too much money on stuff like this!).

Check out my repair below. I had to secure the wire that was leading to the gas flap since it was cracked and separated. 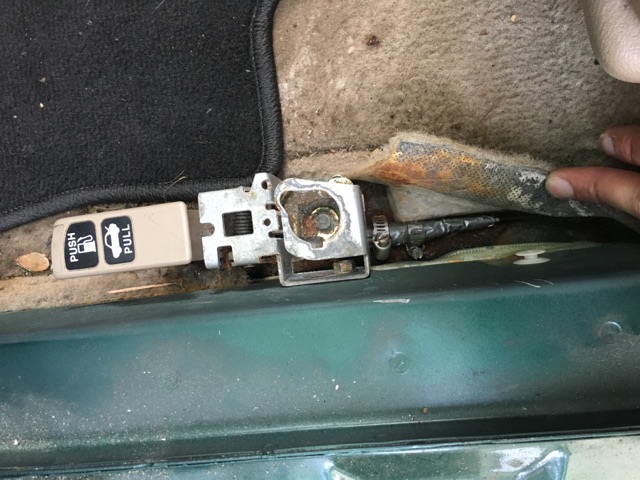 The Actual Costs in Total

Remember the three keys to flip a car?

I decided that the car didn’t really need a new headliner, new tires, or a new windshield. The buyer of this car wasn’t going to expect something perfect. They’d likely want it because the outside doesn’t look too bad, it’s cheap, and it would give them crazy good gas mileage. So, I ignored those three items and took my chances.

Check out the final costs vs. my initial estimates. BOOM! Killing it! Now I just had to make the sale. 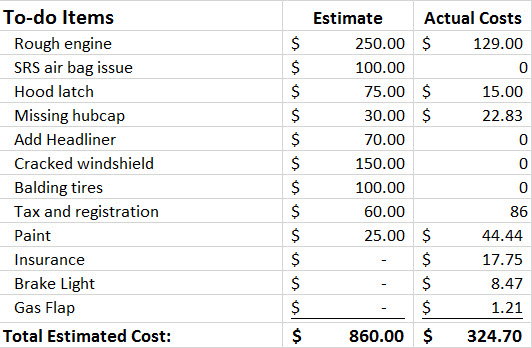 The Selling Process and the Profits

I listed the car for sale on August 26th, just a week and a half after I bought it. Now I just needed a buyer…

Just one day later, I had a guy come to take a look. He liked it, test drove it, but was concerned about the check engine light (for emissions – this is common in older cars) and the balding tires. He left and never came back.

Another day went by and I had another text. This guy was coming right after work on Wednesday. He cancelled.

Finally, I had a guy coming at 8pm on Thursday.

From start to finish, this car flip took me only 2 weeks and 2 days to complete, and I cleared $676.17. (Oh, and for all you nerds out there that are trying to tie out the math and are off by 87 cents, I found that much change in the car and added it to my list of profits!. 🙂 )

Another successful story! What do you think? Will you ever try to flip a car?